PR Newswire – NEW YORK – June 16th, 2015 – Hosted by Ted Allen, Chopped Grill Masters and Chopped Teen Tournament return for second seasons on Food Network with special five-part themed tournaments. Sixteen grilling professionals from around the country face off in Chopped Grill Masters, premiering Tuesday, July 14th at 10pm ET/PT. With a $50,000 grand prize on the line, the stage is set for the ultimate grilling showdown, as the chefs head out of the kitchen to compete outdoors over three rounds, consisting of an appetizer, entrée and dessert, with recurring Chopped judges Scott Conant, Alex Guarnaschelli, Chris Santos, and special guest judges Amy Mills and Tim Love deciding the fates for each grilling pro. The winner from each episode will face-off in the fiery finale. When the dust clears, the greatest grilling pro of all walks away with $50,000. 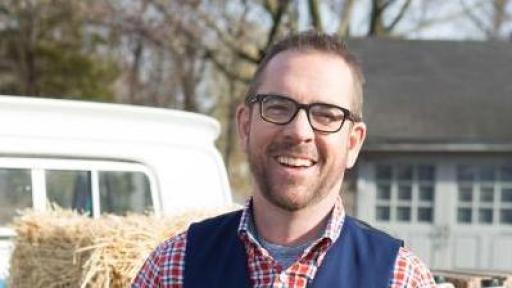 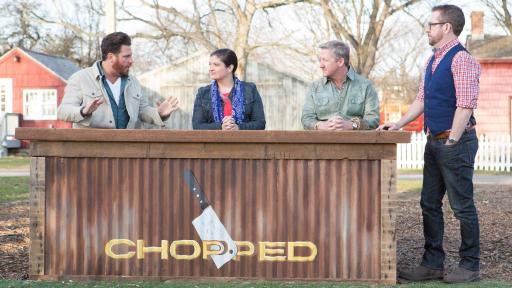 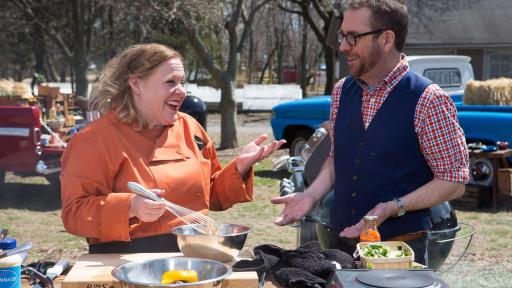 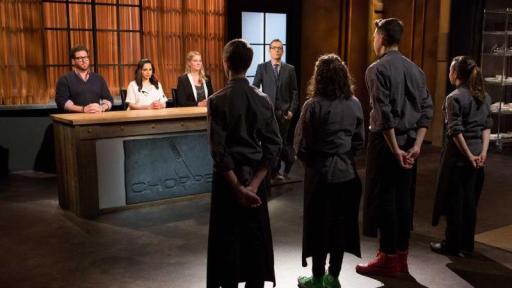 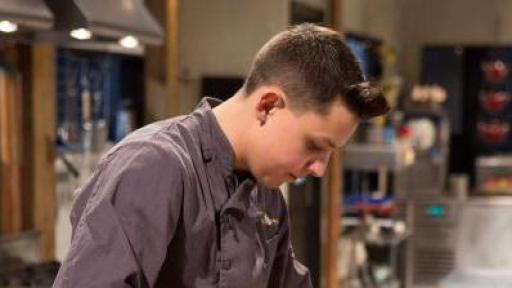 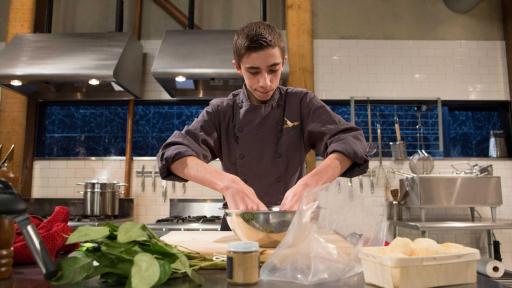 Looking to add a little heat to the kitchen as summer comes to a close, sixteen talented teenagers bring their extreme energy and ambition to Chopped Teen Tournament, premiering Tuesday, August 25th at 10pm ET/PT. Through this five-part stunt, the sixteen culinary whiz kids are aiming for perfect appetizers, entrées, and desserts, as they navigate through three rounds, utilizing ingredients that could stump even top professionals. The teen winners from each episode will head to the finale with a chance at winning the grand prize of $25,000. Judges Maneet Chauhan, Scott Conant, Amanda Freitag, Alex Guarnaschelli and Chris Santos help grade each teen’s dish, based on taste and creativity. In the end, one teen joins the ranks as the new Teen Chopped Grand Champion!

Visit FoodNetwork.com/Chopped to meet the competitors and find exclusive content including a fan poll, winner interviews, behind-the-scenes photos, highlights and photo galleries of top moments. Join in on all the fun at #Chopped.

Chopped Grill Masters:
Premiering Tuesday, July 14th at 10:00pm ET/PT - TOURNAMENT PREMIERE!
“Grill Masters: Episode One”
In this explosive first Grill Masters battle, big personalities and old rivalries create a firestorm in the al fresco kitchen. In the first round, the chefs have two different proteins to prepare: pork chops and sausages. Exercising restraint with a sweet basket ingredient in the entrée round is a challenge for some of the chefs. A cheese and a starch are two of the items that the finalists must make sing on the grills in their desserts.
Competitors: Danielle Dimovski, Chris Hart, Staci Graves Jett, Randy Pauly
Host: Ted Allen
Judges: Scott Conant, Amy Mills, Chris Santos

Premiering Tuesday, July 28th at 10:00pm ET/PT
“Grill Masters: Episode Three”
Two of the competitors in this Grill Masters fight are engaged to be married, but can they both make it to the final round? In the first round, a succulent seafood and an odd ice cream are two of the surprises in the mystery basket. Then in the second round of live-fire cooking, the chefs are shocked to find a live ingredient. When a delicate ingredient flames up on the grill in the dessert round, can one chef’s dish be salvaged?
Competitors: Donna Fong, Leslie Roark Scott, Harry Soo, Tom Spaulding
Host: Ted Allen
Judges: Scott Conant, Alex Guarnaschelli, Tim Love

Premiering Tuesday, August 4th at 10:00pm ET/PT
“Grill Masters: Episode Four”
Four grilling experts compete for a final spot in the grand finale, for a chance at winning $50,000. Spare ribs play the lead role in the appetizer basket. Then a specially-sourced, whole fish barely fits into the entrée baskets. And following the round that the judges were not thrilled with how an ingredient was being used, the judges are plum happy to see plums in the dessert basket.
Competitors: Mike Davis, Ash Fulk, Phil Johnson, Angie Mar
Host: Ted Allen
Judges: Scott Conant, Amy Mills, Chris Santos

Premiering Tuesday, August 11th at 10:00pm ET/PT - TOURNAMENT FINALE!
“Grill Masters: Grand Finale”
The four finalists are facing off for the $50,000 grand prize. These Grill Masters are expecting difficult baskets, and they certainly get them. Rattlesnake is the vicious surprise in the first round. Some offal and fruit are part of the culinary puzzle to solve in the entrée round. And a breakfast item and a classic pie beg to be transformed in the dessert round to determine the new grilling champion!
Host: Ted Allen
Judges: Scott Conant, Alex Guarnaschelli, Chris Santos

Chopped Teen Tournament:
Premiering Tuesday, August 25th at 10:00pm ET/PT - TOURNAMENT PREMIERE!
“Teen Tournament: Episode One”
In this first preliminary competition, a strangely fuzzy ingredient is one of the surprises awaiting the young chefs in the appetizer round. Then in the entrée round, a challenging protein must be paired with a processed cheese. And the judges become increasingly concerned for the last two teens, who encounter a number of problems combining chips and candies into yummy final dishes.
Competitors: Franco Fugel, Yazmene Kaylani, Anna Mindell, Theo Vicioso
Host: Ted Allen
Judges: Maneet Chauhan, Scott Conant, Amanda Freitag

Premiering Tuesday, September 1st at 10:00pm ET/PT
“Teen Tournament: Episode Two”
Four new culinary whiz kids enter the Chopped kitchen, as expensive crustaceans are a bit of a shocker in the appetizer baskets. Nerves and mishaps plague the entrée round, and one of the young competitors gets very flustered with the sharpness of the knives and the scarcity of time allotted to complete creative lamb dishes. The two teen chefs who make it to the dessert round must create yummy, sweet dishes with a frozen treat and an Indian spice.
Competitors: Nino Asaro, Alyssa Chacon, Peter Wenger, Salma Zahran
Host: Ted Allen
Judges: Maneet Chauhan, Scott Conant, Amanda Freitag

Premiering Tuesday, September 8th at 10:00pm ET/PT
“Teen Tournament: Episode Three”
This group of competitors are particularly young, just 13 and 14 years old. But they quickly impress the judges with their flavors, poise, and seemingly boundless ambition in and outside of the kitchen. In the appetizer round, the teens must grapple with vegan chicken. The entrée round finds the remaining three teens daringly slicing into big butternut squashes and working out their mixed feelings about okra. There’s a special delivery in the dessert basket: a box of assorted cookies, which the teen chefs are tasked with repurposing into dishes that also include walnuts and plums.
Competitors: Alexina Chasin, Allison Lee, Eliza McKelvey, Jarren Pross
Host: Ted Allen
Judges: Scott Conant, Alex Guarnaschelli, Chris Santos

Premiering Tuesday, September 15th at 10:00pm ET/PT
“Teen Tournament: Episode Four”
With just one spot left, four new talented teen chefs have set their sights on the last remaining place in the grand finale!  The heat is on in the appetizer round when they find a spicy protein and a strong pepper in the basket. The judges find it difficult to watch without offering help, as the teen chefs tackle an entrée basket that includes thick veal chops and beautiful heirloom tomatoes. Then a classic candy bar and a sweet fruit juice that the teens had never before tried are two of the ingredients at play in a very competitive dessert round.
Competitors: Justin Ballenger, Danny Ganzman, Olivia Neumark, Veronica Seguin
Host: Ted Allen
Judges: Scott Conant, Alex Guarnaschelli, Chris Santos

Premiering Tuesday, September 22nd at 10:00pm ET/PT - TOURNAMENT FINALE!
“Teen Tournament: Grand Finale”
The final four, fearless young culinary hopefuls, return to compete for $25,000 and the title of Chopped Grand Champion! Excitement is at an all-time high, as the teen chefs open the first baskets and find a pasta, some jarred seafood, a candy, and a veggie. Breaking down a giant fish is a daunting way to begin the entrée round, and scant use of a certain other basket ingredient could mean elimination for one of the young returning champs. Then in an intense dessert round, the two remaining teens compete to turn “mocktails” and a festive cake into a $25,000 dessert.
Host: Ted Allen
Judges: Amanda Freitag, Alex Guarnaschelli, Chris Santos

Chopped is produced by Notional Entertainment.

FOOD NETWORK (www.foodnetwork.com) is a unique lifestyle network, website and magazine that connects viewers to the power and joy of food. The network strives to be viewers' best friend in food and is committed to leading by teaching, inspiring, empowering and entertaining through its talent and expertise. Food Network is distributed to more than 100 million U.S. households and up to 35 million unique web users monthly. Since launching in 2009, Food Network Magazine's rate base has grown tenfold and is now the second largest monthly magazine on the newsstand, with over 11.6 million readers. Headquartered in New York, Food Network has a growing international presence with programming in more than 150 countries, including 24-hour networks in the United Kingdom, Asia, and the Europe, Middle East and Africa (EMEA) region. Scripps Networks Interactive (NYSE: SNI), which also owns and operates Cooking Channel (www.cookingchanneltv.com), HGTV (www.hgtv.com), DIY Network (www.diynetwork.com), Travel Channel (www.travelchannel.com) and Great American Country (www.gactv.com), is the manager and general partner.