PR Newswire – NEW YORK – July 20, 2015
Guy Fieri hosts some of the biggest stars from Food Network and Cooking Channel in special summertime stunt, Guy’s Grocery Games All-Stars, premiering Sunday, August 23rd at 8pm ET/PT on Food Network. Each of the five episodes features four culinary all-stars competing in a number of challenges as they navigate their way through the aisles of a grocery store with curveballs from games such as the Fieri Food Pyramid or the feared Food Wheel. Whether it is preparing an upscale dinner using frozen and canned foods, making a noodle dish from the clearance carts or creating a dinner using ingredients from the produce aisle only, each All-Star chef has to shop, prepare, and plate three different dishes using only what they can grab from the grocery store aisles. One-by-one the losing All-Stars check out, determined by a rotating panel of judges that includes Richard Blais, Melissa d’Arabian, Duskie Estes, G. Garvin, Troy Johnson, Beau MacMillan, Brian Malarkey, Catherine McCord and Aarti Sequeira. In the fifth and final episode, each All-Star is teamed up with a professional athlete, giving them even more of a sporting chance to be the victor and go on a shopping spree for a cash prize for their charity! 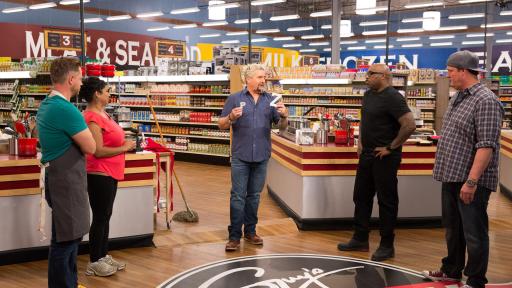 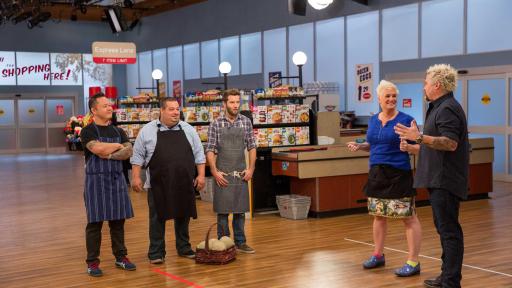 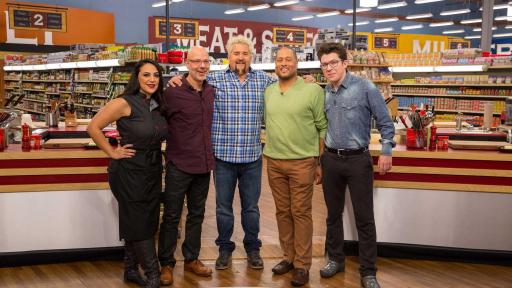 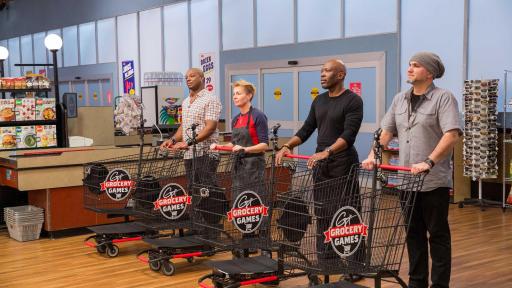 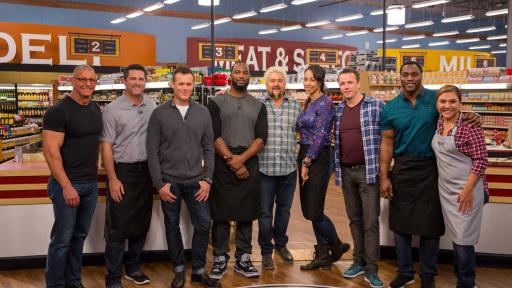 Fans can head to FoodNetwork.com/GroceryGames to relive video and photo highlights, take quizzes and much more. Join the conversation on Twitter using #GroceryGames.

Premiering Sunday, August 23rd at 8pm ET/PT
“All-Stars: Flavortown Flips Over the Judges!”
Guy Fieri turns the tables on the show's All-Star judges by making Richard Blais, G. Garvin, Beau MacMillan and Aarti Sequeira compete in the kitchen! First, they must eat their words and prepare an international lunch using only items that begin with the letters P and Z! Then, they must prepare a decadent dinner using only ingredients from the produce aisle. The two finalists must prepare a family meal that includes three strange ingredients from the Fieri Food Pyramid. The winning judge learns how challenging the Shopping Spree really is as they race to earn up to $20,000 for their charity of choice.
Judges : Duskie Estes, Troy Johnson, Catherine McCord

Premiering Sunday, August 30th at 8pm ET/PT
“All-Stars and A-Lister Dinners”
Culinary titans Anne Burrell, Eric Greenspan, Jet Tila and Marcel Vigneron are not spared Guy Fieri's twists when a bowling game selects some strikingly bizarre ingredients for a hearty lunch. Next, the chefs have to think outside the boxed foods and make their best dish using processed items from the middle aisles of the store. Then, the chefs experience real highs and lows when the feared Food Wheel determines the high-end and low-end ingredients in their A-list dinner. The winning All-Star chef goes on a shopping spree for charity worth up to $20,000.
Judges: Duskie Estes, Troy Johnson, Brian Malarkey

Premiering Sunday, September 13th at 8pm ET/PT
“All-Stars in the Aisles”
Guy pulls no punches when he challenges All-Star chefs Madison Cowan, Elizabeth Falkner, Aaron McCargo Jr., and Michael Psilakis to make an upscale dinner using the double whammy of frozen and canned foods! Next, it’s time for multiple cart swaps in a weekend brunch edition of musical carts! Then, the remaining two All-Stars must turn a kernel of an idea into their best dish using 1 ingredient – corn, in 2 different ways, with ingredients from 3 aisles. Our winning All-Star shops for up to $20,000 for their charity.
Judges: Richard Blais, Duskie Estes, Troy Johnson

Premiering Sunday, September 20th at 8pm ET/PT
“All-Stars Team Up with Pro Athletes”
Four professional athletes pair up with celebrity chefs including Rich Aurelia with Robert Irvine, Marcel Reece with Brian Malarkey, Jennifer Lacy with Marc Murphy, and Takeo Spikes with Lorena Garcia for one of the biggest All-Star lineups Guy’s Grocery Games has ever seen! These dynamic duos are challenged to make a winner’s dinner using only 7 items after going through the express lane. Next, a toss of the dice determines what these pairs of pros must use for their pre-game meal! Then, teams race the store relay-style, grabbing only one ingredient at a time, to create their best cheat day dish! The winning team will get the chance to sprint through the aisles for up to $30,000 for charity!
Judges: Troy Johnson, Beau MacMillan, Aarti Sequeira

FOOD NETWORK (www.foodnetwork.com) is a unique lifestyle network, website and magazine that connects viewers to the power and joy of food. The network strives to be viewers' best friend in food and is committed to leading by teaching, inspiring, empowering and entertaining through its talent and expertise. Food Network is distributed to more than 100 million U.S. households and up to 35 million unique web users monthly. Since launching in 2009, Food Network Magazine's rate base has grown tenfold and is now the second largest monthly magazine on the newsstand, with over 11.6 million readers. Headquartered in New York, Food Network has a growing international presence with programming in more than 150 countries, including 24-hour networks in the United Kingdom, Asia, and the Europe, Middle East and Africa (EMEA) region. Scripps Networks Interactive (NYSE: SNI), which also owns and operates Cooking Channel (www.cookingchanneltv.com), HGTV (www.hgtv.com), DIY Network (www.diynetwork.com), Travel Channel (www.travelchannel.com) and Great American Country (www.gactv.com), is the manager and general partner.