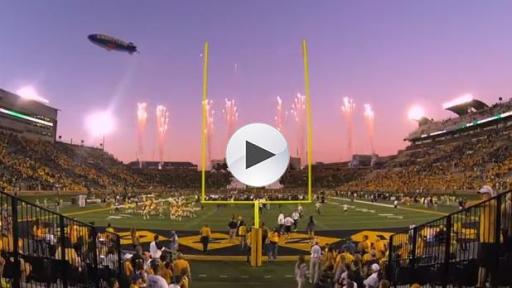 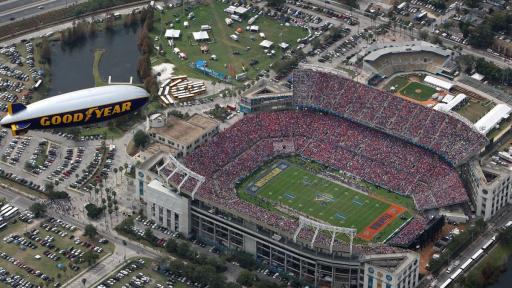 The Goodyear Blimp first provided stunning aerial views of the 1955 Rose Bowl, revolutionizing the way fans experience sporting events. In the years since, Goodyear’s iconic airship has covered some of the biggest matchups in college football history, offering its own unique perspective of the action on the ground. It has evolved into a football tradition of its own, with fans often correlating the magnitude of the game with the Goodyear Blimp flying overhead.

Goodyear’s season-long marketing program highlighting college football’s best traditions will kick off this weekend in Dallas with the Goodyear Blimp overhead at the AdvoCare Classic. The matchup features top contenders Alabama and Wisconsin, both of whom will strive to be back in Dallas on New Year’s Eve playing in the Goodyear Cotton Bowl Classic, a semi-final game in the College Football Playoff.

The “traditions” theme is evident in Goodyear’s newest advertising, which highlights some of the most iconic traditions in college football, including: Texas Tech’s Masked Rider; Penn State’s White Out; Texas A&M’s 12th Man; USMA’s Army Cannon; the University of Colorado’s running of Ralphie the Buffalo; and the University of Oklahoma’s Sooner Schooner, among others.

“Goodyear has a strong tradition of innovation and game-changing performance, both on the road and in the air,” said Gary Melliere, Goodyear’s general manager of sponsorships. “This year we’re celebrating college football traditions that inspire superior performance, and we’re inviting fans to come along for the ride.”

Goodyear is one of the world’s largest tire companies. It employs about 67,000 people and manufactures its products in 50 facilities in 22 countries around the world. Its two Innovation Centers in Akron, Ohio and Colmar-Berg, Luxembourg strive to develop state-of-the-art products and services that set the technology and performance standard for the industry. For more information about Goodyear and its products, go to www.goodyear.com/corporate.