PR Newswire, ATLANTA (July 9, 2015)
It’s time to break out the spots and cow bells for Chick-fil-A®’s 11th annual Cow Appreciation Day event on Tuesday, July 14. On that day, customers who show their spots and dress as a cow will eat free at Chick-fil-A’s more than 1,900 restaurants nationwide.

Customers who aren’t too “chicken” to dress completely as a cow will receive a free Chick-fil-A meal (breakfast, lunch or dinner), which includes an entrée of choice, a side item and a beverage. For those who come partially dressed in cow attire, such as a cow-spotted purse, hat or other accessory, Chick-fil-A will award a complimentary entrée.

Customers can visit www.CowAppreciationDay.com to prepare for the occasion. The site offers cow costume ideas and tips, as well as downloadable cow spots, headbands and other bovine-themed accessories. Fans also can leverage social media channels to post pictures of their costumes using the hashtag #CowAppreciationDay.

“Cow Appreciation Day is the one day where it’s okay to dress ‘udderly’ crazy and get rewarded for it,” said Jon Bridges, Chick-fil-A’s senior vice president and chief marketing officer. “The event also affords our guests the chance to explore our newer, healthier menu options, such as our Grilled Chicken Sandwich or Grilled Nuggets, or our classic Chicken Sandwiches and Chicken Nuggets.  Customers have the choice of our entire menu as a reward for dressing like a cow for the occasion.” 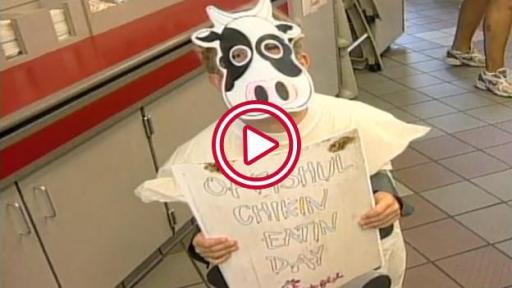 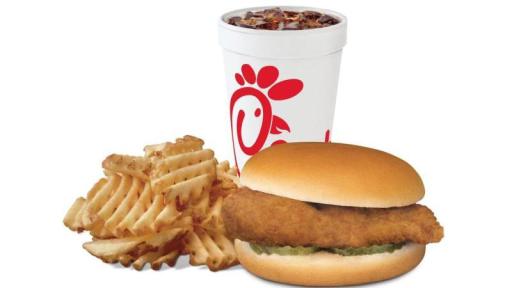 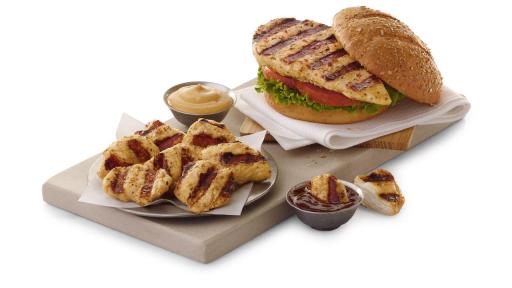 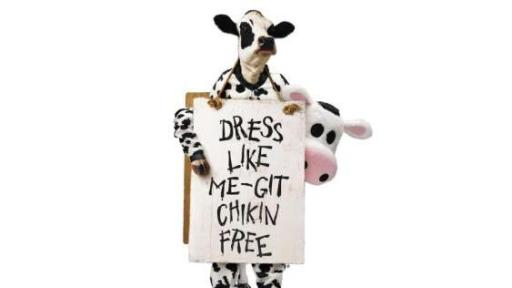 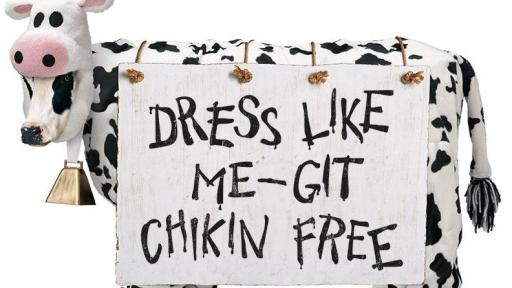 More than one million cow-clad customers stampeded Chick-fil-A restaurants across the country last year — a record Bridges says is a true indication of the passion Chick-fil-A customers have for the brand as well as the iconic cow-themed “Eat Mor Chikin®” marketing campaign celebrating its 20th anniversary this year.

Chick-fil-A first introduced the Cow campaign in 1995 as a three-dimensional billboard concept depicting a black-and-white cow sitting atop the back of another cow painting the words “Eat Mor Chikin” on the billboard.  Since the first billboard two decades ago, the “Eat Mor Chikin” Cows have reached millions on television, radio, the internet and the occasional water tower to become one of America’s most popular advertising icons and a member of New York’s Madison Avenue Advertising Walk of Fame.

Get your cow spots ready to celebrate #CowAppreciationDay for FREE @Chick-fil-A on Tuesday, July 14, 2015. www.cowappreciationday.com Tweet

While Chick-fil-A’s cow campaign has remained consistent for the past two decades, the restaurant continues to evolve to meet the growing needs and preferences of customers.  By the end of 2019, Chick-fil-A will exclusively serve chicken raised without antibiotics. The company and its suppliers have collaborated to ensure that suppliers never directly administer antibiotics within their operation at any time, making Chick-fil-A’s “No Antibiotic Ever” commitment the strongest in the industry. The chain also removed high fructose corn syrup from the entire menu, preservatives from its cooking oil, and artificial colors from its dressings and sauces.  In 2008, Chick-fil-A became one of the first quick service companies to remove all trans-fats from its menu.

About Chick-fil-A, Inc.
Atlanta-based Chick-fil-A, Inc. is a family owned and privately held restaurant company devoted to serving the local communities in which its restaurants operate. Known for its original chicken sandwich and unique franchise model, Chick-fil-A serves freshly prepared food in more than 1,900 restaurants in 42 states and Washington, D.C.

Founded in the early 1960s by S. Truett Cathy, Chick-fil-A produced sales of nearly $6 billion in 2014, which marks 47 consecutive years of sales growth. Chick-fil-A was recognized in 2014 as one of America’s “Top 20 Most Admired Brands” by The Harris Poll, “Top Fast Food Chicken Chain” by Consumer Reports and the only restaurant named to 24/7 Wall Street’s “Customer Service Hall of Fame.” More information on Chick-fil-A is available on the chain’s website located at www.chick-fil-a.com.