LAS VEGAS CELEBRATES THE RETURN OF THE KING

PR Newswire, LAS VEGAS – April 27, 2015
On the 59th anniversary of Elvis Presley’s first Las Vegas performance, Graceland opened the doors to a multi-faceted, authentic Elvis experience that showcases the man, the performer and the music that revolutionized popular culture around the world. “Graceland Presents ELVIS: The Exhibition - The Show - The Experience” opened Thursday, April 23 at Westgate Las Vegas Resort & Casino, the same hotel where Elvis performed more than 600 record-breaking, sold-out shows between 1969 and 1976 when it was the International Hotel and then Las Vegas Hilton.
Read More 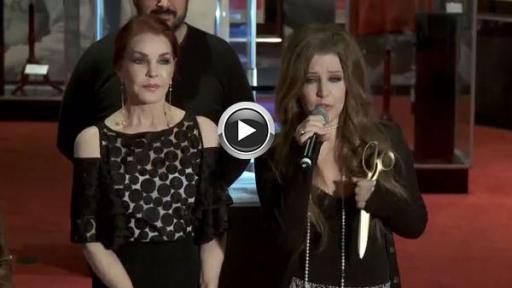 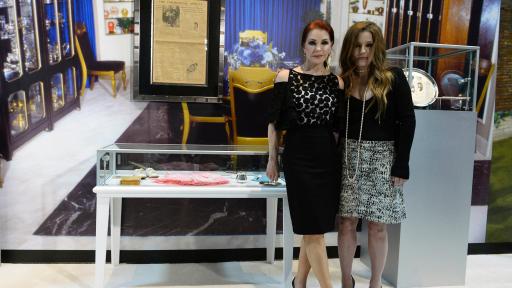 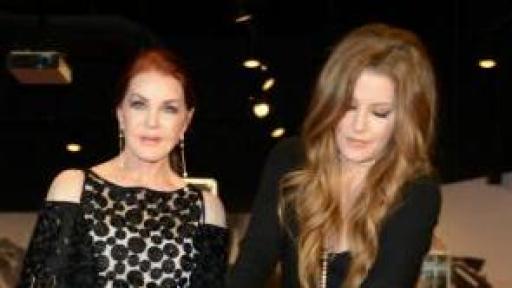 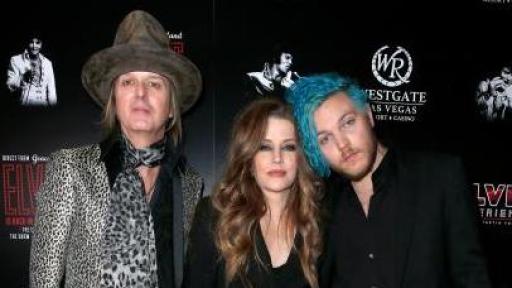 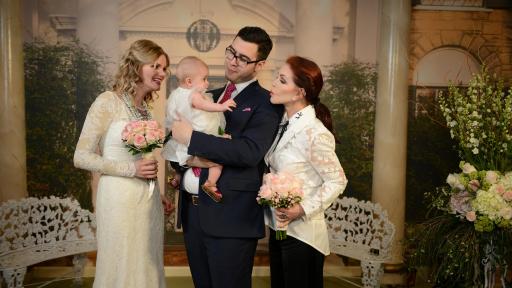 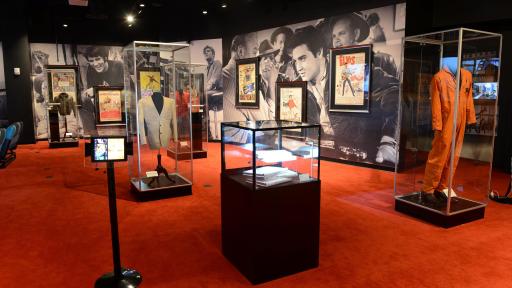 Elvis on the road 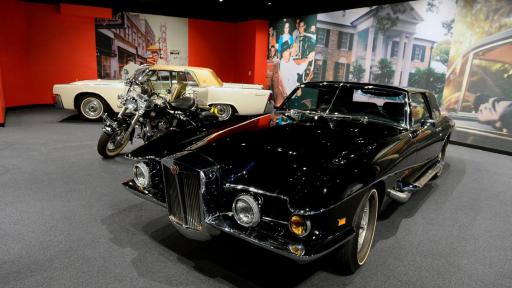 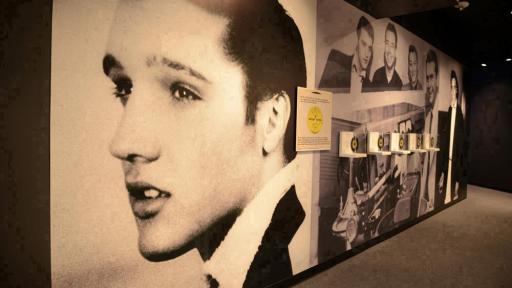 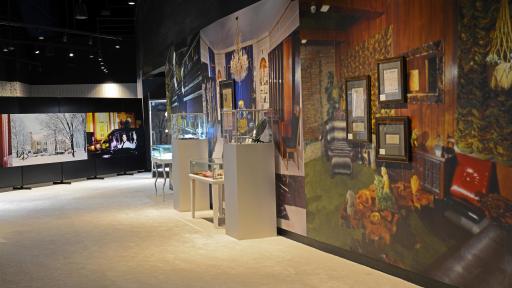 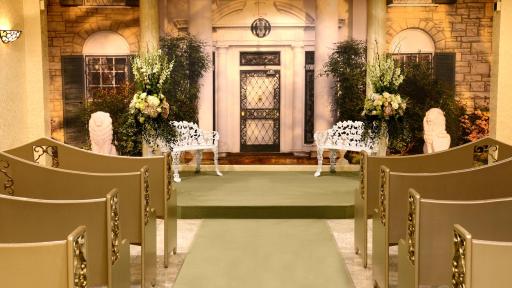 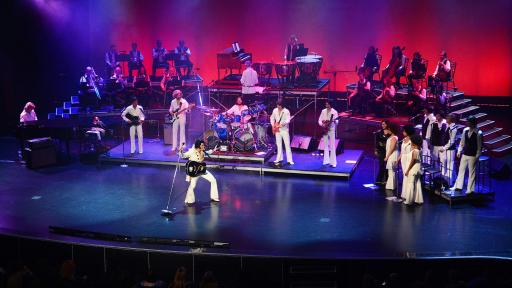 “Just think, it was 59 years ago that Elvis performed his first show in Las Vegas,” said Priscilla Presley. “Elvis loved Las Vegas and he loved his fans – he would be the first to welcome you to this great exhibition of his life. Lisa and I are so happy to share these wonderful artifacts from our family with you and are thrilled to bring the authentic Elvis back to Las Vegas for the first time in 40 years.”

FIRST PERMANENT ELVIS EXHIBITION OUTSIDE OF GRACELAND
The first-ever permanent Elvis exhibition outside of Graceland encompasses more than 28,000 square feet and includes hundreds of artifacts from the Presley family’s treasured Graceland Archives. The exhibition takes visitors on an unprecedented journey through Elvis’ life and career, beginning with his early days in Tupelo, Mississippi through his first recording session in Memphis, rise to fame, Hollywood career, life at Graceland, the Las Vegas years and more. Graceland-produced videos immerse guests in the experience, concluding with a 26-minute retrospective film featuring Elvis’ greatest performances. Select artifacts will be rotated regularly with artifacts from the Graceland Archives to ensure the exhibit is constantly evolving and remains fresh. The exhibition is open seven days a week from 10 am to 10 pm. Tickets are priced at $22 plus taxes and fees, and are available for purchase at Graceland.com/Vegas.

ELVIS PRESLEY’S GRACELAND WEDDING CHAPEL
Elvis Presley’s Graceland Wedding Chapel at the Westgate is the first chapel outside of Graceland to be operated by Elvis Presley Enterprises. Couples can be joined together in an atmosphere of southern hospitality unique to the Graceland experience.

Winners of a nationwide contest by NBC’s Today Show, Kaycee Satava and Cameron Baker, were the first couple to be married at Elvis Presley’s Graceland Wedding Chapel the morning of April 23, with Priscilla Presley serving as matron of honor. Kaycee became an Elvis fan as a child, when she would listen to his music and watch his movies as she took medication for a health condition that forced her to be immobile for long periods of time.

Wedding and vow renewal packages for Elvis Presley’s Graceland Wedding Chapel have been specially designed to bring the authentic and memorable Graceland wedding experience to Las Vegas. For information on booking the chapel for a wedding or vow renewal ceremony, visit Graceland.com/Vegas.

ELVIS EXPERIENCE LIVE MUSICAL PRODUCTION
The newly renamed and renovated Elvis Presley Theater at the International Showroom is now featuring the critically acclaimed “Elvis Experience,” produced by LCQ Productions, on the very stage where Elvis performed for millions of guests during his record-breaking, seven-year stint from 1969 through 1976. The theater has been restored to have the same look and feel it had when Elvis performed in this historic showroom.

Elvis Experience is a large-scale production replicating one of Elvis’ legendary Las Vegas shows, starring actor Martin Fontaine and featuring 24 musicians and eight choir members portraying the original musicians and artists on stage with Elvis. Elvis Experience performs Tuesdays through Thursdays at 7:30 p.m. and Fridays and Saturdays at 8:00 p.m. Tickets are on sale now and start at $49 plus taxes and fees. Following this limited engagement that will end May 30, the property will feature other limited-run, Graceland–produced live shows in The Elvis Presley Theater.

Joel Weinshanker, Managing Partner of Graceland Holdings, LLC, stated, “In a country without royalty, there has truly only been, and continues to be, one king – Elvis Presley. And now in Las Vegas, there is only one place to see the real thing, at the Westgate Resort & Casino.” He continued, “I can promise each and every visitor to our Elvis exhibition, live shows and chapel, an experience that will make them want to come back time and time again, as well as take a trip to Memphis to visit the one and only Graceland.”

To purchase tickets now for the exhibition and “Elvis Experience” live show, and for information about the wedding chapel packages, please visit Graceland.com/Vegas. For more information or to book accommodations at the new Westgate Las Vegas Resort & Casino, call toll free at (800) 732-7117 or log on to www.westgatevegas.com.

Videos and photos from the grand opening festivities will be loaded to the following MediaSilo account throughout the day.

Web Address: https://elvispresleysgraceland.mediasilo.com
Username: Media_EPE
Password: Elvis1935
Assets can be found under the PROJECTS tab in the LAS VEGAS folder.

ABOUT GRACELAND AND ELVIS PRESLEY ENTERPRISES, INC.
Elvis Presley’s Graceland, in Memphis, is music’s most important and beloved landmark, with hundreds of thousands of fans from around the world visiting the historic home each year. Elvis Presley Enterprises, Inc. (EPE) manages the operations of Graceland, its related properties, including the recently-announced Guest House at Graceland 450-room hotel to be built in Memphis, as well as the Graceland Archives, featuring thousands of artifacts from Elvis’ home and career. EPE also produces and licenses Elvis-themed live events, tours and attractions worldwide, including “Direct from Graceland: Elvis at The O2” in London, and the upcoming “Graceland Presents ELVIS: The Exhibition – The Show – The Experience” coming to the Westgate Las Vegas Resort & Casino. Graceland Holdings LLC, led by managing partner Joel Weinshanker, is the majority owner of EPE. In 2013, Graceland was voted the #1 Iconic American Attraction by USA Today and 10Best.com readers. For more information on EPE and Graceland, visit graceland.com.

ABOUT WESTGATE LAS VEGAS RESORT & CASINO
The Westgate Las Vegas Resort & Casino, a legendary world-class destination adjacent to the Convention Center, offers a unique blend of entertainment, excitement and amenities. The property hosts more than 200,000 square feet of meeting space amid an iconic casino featuring the world’s largest race and sports SuperBook®, eight restaurants and the entertainment mix of The Elvis Presley Theater at the International Showroom, and Westgate Cabaret. Westgate Las Vegas Resort & Casino is currently undergoing a property-wide $100 million renovation starting with 300 timeshare units, the International Bar and 1,200 signature rooms. For more information or to book accommodations, contact us toll free at (800) 732-7117 or online at www.westgatevegas.com.