Le Dragon de Quintus has landed in the Saint-Emilion property

April 30th, 2015 - Le Dragon de Quintus, is the magical emblem of this outstanding vineyard, as well as the name of Château Quintus's second wine. It is symbolised by a statue that is both impressive and majestic, in keeping with the mythological figure of the dragon. The statue is mounted on the site of the former Tour de Guet at Quintus.

The property's privileged location on a promontory, where a watchtower once stood to ensure the defence of the village of Saint-Emilion, inspired the name of the vineyard. It also reflects the certainty that Quintus has a truly outstanding terroir, a treasure that needs be protected.

Western myths describe dragons as very intelligent beasts, protectors blessed with tremendous vision. As a guardian of a fabulous terroir, overlooking a panorama that stretches as far as the eye can see, the dragon is a symbol rooted in the estate's history. It was thus chosen to represent Château Quintus and gave its name to the second wine. A statue of a dragon has now been mounted in the heart of the estate, as if returning to its original habitat.

Conceived by Prince Robert de Luxembourg, President of Quintus SAS and Domaine Clarence Dillon, and created by renowned animalier sculptor Mark Coreth, Le Dragon de Quintus has descended from the sky in order to watch over the destiny of this estate for all eternity.

Quintus's emblem also recalls another heraldic animal dear to Saint-Emilion, the one that features on the shield of the village: a golden leopard brandishing a silver sword.

Nearly 4 years were necessary in order to breathe life into this Dragon, which by its size makes it one of the biggest bronze sculptures representing this theme: 4m50 in height, more than 6m wide, nearly 3m in length, with a weight of 2 tons. The HVH foundry, located in the small village of Horni Kalna in the beautiful surroundings of East Bohemia, casts bronze sculptures using the lost wax technique. For the size, the shape and the position of its wings, Mark Coreth used his experience as a pilot to imagine them.

Were it not in bronze, Le Dragon de Quintus could easily take flight. 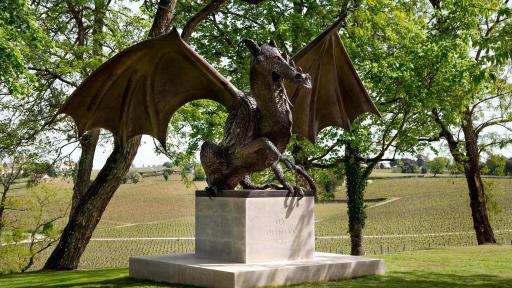 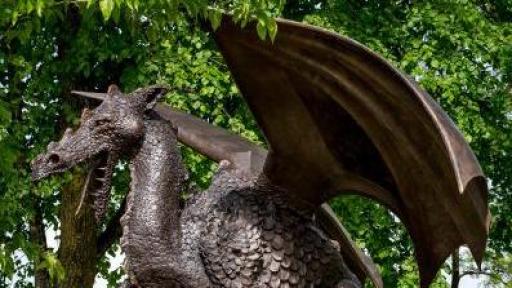 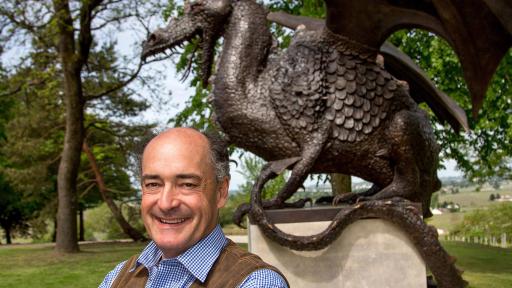 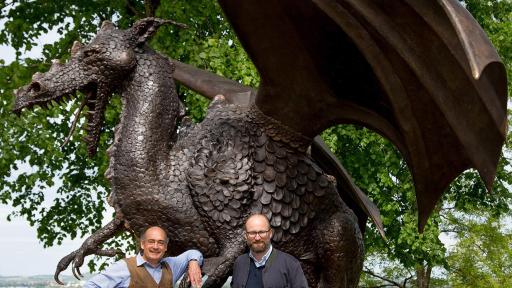 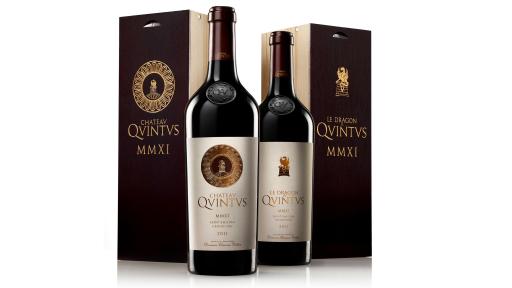 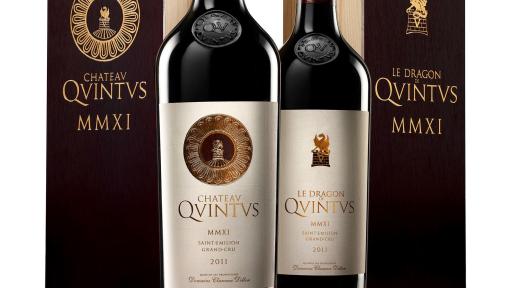 Mark Coreth was born in London in 1958, but grew up in Kenya on the family farm, surrounded by free-ranging animals. Mark undoubtedly owes his huge passion for animals to his idyllic childhood.

After graduating from Ampleforth College, he joined the Blues and Royals cavalry regiment of the British Army and went on to serve in Windsor, Ireland, Germany, Cyprus, and during the 1982 Falkland Islands war.
Upon his return to England, he was asked to sculpt a horse emblematic of his regiment, then another bronze sculpture, presented to the Duke and Duchess of York as a wedding present by the Household Cavalry. These initial orders pointed him towards a vocation as a sculptor of animals.

Although Mark Coreth had no formal artistic training, his intrinsic talent comes through thanks to unremitting work and a keen perspicacity forged by his childhood in Kenya.

His sculptures reflect his intuitive understanding of animals. He captures action, their speed, tranquility, suffering, and passion with incredible verisimilitude, and is now internationally recognized as a master sculptor of animals in movement.

In the words of the artist:

"Creating the dragon for Quintus has amounted to four years of adventure, starting slowly with ideas and designs, then developing them towards the finished piece. The dragon was not based on any other image or tradition but from my and Prince Robert's imagination. I have taken so many of the experiences that I have had while travelling and sculpting wildlife in the field and combined them into one creation."

His works are regularly exhibited at the Sladmore gallery in London. Between two exhibitions and a special order, Mark loves to travel to find inspiration.

Highly skilled pilot, he loves piloting his Jodel airplane for his travels.

In June 2011, the family-owned firm of Domaine Clarence Dillon, owners of Château Haut-Brion and Château La Mission Haut-Brion, acquired a beautiful estate in Saint-Emilion, which they renamed Château Quintus. The purchase of a neighbouring estate in October 2013 united two outstanding vineyards, and Château Quintus, with 28 hectares of vines an average of 30 years old, is now well on its way to achieving its ambition as one of the greatest wines of Saint-Emilion.

Quintus has a history that dates back to the earliest days of Saint Emilion. Both vineyards were considered Saint-Emilion First Growths between 1868 and 1949 (Cocks et Féret) and were among the finest estates to earn the Gold Medal for Saint-Emilion in the Exposition Universelle de Paris of 1867.

By renaming the estate Château Quintus, Domaine Clarence Dillon paid homage to glorious predecessors. It was the custom of the Gallo-Romains, who first planted vines in Saint-Emilion, to name their fifth child Quintus (meaning "fifth" in Latin). Château Quintus naturally takes its rightful place alongside the great red and white wines of Château Haut-Brion and Château La Mission Haut-Brion to become the 5th child in this illustrious family.

Château Quintus is located in the southwest extremity of the Saint-Emilion plateau, perched on a limestone promontory 62 metres in altitude. It features a lovely, sweeping view of the surrounding region, overlooking the famous village and as far as the eye can see along the Dordogne Valley.
The neighbouring estates on the southern side of the plateau – which unquestionably has the best sun exposure – are among the most famous in Saint Emilion. The originality of this outstanding terroir is due to the diversity of soils, slopes, and orientations.
Merlot accounts for 66% of vines in production (surface area), Cabernet Franc 26%, and Cabernet Sauvignon 8%.

Since the acquisition of the vineyard, Château Quintus has benefitted from the same expertise Domaine Clarence Dillon has applied to Château Haut-Brion and Château la Mission Haut-Brion for decades.

Created in 1935, the family-owned and managed company, Domaine Clarence Dillon, has the unique privilege of producing five rare and exceptional estate wines: two red wines and two white wines from First Growth, Château Haut-Brion and its sibling Château La Mission Haut-Brion. Since the 2011 vintage, the company is also proud to represent one of the finest wines from Saint Émilion: Château Quintus.

As wardens of three mythical Estates, steeped in close to two millennia of history, the family company strives to have this deep heritage reflected in all of the wines produced under its name. Domaine Clarence Dillon combines tradition with innovation in order to extract the quintessence of an exceptional terroir and produce comprehensive families of authentic wines that are defined by their complexity and elegance.

At the end of 2015, Domaine Clarence Dillon’s scope of activities will broaden with the creation of two new companies, both based in the Hôtel Dillon, an elegant “Hôtel Particulier” (private mansion) located at 31, avenue Franklin D. Roosevelt in Paris, just opposite Le Grand Palais, and only metres from Les Champs Elysées. This beautiful Mansion will give visitors a chance to discover the world and culture of Domaine Clarence Dillon thanks to its gourmet restaurant, « Le Clarence », and the « La Cave du Château » wine shop that will feature a wide selection of wines sourced exclusively from the greatest terroirs of France.