PR Newswire – SKILLMAN, N.J., August 18, 2015
In a continued effort to help consumers better understand aging skin, RoC® Skincare, an anti-aging pioneer, has partnered with independent research firm, Sperling’s Best Places, to release the second annual Wrinkle Ranking. The 2015 RoC® Wrinkle Ranking determines the U.S. states where the residents’ skin are most at risk from damage caused by lifestyle, occupational and environment factors. While last year’s study highlighted the 50 most wrinkle-prone cities, the 2015 ranking transcends city limits – determining a given populations’ propensity for wrinkles based off the state in which they reside. 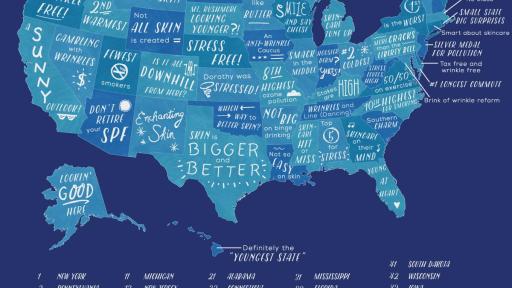 Where You Live Could Make You More or Less Wrinkle-Prone 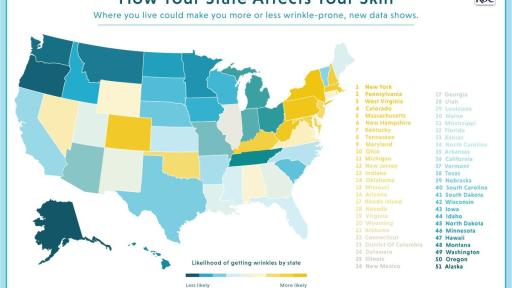 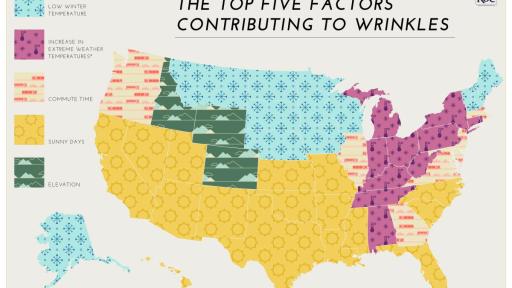 According to New York City-based board-certified dermatologist, Dr. Debra Jaliman, MD, FAAD, “Residents of every state have their share of positive and negative skin health factors so the exact cause of wrinkles can vary. However, there are several factors that can increase the rate at which skin ages, including high levels of stress, dangerous exposure to pollution and UVA/UBA radiation.”

To determine those U.S. states with conditions most hazardous to skin, RoC® and Sperling performed a state-by-state assessment to analyze influences that may increase or decrease ones proclivity for wrinkles. The analysis included factors commonly known to cause skin damage such as UV exposure, as well as other factors such as geographic elevation, daily commute times, stress levels and ozone pollution. Each state was awarded a “Wrinkle Index” which is a measure of each state’s vulnerability to skin damage and premature aging.

Consumers can use the Wrinkle Ranking findings to understand what might be causing their skin to age, and take the necessary steps to mitigate future risk:

While investigating which factors had the most impact on a state’s ranking, the study results showed:

Most Wrinkle-Prone States in America:

About the RoC® Skincare Wrinkle Ranking:
To determine the states where residents’ skin are most at risk from damage by their lifestyle and environment, RoC® Skincare and Sperling’s Best Places performed a meta-analysis, which combines the findings of original research with existing related research in the field of the study. Lifestyle, occupational and environmental criteria that directly and indirectly relate to skin damage were used, and factors were weighted by relevancy to skin damage risk. All data was adjusted by the current population to arrive at “per capita” figures, providing an accurate comparison between states of varying sizes. Each state in the study received points for each of the criteria based on their relation to the other state’s scores in that data category, and Category scores were weighted and aggregated to determine an overall “Wrinkle Index” score to rank the U.S. states.

About RoC® Skincare:
RoC® Skincare has been a leading French skincare brand for more than 50 years, devoted to developing anti-aging products that guarantee visible and lasting results for healthier, younger-looking skin. Considered a pioneer in visibly reducing the appearance of wrinkles, the brand was the first to stabilize and patent pure retinol in a cosmetic product and has continued to improve its aesthetics, tolerance and efficacy over the past 25 years. Strong partnerships with dermatologists have contributed to the brand’s expertise in understanding skincare and developing clinically proven products, which are highly effective, yet suitable for most skin types.

Visit RoCSkincare.com and Facebook.com/RoCSkincare for more information on RoC® Skincare.

About Sperling’s BestPlaces:
Bert Sperling has been helping people find their own “Best Place” to live, work and retire for nearly 30 years. His research firm, Sperling's Best Places, puts facts in the hands of the public so they can make better decisions about best places to live, work, retire, play, or relocate. He has authored bestselling books rating and ranking places, and his website www.bestplaces.net helps over a million visitors each month.