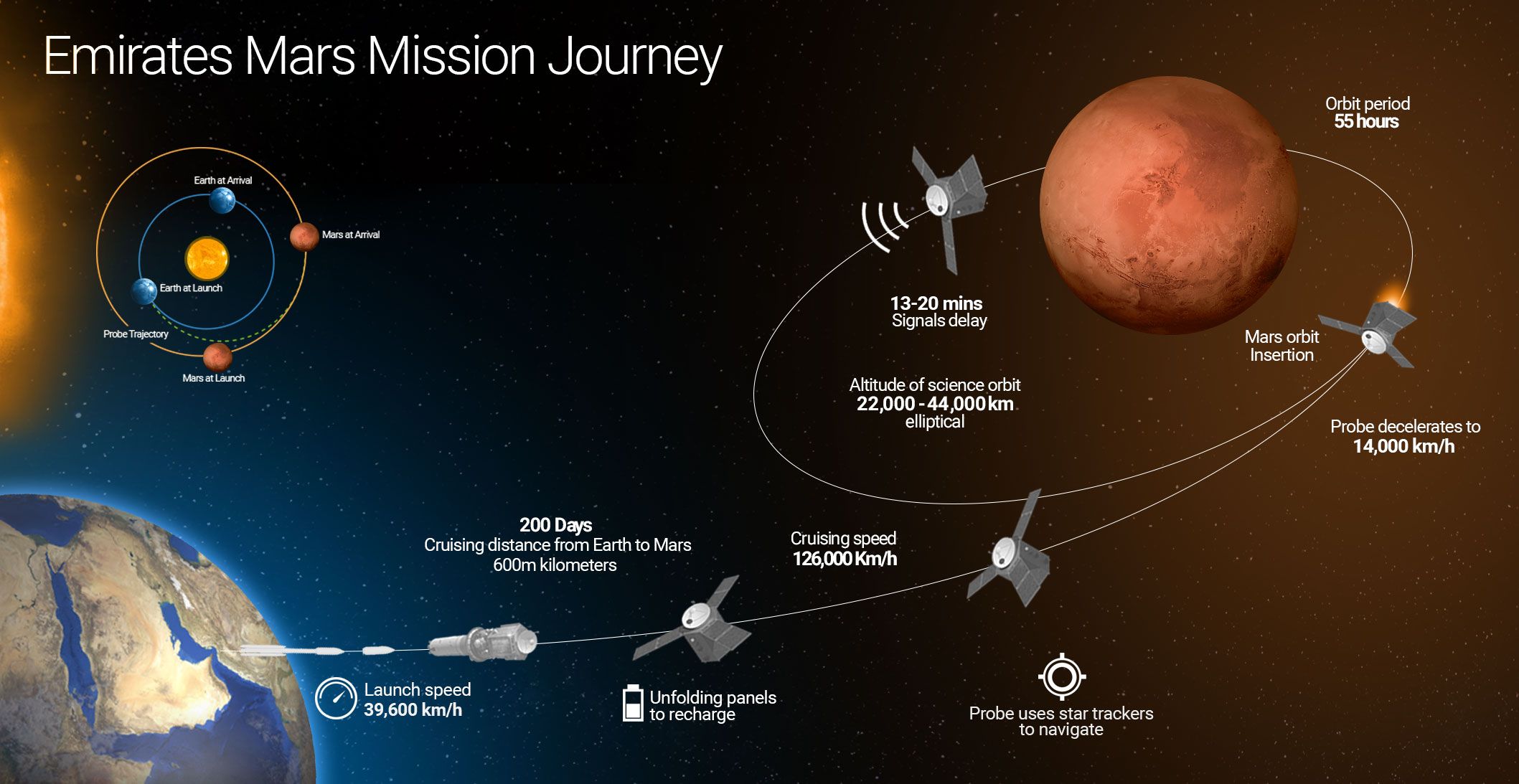 DUBAI, UAE, 6 May 2015 – The blueprints and science goals for the first Arab mission to Mars have been revealed for the first time. The probe, named “Hope”, will create mankind’s first integrated model of the Red Planet’s atmosphere.

The announcement featured presentations from the Emirates Mars Mission team in the presence of high-level delegations headed by His Highness Sheikh Mohammed bin Rashid Al Maktoum, Vice President and Prime Minister of the United Arab Emirates and Ruler of Dubai.

“This probe represents hope for millions of young Arabs looking for a better future. There is no future, no achievement, no life without hope,” His Highness Sheikh Mohammed bin Rashid said. “The Emirates Mars Mission will be a great contribution to human knowledge, a milestone for Arab civilisation, and a real investment for future generations.” 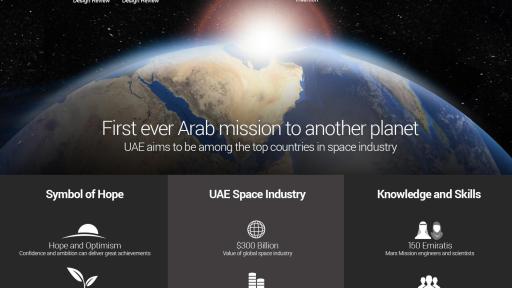 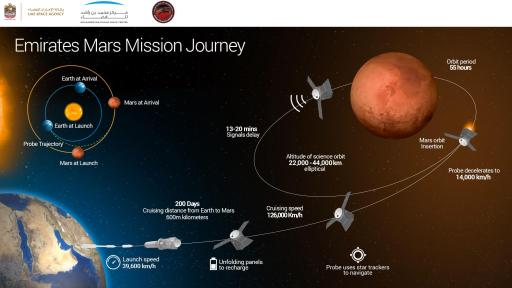 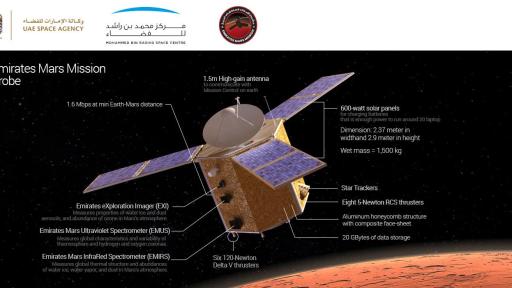 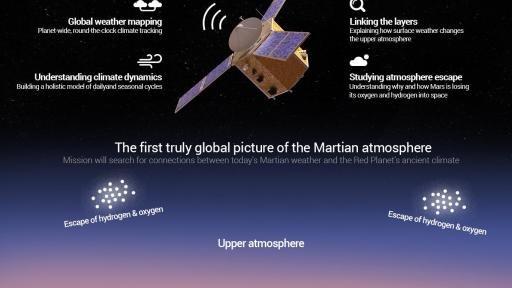 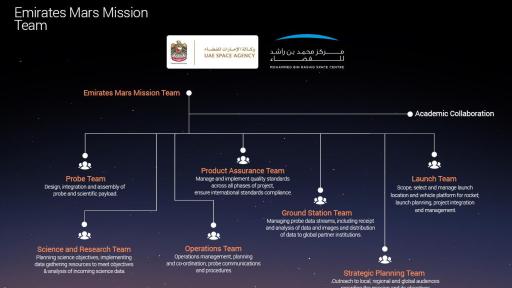 The unmanned probe will leave Earth in 2020 on a mission designed to complement the science work of other missions and fill important gaps in human knowledge. Its unique orbits and instruments will produce entirely new types of data that will enable scientists to build the first truly holistic models of the Martian atmosphere. These models will help the global Mars science community to unlock more mysteries of the Red Planet, such as why its atmosphere has been decaying into space to the point that it is now too thin for liquid water to exist on the surface.

Besides deepening human knowledge about Mars, the data will also help climate scientists understand changes in Earth’s atmosphere over millions of years. This knowledge will also help space scientists to evaluate the atmospheres of thousands of newly discovered planets far across the galaxy, to determine which may have an atmosphere that could support extra-terrestrial life.

The Emirates Mars Mission will be the first to study dynamic changes in the Martian atmosphere throughout its daily and seasonal cycles. Its specialised instruments will enable scientists to observe weather phenomena such as clouds and dust storms, as well as changes in temperature, dust, ice and gases including water vapour throughout the layers of the atmosphere. They will learn for the first time how the atmosphere interacts with topography, from the highest volcano peaks to the vast deserts and the deepest canyons.

The probe will be a compact spacecraft the size and weight of a small car. It will blast off in a launcher rocket, then detach and accelerate into deep space. It will reach a speed of 126,000 kilometres per hour for the 600 million km journey around the sun to Mars, which will take around 200 days.

The probe will orbit the Red Planet until at least 2023, with an option to extend the mission until 2025. It will send back more than 1000 GB of data to be analysed by teams of researchers in the UAE, and shared freely with more than 200 institutions worldwide for the benefit of thousands of space specialists.

The Emirates Mars Mission will leave behind a major legacy on Earth, because the mission is being planned and managed in the UAE by a 100% Emirati team. In this way it is designed as a catalyst for a new generation of Arab scientists and engineers, and as an anchor project for the growing science and space sectors.

The Emirates Mars Mission team currently comprises 75 Emirati engineers and researchers and will grow to more than 150 by 2020.

“The first message is for the world: that Arab civilisation once played a great role in contributing to human knowledge, and will play that role again.”

“The second message is to our Arab brethren: that nothing is impossible, and that we can compete with the greatest of nations in the race for knowledge.”

“The third message is for those who strive to reach the highest of peaks: set no limits to your ambitions, and you can reach even to space.”

His Highness Sheikh Mohammed announced that the probe would be called “Hope”, a name chosen after the Arab world was invited to submit suggestions in a public campaign.

“We thank everyone who participated and wanted to be part of this great historic project to send the first Arab probe to Mars. Everyone who took part is a partner in this mission,” His Highness Sheikh Mohammed bin Rashid said.

Also present was His Excellency Dr Khalifa Mohammed Thani al Rumaithi, Chairman of the Board of Directors at the UAE Space Agency, who commented: “The UAE Space Agency, given its administrative and financial responsibility, will work side by side with the mission team and all the strategic partners to see this mission executed in the time given and the budget allocated through implementing best practice for space projects so that the mission achieves its purpose and goals.”

Further details can be found at www.emiratesmarsmission.ae.