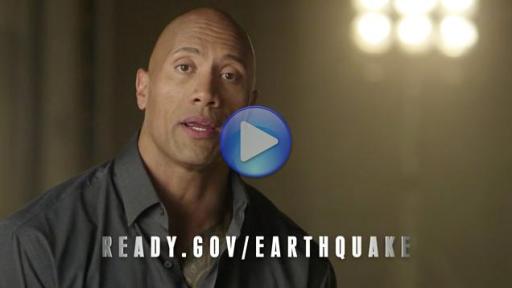 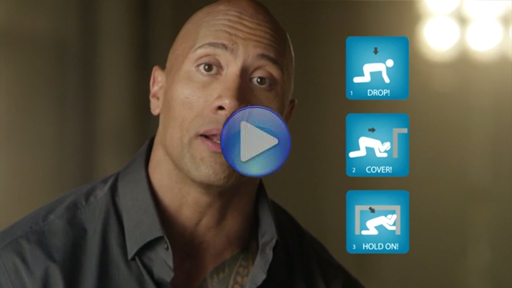 Dwayne Johnson Joins Forces with FEMA and the Ad Council to Encourage People to Drop, Cover and Hold On During an Earthquake

“As a father, safety is always a top of mind issue for me,” said Dwayne Johnson. “That’s why I am proud to be partnering with FEMA and the Ad Council, to make sure as many people as possible know what to do in the event of an earthquake. They can happen anywhere in the U.S. without warning, so if you ever find yourself in the middle of one, remember – drop, cover and hold on.” 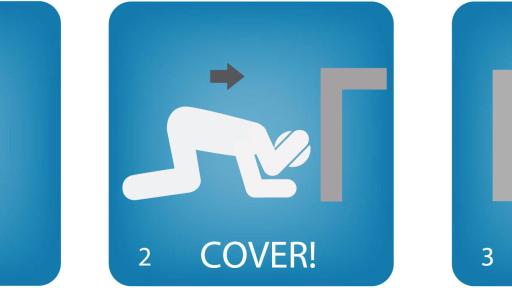 Created pro bono by Warner Bros. for the Ad Council, the new creative includes English language TV and radio advertising and uses scenes from the feature film San Andreas to amplify earthquake safety awareness and the protective actions that can be taken in the event of an earthquake. Featuring Dwayne Johnson, one of the stars of the film, the PSAs educate audiences on the three steps to take if an earthquake strikes; “Drop, Cover and Hold On.” The PSAs direct audiences to Ready.gov/Earthquake, where visitors can access more information on how to protect themselves, their families, and property before, during, and after an earthquake.

It is critically important to highlight the steps people can take to protect themselves from an earthquake. According to joint research by the U.S. Geological Service (USGS) and FEMA, nearly half the U.S. population, 150 million Americans, are exposed to potentially damaging earthquake shaking.

“Earthquakes can occur anywhere in the U.S. without warning,” said FEMA Administrator Craig Fugate. “The PSA provides earthquake safety tips that are vital to preparing yourself and your family to react quickly, which will save lives.”

The new PSAs are an extension of FEMA and the Ad Council’s Ready campaign, which has helped to generate more than 87 million unique visitors to the campaign’s website Ready.gov since its launch in 2003. Through the Ad Council, to date, the Ready campaign has received more than $1.1 billion in donated media.

“We are glad that Dwayne Johnson and Warner Bros. are helping to support the important earthquake preparedness messaging behind our Ready campaign,” said Lisa Sherman, president and CEO of the Ad Council. “It is through strategic partnerships such as this that we can reach the largest audience possible, and families can learn how to be prepared in the event of a disaster.”

The Ad Council is distributing the new PSAs to media outlets nationwide this week and the PSAs will run and air in advertising time and space donated by the media.

Federal Emergency Management Agency
FEMA’s mission is to support our citizens and first responders to ensure that as a nation we work together to build, sustain, and improve our capability to prepare for, protect against, respond to, recover from, and mitigate all hazards. Learn more at fema.gov

The Ad Council
The Ad Council is a private, non-profit organization with a rich history of marshaling volunteer talent from the advertising and media industries to deliver critical messages to the American public. Having produced literally thousands of PSA campaigns addressing the most pressing social issues of the day, the Ad Council has affected, and continues to affect, tremendous positive change by raising awareness, inspiring action and saving lives. To learn more about the Ad Council and its campaigns, visit www.adcouncil.org, like us on Facebook, follow us on Twitter or view our PSAs on YouTube.

About San Andreas
After the infamous San Andreas Fault finally gives, triggering a magnitude 9-plus earthquake in California, a search and rescue helicopter pilot (Dwayne Johnson) and his estranged wife make their way together from Los Angeles to San Francisco to save their only daughter. But their treacherous journey north is only the beginning, and when they think the worst may be over…it’s just getting started.