PR Newswire, Bethesda, MD (Dec. 14, 2015)
Irritable bowel syndrome (IBS) significantly impacts patients’ daily lives; a new survey found symptoms can be so bothersome that many people would give up caffeine, their cell phone or internet access, or even sex for one month for the chance to obtain a month’s relief from IBS symptoms. Today, the American Gastroenterological Association (AGA) released results from the “IBS in America” survey, the most comprehensive IBS survey ever conducted of patients and physicians, which looks at the physical, emotional and social impacts of this condition. 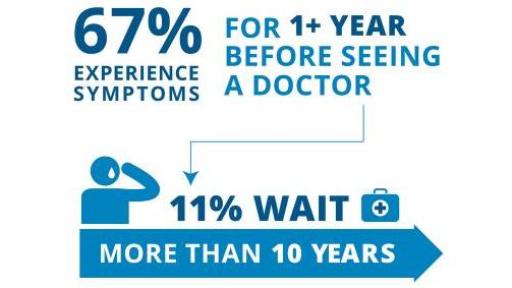 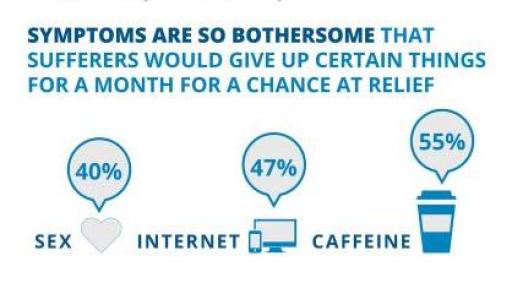 From Self-Help to Communication 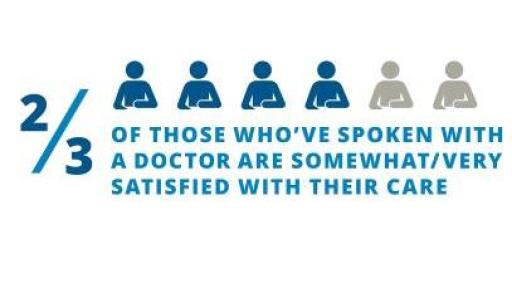 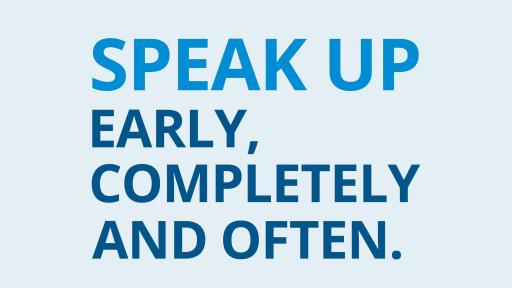 IBS is estimated to impact nearly 35 million Americans and causes recurring abdominal pain and constipation or diarrhea. Critical insights from the “IBS in America” survey, which polled more than 3,200 IBS sufferers and 300 health-care providers, include:

“IBS is an important health-care priority — it is the seventh most common diagnosis made by all physicians and the most common diagnosis made by gastroenterologists. People who suffer from abdominal pain and bowel symptoms are not alone,” said Michael Camilleri, MD, AGAF, president of AGA. “Talking about bowel function habits is never easy, but it is concerning to see how long the respondents in this survey often waited to talk to a doctor. There may not be a cure for IBS, but there are treatments. Patients need to see a doctor, and doctors need to be proactive in bringing up this topic in conversation with the patient.”

Anthony Lembo, MD, Harvard Medical School and Beth Israel Deaconess Medical Center, Boston, and a co-author of the survey, stated, “The ‘IBS in America’ survey gives voice to the experience of people suffering from this condition in a way I have never seen before. Understanding what people would be willing to give up for one month — including sex or caffeine — in exchange for one month free of IBS symptoms is a powerful illustration of just how much they are suffering.”

Andrea Shin, MD, practicing gastroenterologist and assistant research professor, Indiana University, and a co-author of the survey, added, “The finding I was most surprised by in this survey is how often sufferers take advice from families and friends given that IBS affects everyone differently — what worked for one person may not work in another, so it’s critical that patients work with a doctor to manage their own disease.”

With this feedback, doctors are more likely to be able to help their patients navigate their own IBS treatment path.

The full survey results are available at IBSinAmerica.gastro.org and Dr. Shin will participate in a webcast on Thursday, Dec. 17 from 1p.m. to 2p.m. ET, moderated by Kara Gross Margolis, MD, Columbia University, during which the results will be discussed. Register here. Follow and join in the discussion with the hashtag #IBSinAmerica.

About IBS
A chronic condition, IBS consists of a constellation of gastrointestinal (GI) symptoms, such as abdominal pain, constipation, diarrhea, gassiness, bloating or cramping. Some people experience IBS with constipation (IBS-C), which is characterized by abdominal pain and difficult or infrequent bowel movements, while others experience IBS with diarrhea (IBS-D), characterized by frequent loose stools or an urgent need to move the bowels. Others alternate between constipation and diarrhea. While IBS cannot be cured, symptoms can be managed. Treatment strategies are based on the nature and severity of symptoms, as well as identification of the disturbance of function, and may include diet or lifestyle modifications, over-the-counter products or prescription medicines.

About the Survey
The “IBS in America” survey was commissioned by the American Gastroenterological Association and conducted with the financial support of Ironwood Pharmaceuticals, Inc. and Allergan plc. Online surveys were conducted by GfK, a leading market research company, Sept. 14 through Oct. 29, 2015. In total 3,254 IBS sufferers, both diagnosed and undiagnosed, were interviewed, as well as 302 physicians who treat IBS patients — 151 primary care physicians and 151 gastroenterologists.

About the American Gastroenterological Association (AGA)
The American Gastroenterological Association is the trusted voice of the GI community. Founded in 1897, the AGA has grown to include more than 16,000 members from around the globe who are involved in all aspects of the science, practice and advancement of gastroenterology. The AGA Institute administers the practice, research and educational programs of the organization. www.gastro.org.