MEN NEED TO MAN UP, ACCORDING TO BALL PARK® BRAND SURVEY

PR Newswire, CHICAGO, Ill. (October 14, 2015)
Hey tough guys. Ball Park® brand (www.ballparkbrand.com) says it is time to try a little tenderness. The brand known for making great tasting guy food is lighting a fire with the launch of its new Ball Park Flame Grilled Jerky, a jerky that’s dried to be tough and flame grilled to be tender. To introduce the new product, Ball Park brand commissioned a survey to uncover some of the tough situations guys face. And with the help of ultimate tough guy Tommy “Tiny” Lister, a centerpiece of the new Ball Park Flame Grilled Jerky campaign, the brand is inviting guys to tweet their tough challenges to receive a witty yet tender solution from Tiny himself.

Tommy “Tiny” Lister is a character actor and retired professional wrestler who has appeared in a variety of blockbuster films.

“We know consumers think jerky can be too tough,” said Timothy Smith, vice president of marketing for jerky, Ball Park brand. “But jerky isn’t the only tough thing in life that needs a little tenderness, so we’re stepping up with tender solutions to some of life’s tough conversations.”

According to the Ball Park brand survey, eight out of ten men admit to putting off tough talks; 50 percent of them say they delay the dialogue for a month or more; 36 percent have even faked being busy or sick to avoid a conversation. It’s clear guys need help. In fact, over one in five men would rather clog a toilet in someone else’s home than have a tough conversation. The top five tough conversations guys identified are:

The survey also revealed nearly one in three men would avoid breaking up with a romantic partner in person in favor of a text or Facebook message. And 20 percent of men admit to staying in a relationship they want to end just to avoid the break-up conversation. 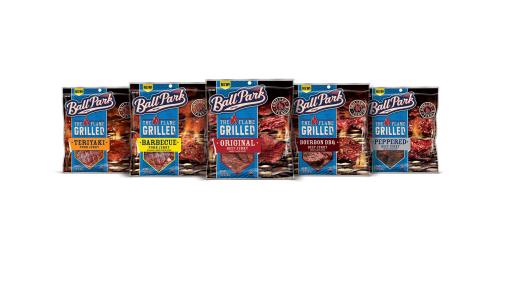 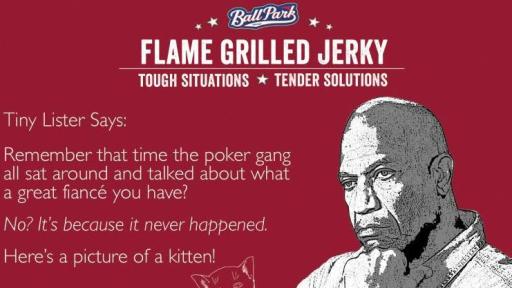 MEN NEED TO MAN UP, ACCORDING TO BALL PARK® BRAND SURVEY Tweet

The new spot shows tough guy Lister observing a co-worker struggling to get a water bottle from a vending machine when his tender side kicks in. After biting into his Ball Park Flame Grilled Jerky, Lister shakes the vending machine to release the water bottle and then delivers it to his co-worker’s desk.

For more information on Ball Park Flame Grilled Jerky and the entire Ball Park brand product portfolio, visit www.ballparkbrand.com or check out the brand on Facebook and Twitter.

About Ball Park Brand
The Ball Park brand was launched in 1957 in response to a request from the owner of the Detroit Tigers baseball team. The Ball Park frank was such a success, it was expanded nationally. Today, Ball Park products can be found in supermarkets, convenience stores and a variety of sports venues - including Detroit’s Comerica Park. For more information, visit www.ballparkbrand.com.

The Ball Park Survey was conducted through Kelton Global between September 24th and October 2nd, 2015 among 1,012 nationally representative American men 18+, using an e-mail invitation and an online survey. Quotas are set to ensure a reliable representation of the U.S. male population 18 and over. Results of any sample are subject to sampling variation. The magnitude of the variation is measurable and is affected by the number of interviews and the level of the percentages expressing the results. In this particular study, the chances are 95 in 100 that a survey result does not vary, plus or minus, by more than 3.1 percentage points from the result that would be obtained if interviews had been conducted with all personas in the universe represented by the sample. The margin of error for any subgroup will be slightly higher.