FIRST TOYOTA MIRAI OWNERS GET A JUMP ON THE FUTURE

PR Newswire – TORRANCE, Calif. (Oct. 21, 2015)
Movie magic sometimes turns into technological reality. Last night more than 300 new Toyota Mirai owners, Mirai dealers and special guests watched actors Michael J. Fox and Christopher Lloyd bring a famous trash-into-fuel scene from “Back to the Future Part II” into the present. The occasion: a celebration to mark the U.S. arrival of Toyota’s Mirai hydrogen fuel cell vehicle — a modern, real-life version of Doc Brown’s trash-fueled technology. The “Fueled by the Future” video debuted at the event is the last in the “Fueled By Everything” online video series demonstrating hydrogen fuel’s potential to be sourced from almost anything, including solar, wind and trash.

Today marked the official on-sale date of the Mirai, the same date that was “the future” in the storied Universal franchise. More than 2,000 people so far have requested to buy a Mirai in California, where it is first available. The party celebrated those trailblazers with food, décor and conversation inspired by the “Back to the Future” vision of 2015. New owners representing each of the dealership locations in Southern and Northern California received ceremonial keys. They will be behind the wheel soon. 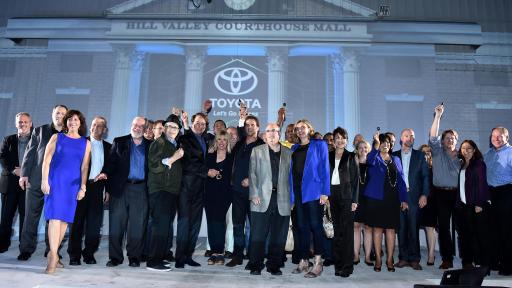 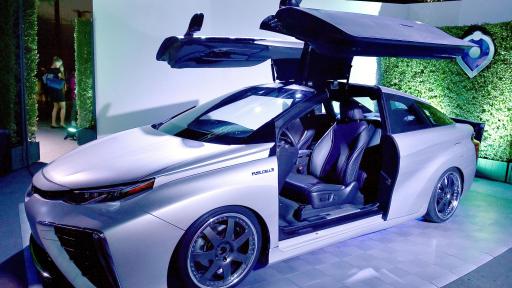 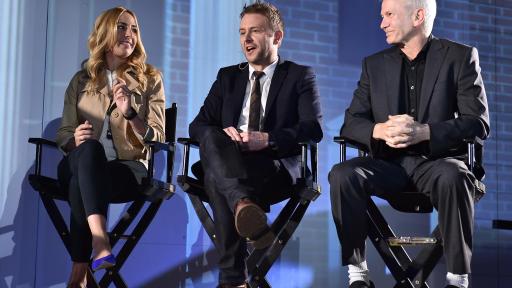 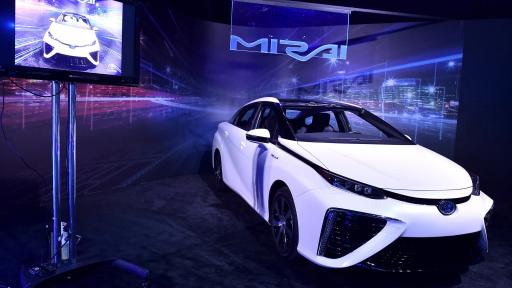 “A piece of the future is now a reality with the Toyota Mirai,” Lloyd said. “Compared to some other technologies predicted in the film, like rehydrated pizza or self-tying shoes, this technology has the real potential to change the world.”

“Back to the Future” films will be in theaters on October 21 only and also available in a new Blu-Ray and DVD box set. While drivers can’t exactly throw soda cans and banana peels into the Mirai fuel tank and expect to cruise the roads of California, organic waste can decompose and produce biogas at landfills. This gas can be purified into and converted into hydrogen for fuel. The only emission from the Mirai’s tailpipe is water.

At the Mirai premiere event, attendees got to put this technology in context with a discussion led by CNET Editor-at-Large Brian Cooley with participants Nerdist CEO and host of @midnight Chris Hardwick, Jackie Birdsall, Mirai engineer, and Edward Eyth, the creative designer responsible for many of the “Back to the Future II” concepts. Celebrity chef Richard Blais set the tone with a custom cocktail inspired by the future.

“This moment celebrated the intersection between the U.S. arrival of the Mirai and the 30th anniversary of an iconic film,” said Bill Fay, Toyota division group vice president and general manager. “We were thrilled to mark the occasion with a video featuring the film’s original stars Michael J. Fox and Christopher Lloyd, reminding our first Mirai owners that they will be driving a future we could only dream of 30 years ago.”

Also on-hand at the event were two exclusive “Back to the Future”-inspired vehicles. The first re-imagined Doc Brown’s time machine as a customized Mirai, complete with gullwing doors and a heads-up display of the time-traveling destination. The second was a re-creation of Marty McFly’s dream truck using the all-new 2016 Toyota Tacoma that went on sale in September. The tricked out truck is a fan-favorite in the “Back to the Future” trilogy and a natural movie connection for Toyota. Fans in Los Angeles, New York and Dallas today can see that truck in major tourist destinations.

Toyota’s “Fueled by Everything” campaign was created with creative agency partner Droga5, while the “Back to the Future” Tacoma elements drew on the expertise of Saatchi & Saatchi Los Angeles.

ABOUT THE BACK TO THE FUTURE 30TH ANNIVERSARY TRILOGY
Experience the future all over again with the Back to the Future 30th Anniversary Trilogy on Blu-ray & DVD! Join Marty McFly (Michael J. Fox), Doc Brown (Christopher Lloyd) and a time traveling DeLorean for the adventure of a lifetime as they travel to the past, present and future, setting off a time-shattering chain reaction that disrupts the space-time continuum! From filmmakers Steven Spielberg, Robert Zemeckis and Bob Gale, this timeless collection includes a new bonus disc with over two hours of extra features such as “Doc Brown Saves the World!”, an all-new original short starring Christopher Lloyd. Hashtag: #BTTF2015 Facebook: https: www.facebook.com/BTTF Website: www.BackToTheFuture.com

Toyota (NYSE:TM), the world's top automaker and creator of the Prius, is committed to building vehicles for the way people live through our Toyota, Lexus and Scion brands. Over the past 50 years, we’ve built more than 25 million cars and trucks in North America, where we operate 14 manufacturing plants and directly employ more than 40,000 people. Our 1,800 North American dealerships sold more than 2.5 million cars and trucks in 2013 – and about 80 percent of all Toyota vehicles sold over the past 20 years are still on the road today.

Toyota partners with philanthropic organizations across the country, with a focus on education, safety and the environment. As part of this commitment, we share the company’s extensive know-how garnered from building great cars and trucks to help community organizations and other nonprofits expand their ability to do good. For more information about Toyota, visit www.toyotanewsroom.com.