View Your Vehicle's History with VinCheckSM 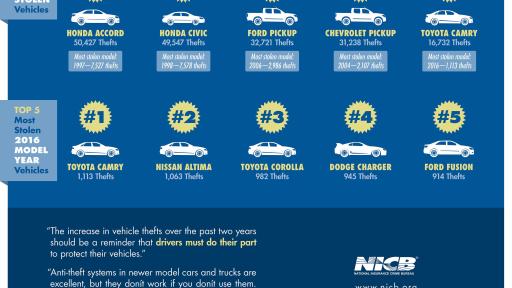 Included with today’s release is a list of the top 25 2016 vehicle makes and models that were reported stolen in calendar year 2016.

While Honda Accords and Civics dominate this annual list, they are older, pre-“smart key” production models. Since the introduction of smart keys and other anti-theft technology, Honda thefts have fallen precipitously. As the list of top 25 most stolen 2016 model year vehicles shows, there were only 493 thefts of Accords last year.

Technology is working, but complacency can defeat it. While thefts are down dramatically since their all-time high in 1992, thousands of vehicles continue to be stolen each year because owners leave their keys or fobs in the vehicles and that invites theft.

For 2016, the most stolen vehicles* in the nation were:

The following are the top 10 2016 model year vehicles stolen during calendar year 2016:

“The increase in vehicle thefts over the past two years should be a reminder that drivers must do their part to protect their vehicles,” said NICB President and CEO Joe Wehrle. “Anti-theft systems in newer model cars and trucks are excellent, but they don’t work if you don’t use them. Far too many thefts occur because the vehicle is left unlocked and the key or fob is inside. Taking the time to lock it up every time you leave it can save a whole lot of headache and expense in the long run.”

Vehicle theft is a severe economic hardship for its victims—especially if a vehicle is uninsured. That is why NICB continues to advise all drivers to review our four “Layers of Protection”:

Is your car on @insurancecrime’s Hot Wheels report for most stolen vehicle in 2016?  Tweet

Considering a used vehicle purchase? Check out VINCheckSM, a free vehicle history service for consumers. Since 2005, NICB has offered this limited service made possible by its participating member companies. Check it out at: www.nicb.org/vincheck.

*This report reflects stolen vehicle data contained in NCIC and present in the “NCIC mirror image” when accessed by NICB on March 23, 2017. NCIC records may contain errors based on inaccurate entries submitted by reporting agencies. Full size pickups include half ton and larger capacity models for all makes.

About the National Insurance Crime Bureau: Headquartered in Des Plaines, Ill., the NICB is the nation's leading not-for-profit organization exclusively dedicated to preventing, detecting and defeating insurance fraud and vehicle theft through data analytics, investigations, training, legislative advocacy and public awareness. The NICB is supported by more than 1,100 property and casualty insurance companies and self-insured organizations. NICB member companies wrote over $436 billion in insurance premiums in 2016, or more than 79 percent of the nation's property/casualty insurance. That includes more than 94 percent ($202 billion) of the nation's personal auto insurance. To learn more visit www.nicb.org. 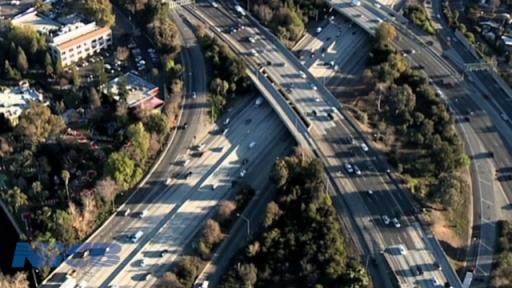