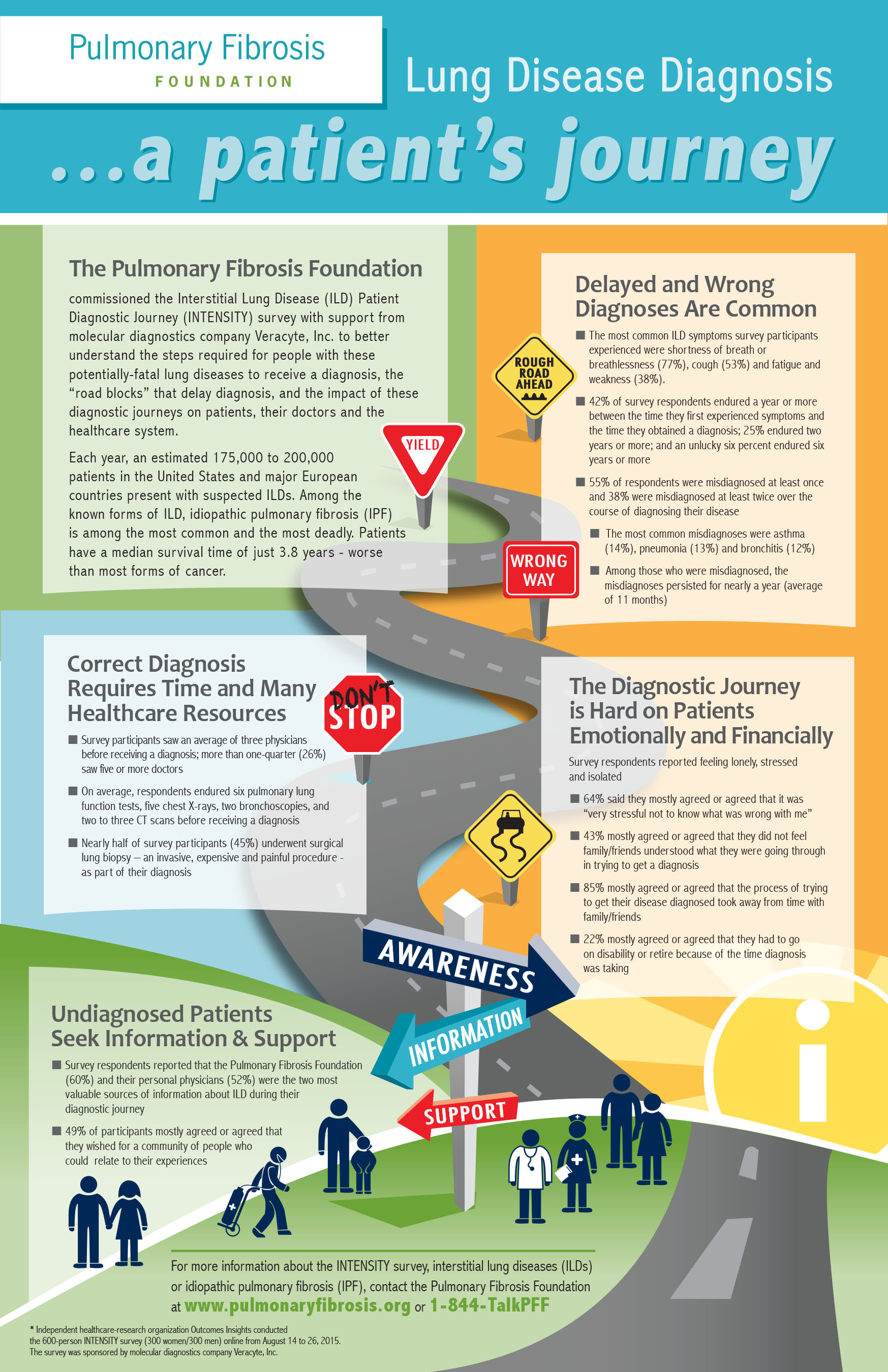 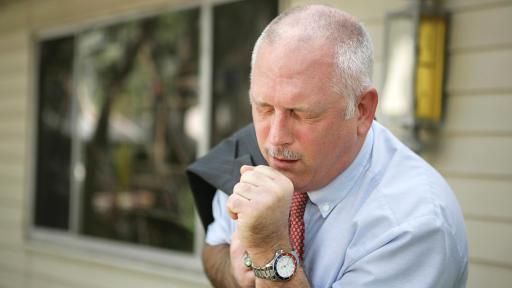 - 47 percent of participants in Pulmonary Fibrosis Foundation survey had idiopathic pulmonary fibrosis (IPF) – a disease with a median survival time of just 3.8 years -

- PFF issues call to action for greater awareness of IPF and its symptoms, and improved diagnosis to improve care, reduce patient distress -

An estimated 175,000 to 200,000 patients in the United States and major European countries present with suspected ILDs each year.1 Among the known forms of ILD, IPF is among the most common and the most deadly. There are no known cures for IPF and patients have a median survival time of just 3.8 years2 - worse than most forms of cancer.3 In October 2014, the US Food and Drug Administration approved the first two drugs demonstrated to slow IPF disease progression among some patients - increasing the importance of accurate and timely diagnosis for all patients with suspected IPF.

The INTENSITY survey assessed the steps and time required for adults living with ILD to receive an accurate diagnosis, specific obstacles hindering timely diagnosis, and the physical and emotional impact of patients’ diagnostic journeys. Key findings demonstrate diagnostic delays and misdiagnoses, including:

“The diagnostic delays and misdiagnoses that patients experience are particularly troubling given that we now have effective treatments for both fibrotic and inflammatory forms of ILD,” said David Lederer, MD, MS, PFF senior medical advisor on education and awareness. “The results of the INTENSITY survey clearly signal the need for a change in primary care-provider education.”

Among survey participants, 47 percent of whom reported having IPF, an accurate diagnosis typically required the involvement of three physicians and multiple diagnostic tests, including (for many) invasive diagnostic procedures. This diagnostic odyssey is time-consuming and can be clinically risky.

“IPF is a complicated disease to diagnose because its signs and symptoms mimic a wide range of common medical conditions, and it requires many resources and different specialties,” Lederer said. “These survey results are a wake-up call. We need to raise awareness of the disease and its symptoms, and improve diagnoses to help patients avoid the anxiety, uncertainty, and cost - as well as the potential clinical implications – associated with a protracted diagnostic journey and the invasive diagnostic procedures involved.”

Finally, the survey revealed that the diagnostic process takes a huge emotional toll on ILD patients, who feel lonely, isolated and frustrated by the obstacles they encounter. The process can also be financially impactful for them.

“Patients and providers both face challenges during the evaluation of suspected ILD,” Lederer said. “These survey data give us a starting point. Now our job is to work to improve our patients’ quality of life and clinical outcomes in the coming years.”

About the INTENSITY Survey
Independent healthcare-research organization Outcomes Insights conducted the INTENSITY survey from August 14-26, 2015, using a quantitative online questionnaire. The survey involved 600 ILD patients (300 men/300 women), including 279 (47 percent) with idiopathic pulmonary fibrosis (IPF). The survey was recruited without gender quotas and the even distribution of men and women was coincidental. The median participant age was 63 years for women and 69 years for men and most participants had been diagnosed within the past two to five years. Respondents were screened to ensure they were United States residents and had been diagnosed by a physician with an interstitial lung disease (ILD).

About the Pulmonary Fibrosis Foundation
The mission of the Pulmonary Fibrosis Foundation (PFF) is to serve as the trusted resource for the pulmonary fibrosis (PF) community by raising awareness, providing disease education, advancing care and funding research. The PFF collaborates with physicians, organizations, people with PF and caregivers worldwide. The Pulmonary Fibrosis Foundation has a four-star rating from Charity Navigator and is a Better Business Bureau accredited charity. The PFF Summit 2015: From Bench to Bedside, its third biennial international health care conference, is being held November 12-14, 2015 in Washington, D.C. For more information visit www.pulmonaryfibrosis.org or call 844.TalkPFF (844.825.5733) or +1.312.587.9272 from outside of the United States.

About Idiopathic Pulmonary Fibrosis
Idiopathic pulmonary fibrosis (IPF) is a condition in which, over a period of time, lung tissue becomes thickened, stiff and scarred. The development of the scar tissue is called fibrosis. As the lung tissue becomes scarred and grows thicker, the lungs lose their ability to transfer oxygen into the bloodstream. As a result, the brain and other organs don’t receive enough oxygen. In some cases, doctors can determine the cause of the fibrosis, but in many cases, there is no known cause. When the cause of the fibrosis is unknown (and certain pathologic or radiographic criteria are met), the disease is called idiopathic pulmonary fibrosis or IPF. There is no cure for IPF. Presently, there are two FDA-approved treatments for IPF in the U.S.

About Veracyte
Veracyte (NASDAQ: VCYT) is pioneering the field of molecular cytology, offering genomic solutions that resolve diagnostic ambiguity and enable physicians to make more informed treatment decisions at an early stage in patient care. By improving preoperative diagnostic accuracy, the company aims to help patients avoid unnecessary invasive procedures while reducing healthcare costs. Veracyte's Afirma® Thyroid FNA Analysis centers on the proprietary Afirma Gene Expression Classifier (GEC) and is becoming a new standard of care in thyroid nodule assessment. The Afirma test is recommended in leading practice guidelines and is covered for approximately 150 million lives in the United States, including through Medicare and many commercial insurance plans. Veracyte is expanding its molecular cytology franchise to other clinical areas, beginning with difficult-to-diagnose lung diseases. In April 2015, the company launched the Percepta™ Bronchial Genomic Classifier, a test to evaluate patients with lung nodules that are suspicious for cancer. Veracyte is developing a second product in pulmonology, targeting interstitial lung diseases, including idiopathic pulmonary fibrosis. For more information, please visit www.veracyte.com.