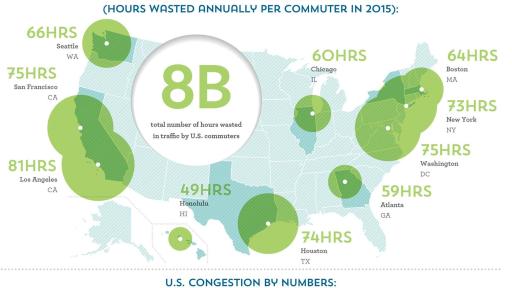 PR Newswire, Kirkland, WA—March 15, 2016
INRIX®, Inc., a global leader for transportation analytics, today released its 2015 Traffic Scorecard, a benchmark for governments and agencies in the U.S. and Europe to measure progress in improving urban mobility.

The report reveals the U.S. faces large challenges to solve congestion issues, fueled by continued economic and population growth, higher employment rates and declining gas prices. Cities that have experienced the most economic improvement during the past year are at highest risk for consequences related to worsened traffic conditions, including reduced productivity, higher emissions and increased stress levels. For example, Washington D.C., San Francisco, New York, Seattle and Boston all saw reduced unemployment rates bringing them below the national average of 5.3 percent for 2015.1 However, according to the INRIX Traffic Scorecard, congestion in those cities alone combined to waste 1.5 billion hours for daily car commuters last year. Nationwide, commuters spent a total of more than eight billion extra hours stuck in traffic, representing almost 50 hours per driver.

City by city, here’s how the top 10 cities in the U.S. with the worst traffic rank in terms of average time wasted per commuter:

Although cities have invested in multimodal options, including public transportation, pedestrian programs and bicycle lanes, a strong economy often results in more drivers on the road. For most cities, applying big data to create intelligent transportation systems will be key to solving urban mobility. INRIX’s traffic analytics can help city planners and engineers make data-based decisions to prioritize spending where it will create the biggest impact now and for the future. When working with limited budgets to manage transportation systems, using data-based performance metrics can make a major difference in the outcomes of planning and implementing new infrastructure.

Fueling the transformation toward data-driven city planning is the U.S. DOT's $50 million Smart City Challenge. Last week at South by Southwest® in Austin, seven finalist cities were awarded $100,000 to refine their proposals before the winner is chosen in June. As this effort by the federal government seeks to stimulate investment in smart cities, measurement and analytics will be critical to determine which solutions are most effective, optimize ROI for taxpayers and ultimately evaluate progress.

“INRIX partners with more than 200 governments and agencies worldwide, providing them with the industry’s most accurate mobility data and analytics to tackle transportation challenges and enhance intelligent movement,” said Bryan Mistele, President and CEO, INRIX. “The 2015 Traffic Scorecard is our response to their need for a quantifiable benchmark to track the impact of their spending on smart city initiatives. We’re excited to be a partner to many of the cities that have submitted proposals to the U.S. DOT’s Smart City Challenge to help them create a better future for drivers, pedestrians, cyclists and businesses.”

How the U.S. Compares to Cities Worldwide
At a city level, the U.S. accounts for 50 percent of the top 10 metros with the worst traffic congestion across the U.S. and Europe. London tops the list of gridlock-plagued cities, with 101 hours of delay per commuter, followed by Los Angeles (81 hours), Washington D.C. (75 hours), San Francisco (75 hours), Houston (74 hours), New York (73 hours), Stuttgart (73 hours), Antwerp (71 hours), Cologne (71 hours) and Brussels (70 hours).

Drivers on the top 10 worst roads globally waste on average 110 hours a year, or more than four and a half days, in gridlock. Of these corridors, four are in Los Angeles and three are in Moscow, followed by roads in London, Brussels and Munich.

Of the countries measured by the INRIX Traffic Scorecard, the U.S. leads the list of countries with the most hours wasted in traffic – an average of nearly 50 hours per commuter in 2015 – outranking Belgium (44 hours), Netherlands (39 hours), Germany (38 hours), Luxembourg (33 hours), Switzerland (30 hours), U.K. (30 hours) and France (28 hours).

Methodology
Findings in the INRIX 2015 Traffic Scorecard are drawn from traffic speed data collected by INRIX on more than 1.3 million miles of urban streets and highways in the U.S., along with highway performance data from the Federal Highway Administration. To view the full report, including an analysis of the most congested corridors in the U.S. and Europe, visit inrix.com/scorecard.

About INRIX
INRIX is the global leader in connected car services and intelligent movement, a new approach that leverages big data and the cloud to help manage urban mobility. By aggregating a variety of sources and applying intelligence, INRIX delivers comprehensive data and solutions to help move people, cities and businesses forward.

Our partners are automakers, governments, mobile operators, developers, advertisers, as well as enterprises large and small. We are literally everywhere with over 450 customers across 60 countries. INRIX has offices in Kirkland, Seattle, Santa Monica, London, Manchester and Munich.