SKILLMAN, N.J., August 25, 2016 / PR Newswire /
What will the year 2040 look like? While we can’t imagine the technological advances or geopolitical developments that lie ahead, a new study from anti-aging pioneer RoC® Skincare offers a preview of what you can expect to see when looking in the mirror several decades down the road. And one thing is clear for residents of top U.S. metropolitan areas: the decisions made today can and will impact your skin health in the future. 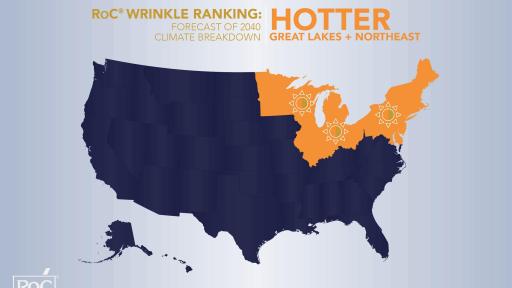 A Wrinkled State of the Union: RoC® Wrinkle Ranking 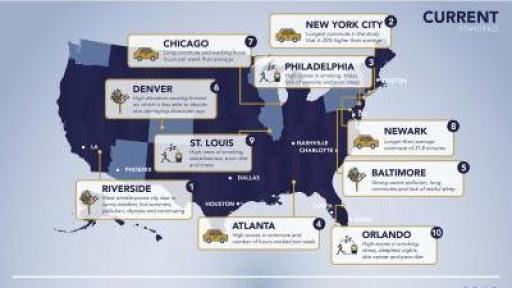 A Wrinkle in Time: U.S. Urbanization 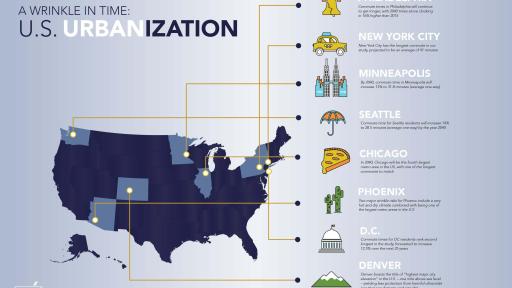 To shine a light on how these factors affect skin aging, RoC® Skincare has again partnered with independent research firm Sperling’s Best Places for the 2016 RoC® Wrinkle Ranking: a city by city look at the metropolitan areas’ risk for skin damage and premature aging by the year 2040. The analysis is based on factors commonly known to affect skin health – lifestyle, occupational and environmental influences.

The third annual RoC® Wrinkle Ranking predicts that in the year 2040, Philadelphia will reign as the most wrinkle-prone city in America, thanks to high stress levels, more airborne pollution, lengthy commute times and higher than average smoking rates. On the other end of the spectrum, San Jose will claim the least wrinkle-prone title in 2040, due to its shorter commute time, smaller population size and anticipated shift toward a wetter climate. Following is the full ranking:

2040 Forecast: Most to Least Wrinkle-Prone Cities in America

“Our skin is a canvas that reveals a lifetime of environmental influences, behavioral choices and genetics,” said architect and urban futurist Dr. Cindy Frewen. “While our lifestyle choices are reflected in our faces, there’s no need to necessarily relocate just yet – there are variables studied in the Wrinkle Ranking that are within your control - from smoking and commuting to protecting your skin with sunscreen, serums and moisturizers.”

Consumers can reference the RoC® Wrinkle Ranking to understand what decisions might cause their skin to age in the future and can learn more about practices and products that help reduce the appearance of fine lines and wrinkles at RoCSkincare.com.

About the RoC® Skincare Wrinkle Ranking:
To determine the metropolitan areas where residents’ skin are most at risk from damage by their lifestyle and environment in the year 2040, RoC® Skincare and Sperling’s Best Places performed a meta-analysis, which combines the findings of original research with existing related research in the field of the study. All data was adjusted by the current population to arrive at “per capita” figures, providing an accurate comparison between cities of varying sizes. Each metropolitan area in the study received points for each of the criteria based on their relation to the other metropolitan areas’ scores in that data category, and category scores were weighted and aggregated to determine an overall “Wrinkle Index” score to rank the top U.S. metro areas.

About RoC® Skincare:
RoC® Skincare has been a leading French skincare brand for more than 50 years, committed to developing anti-aging formulas for beauty that lasts. RoC believes it’s the power of methods, not the promise of miracles, that help skin look and feel its best at every age. Considered a pioneer in the world of anti-aging, RoC was the first to discover the method of stabilizing retinol, making it available for safe and effective daily use. And over the past 25 years, RoC has continued to improve its aesthetics, tolerance and efficacy, partnering with a team of world-class dermatologists to develop new products that meet the needs of skin concerns everywhere.

About Sperling’s Best Places:
Bert Sperling has been helping people find their own “Best Place” to live, work and retire for nearly 30 years. His research firm, Sperling's Best Places, puts facts in the hands of the public so they can make better decisions about best places to live, work, retire, play, or relocate. He has authored bestselling books rating and ranking places, and his website www.bestplaces.net helps over a million visitors each month.

Tweet
RoC Skincare Predicts The Most Wrinkle-Prone Cities In America