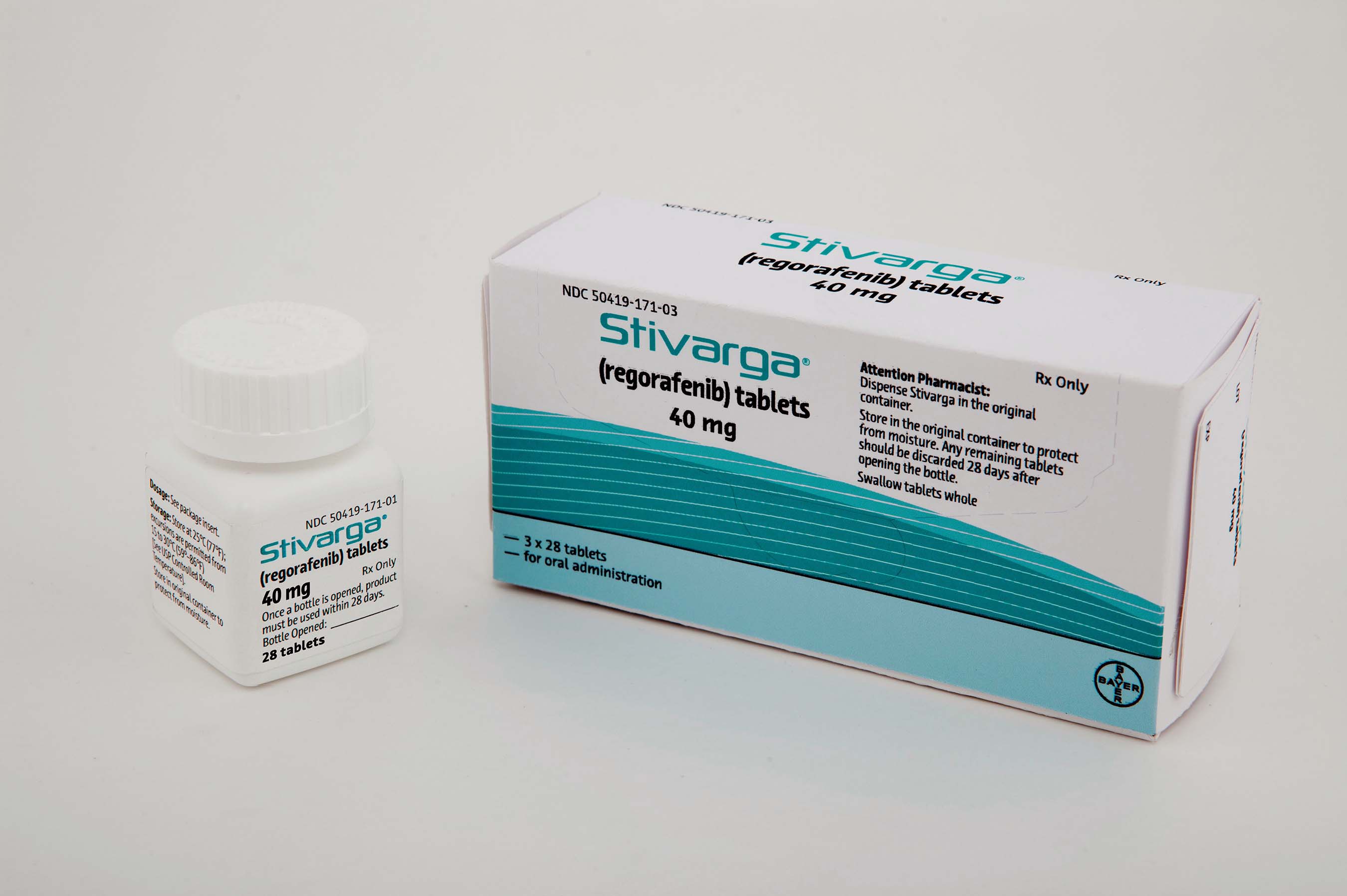 Whippany, N.J., April 27, 2017 – Bayer announced today that the U.S. Food and Drug Administration (FDA) approved Stivarga® (regorafenib) tablets for the second-line treatment of patients with hepatocellular carcinoma (HCC) who have been previously treated with Nexavar® (sorafenib).2 Stivarga is the first and only treatment to demonstrate significant improvement in overall survival in second-line HCC patients.2 In the RESORCE trial, Stivarga was shown to provide a statistically significant and clinically meaningful improvement in overall survival (OS) versus placebo; the median OS was 10.6 [(n=379) (CI 9.1, 12.1)] vs 7.8 [(n=194) (CI 6.3, 8.8)] months, respectively (HR 0.63, 95% CI 0.50-0.79; p<0.0001).2 This translates to a 37% reduction in the risk of death. The number of deaths in each arm included 233 of 379 (62%) with Stivarga and 140 of 194 (72%) with placebo.2  Today’s FDA approval expands Bayer’s leadership in liver cancer with a treatment plan in HCC involving use of Stivarga directly after progression on Nexavar.2

Stivarga is an oral inhibitor of multiple kinases involved in normal cellular functioning and in pathological processes such as oncogenesis, tumor angiogenesis, metastasis and tumor immunity.2 The FDA’s approval is based on data from the international, multicenter, placebo-controlled Phase III RESORCE [REgorafenib after SORafenib in patients with hepatoCEllular carcinoma; NCT 01774344] trial, which investigated patients with HCC whose disease had progressed during treatment with Nexavar.2  The most frequently observed adverse drug reactions (≥30%) in STIVARGA-treated patients vs placebo-treated patients in HCC, respectively, were: pain (55% vs 44%), HFSR/PPE (51% vs 7%), asthenia/fatigue (42% vs 33%), diarrhea (41% vs 15%), hypertension (31% vs 6%), infection (31% vs 18%), decreased appetite and food intake (31% vs 15%).2

“Bayer is proud to have played a significant role in the treatment of hepatocellular carcinoma,” said Robert LaCaze, executive vice president and head of the Oncology Strategic Business Unit at Bayer. “We first embarked on our scientific research in this area 20 years ago and we have remained steadfast in our mission to deliver new treatment options to these patients. We could not have done it alone: we would like to thank the patients, caregivers and investigators for their participation and engagement in the study.”

Thomas F. Nealon III, national board chair and chief executive officer of the American Liver Foundation, commented, “Given that the incidence of liver cancer continues to rise,3 we applaud the efforts of Bayer and the RESORCE study investigators for ushering in this much-needed treatment option for patients with liver cancer.”

The approval of Stivarga in liver cancer marks the third time that this therapy has been granted FDA approval on a priority basis. The FDA granted Fast Track designation to Stivarga in this indication, which is an expedited program designed to facilitate development and review of drugs to address unmet medical need in the treatment of a serious or life-threatening condition. The FDA also granted Orphan Drug Designation (ODD) to Stivarga in HCC. The ODD program provides orphan status to drugs and biologics which are defined as those intended for the safe and effective treatment, diagnosis or prevention of rare diseases and disorders.

Additional regulatory filings for Stivarga in HCC are under review in countries around the world, including the EU, Japan and China. Decisions in the EU and Japan are expected later in this year.

Regorafenib is a compound developed by Bayer. In 2011, Bayer entered into an agreement with Onyx, now an Amgen subsidiary, under which Onyx receives a royalty on all global net sales of regorafenib in oncology.

Infections: STIVARGA caused an increased risk of infections. The overall incidence of infection (Grades 1-5) was higher (32% vs 17%) in 1142 STIVARGA-treated patients as compared to the control arm in randomized placebo-controlled trials. The incidence of grade 3 or greater infections in STIVARGA treated patients was 9%. The most common infections were urinary tract infections (5.7%), nasopharyngitis (4.0%), mucocutaneous and systemic fungal infections (3.3%) and pneumonia (2.6%). Fatal outcomes caused by infection occurred more often in patients treated with STIVARGA (1.0%) as compared to patients receiving placebo (0.3%); the most common fatal infections were respiratory (0.6% vs 0.2%). Withhold STIVARGA for Grade 3 or 4 infections, or worsening infection of any grade. Resume STIVARGA at the same dose following resolution of infection.

Dermatological Toxicity: In randomized, placebo-controlled trials, adverse skin reactions occurred in 71.9% of patients with STIVARGA arm and 25.5% of patients in the placebo arm including hand-foot skin reaction (HFSR) also known as palmar-plantar erythrodysesthesia syndrome (PPES) and severe rash, requiring dose modification. In the randomized, placebo-controlled trials, the overall incidence of HFSR was higher in 1142 STIVARGA-treated patients (53% vs 8%) than in the placebo-treated patients. Most cases of HFSR in STIVARGA-treated patients appeared during the first cycle of treatment. The incidences of Grade 3 HFSR (16% vs <1%), Grade 3 rash (3% vs <1%), serious adverse reactions of erythema multiforme (<0.1% vs 0%), and Stevens-Johnson syndrome (<0.1% vs 0%) were higher in STIVARGA-treated patients. Across all trials, a higher incidence of HFSR was observed in Asian patients treated with STIVARGA (all grades: 72%; Grade 3:18%). Toxic epidermal necrolysis occurred in 0.02% of 4518 STIVARGA-treated patients across all clinical trials of STIVARGA administered as a single agent. Withhold STIVARGA, reduce the dose, or permanently discontinue depending on the severity and persistence of dermatologic toxicity.

Hypertension: Hypertensive crisis occurred in 0.2% in STIVARGA-treated patients and in none of the patients in placebo arm across all randomized, placebo-controlled trials. STIVARGA caused an increased incidence of hypertension (30% vs 8% in mCRC, 59% vs 27% in GIST, and 31% vs 6% in HCC). The onset of hypertension occurred during the first cycle of treatment in most patients who developed hypertension (67% in randomized, placebo controlled trials). Do not initiate STIVARGA until blood pressure is adequately controlled. Monitor blood pressure weekly for the first 6 weeks of treatment and then every cycle, or more frequently, as clinically indicated. Temporarily or permanently withhold STIVARGA for severe or uncontrolled hypertension.

Wound Healing Complications: Treatment with STIVARGA should be stopped at least 2 weeks prior to scheduled surgery. Resuming treatment after surgery should be based on clinical judgment of adequate wound healing. STIVARGA should be discontinued in patients with wound dehiscence.

Nursing Mothers: Because of the potential for serious adverse reactions in breastfed infants from STIVARGA, do not breastfeed during treatment with STIVARGA and for 2 weeks after the final dose.

About Oncology at Bayer
Bayer is committed to delivering science for a better life by advancing a portfolio of innovative treatments. Bayer is a global leader in the management and treatment of hepatocellular carcinoma. The oncology franchise at Bayer includes three oncology products and several other compounds in various stages of clinical development. Together, these products reflect the company’s approach to research, which prioritizes targets and pathways with the potential to impact the way that cancer is treated.

Bayer: Science For A Better Life
Bayer is a global enterprise with core competencies in the Life Science fields of health care and agriculture. Its products and services are designed to benefit people and improve their quality of life. At the same time, the Group aims to create value through innovation, growth and high earning power. Bayer is committed to the principles of sustainable development and to its social and ethical responsibilities as a corporate citizen. In fiscal 2016, the Group employed around 115,200 people and had sales of EUR 46.8 billion. Capital expenditures amounted to EUR 2.6 billion, R&D expenses to EUR 4.7 billion. These figures include those for the high-tech polymers business, which was floated on the stock market as an independent company named Covestro on October 6, 2015. For more information, go to www.bayer.us.

© 2017 Bayer
BAYER, the Bayer Cross, Stivarga and Nexavar are registered trademarks of Bayer.

Forward-Looking Statement
This news release may contain forward-looking statements based on current assumptions and forecasts made by Bayer Group or subgroup management. Various known and unknown risks, uncertainties and other factors could lead to material differences between the actual future results, financial situation, development or performance of the company and the estimates given here. These factors include those discussed in Bayer’s public reports which are available on the Bayer website at  www.bayer.com. The company assumes no liability whatsoever to update these forward-looking statements or to conform them to future events or developments.

Dr. Richard Finn on the Importance of Clinical Trials 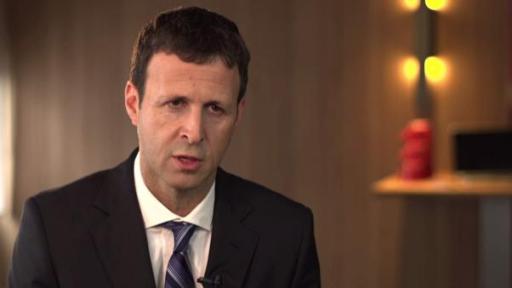 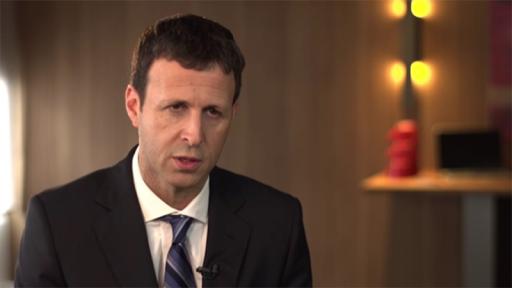