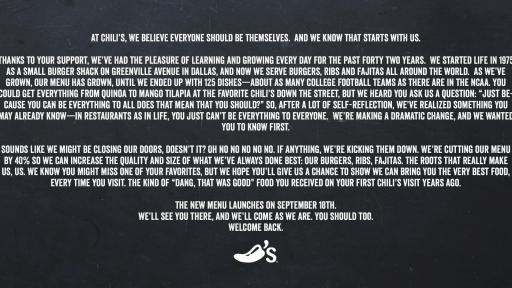 DALLAS, Sept. 8, 2017 — More than forty-two years ago, Chili’s® Grill & Bar changed the food industry and helped introduce a way of eating – casual dining. Guests could enjoy burgers and margaritas while dining out in a fun, casual environment. Over the years, like many bar and grill chains, Chili’s chased consumer trends, expanded the menu and tried to be all things to all Guests, therefore compromising execution and resulting in a fuzzy food reputation. On Sept.18, Chili’s is going back to its roots. The brand will cut its menu by 40 percent and invest millions to improve the food quality and value of its core menu items that first made the brand famous – burgers, ribs and fajitas.

“We value every Guest and we know that cutting even one entrée like Mango Chili Tilapia, or a delicious appetizer like Crispy Asparagus could disappoint a Guest who loves that dish,” said Kelli Valade, president of Chili’s. “But, Guests have also told us they know that today no restaurant can be everything to everyone. So, by eliminating 40 percent of our menu, we’ve reinvested in meatier burgers, ribs and fajitas – the items that we’ve always been known for. We apologize to any Guest who misses a departed dish, but with this bold move we commit to all Guests to do a better job of serving our famous food on every visit, in every restaurant.”

The Backstory
Chili’s opened its first restaurant on the corner of Greenville Avenue in Dallas in 1975. Back then, the restaurant was known as a burger shack with 25 menu items, beer and margaritas included. In 1986, Chili’s popularized an emerging dish called fajitas (the menus at that time spelled out how to pronounce the dish: “fa-heet-ah”). From there, Chili’s taught Americans how to sing about baby back ribs.

But, as the popularity of bar and grill restaurants expanded, so did the Chili’s menu. In Jan. 2017, the menu peaked with 125 appetizers, entrees, desserts, cocktails and add-ons, including sections devoted to burritos, enchiladas and flatbreads, with ingredients ranging from cauliflower to quinoa, making it one of the largest chain restaurant menus. That’s when Chili’s decided to take the bold step of slashing the menu by 40 percent and reinvesting in the core items that have been the foundation of the brands’ broad appeal for decades. The result is a 75 item, “less is more” menu, which will be available at all Chili’s restaurants nationwide on Sept. 18.

About Chili’s Grill & Bar
Chili’s® Grill & Bar is the flagship brand of Dallas-based Brinker International, Inc. (NYSE: EAT), a recognized leader in casual dining. Known for their signature menu items – burgers, ribs and fajitas– Chili’s offers fresh, bold and unexpected flavors. Each ChiliHead at more than 1,600 locations in 31 countries and two territories takes great pride in Chili’s purpose of connecting with and serving Guests and giving back to the communities in which they are located. In addition to Chili’s, Brinker owns and operates Maggiano’s Little Italy®. For more brand-related information, visit chilis.com.