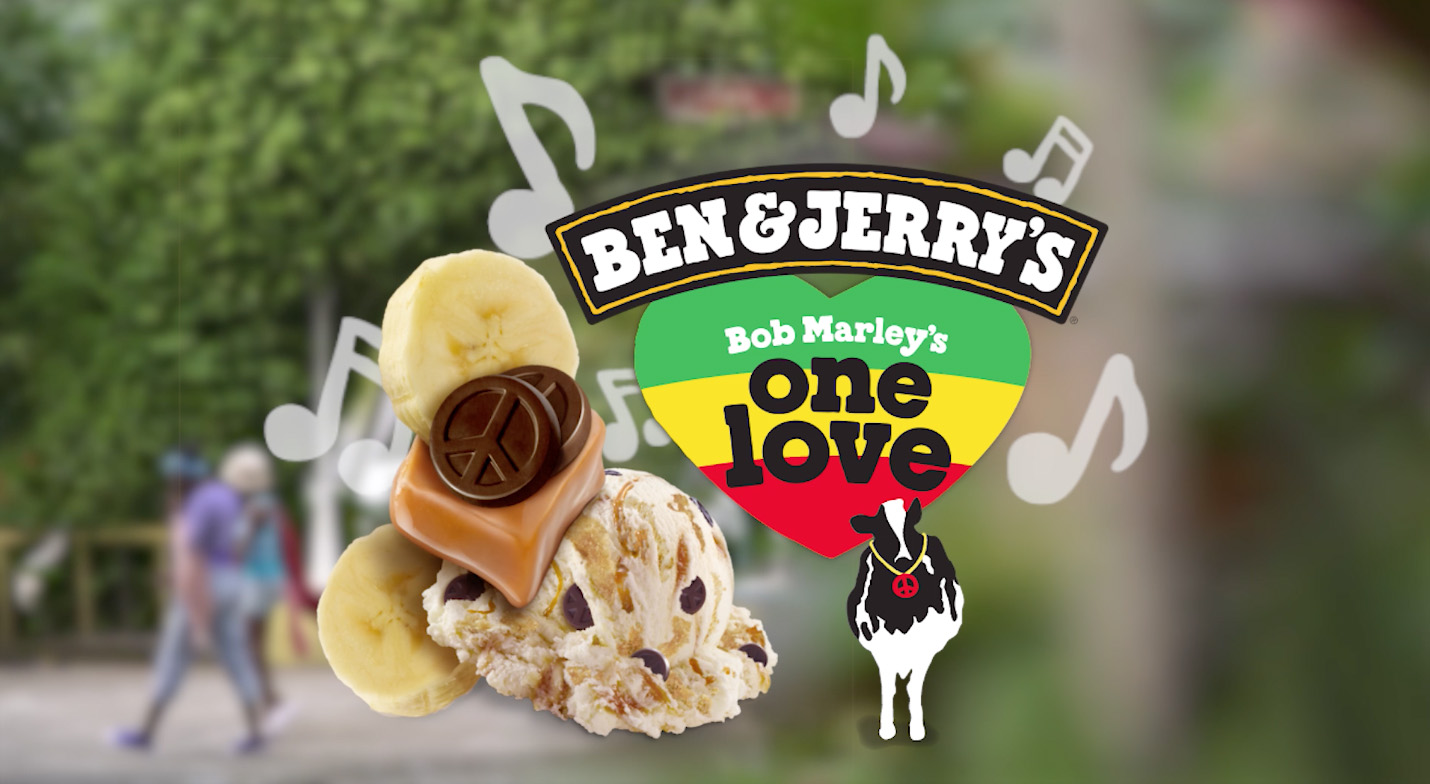 Burlington, VT—May 11, 2017— “One love, one heart...” So begins one of the most recognized songs in reggae history. Bob Marley’s memorable refrain is a call for global compassion, and is a perfect anthem for Ben & Jerry’s latest flavor, One Love. The flavor concoction that came to fruition in partnership with the Marley family pays homage to the legendary performer and his vision for a better world.

A portion of the proceeds from each One Love pint sold will benefit Jamaica’s One Love Youth Camp, a program run by The Bob Marley Foundation and Partners for Youth Empowerment.

After the flavor enjoyed tremendous success in the United Kingdom last year, One Love is now making a splash on this side of the pond by sharing its mission-driven deliciousness with fans in the U.S. One Love is an enchanting harmony of banana ice cream, caramel and cookie swirls, and chocolatey peace signs.

The Marley-inspired flavor and partnership was celebrated May 22nd when Ziggy Marley, musician and eldest son of Bob Marley, hosted performances by Aaron Nigel Smith and others at an invitation-only party at the iconic Roxy Theatre on the Sunset Strip. The kickoff was followed immediately by the first official listening party of Bob Marley’s reimagined Exodus 40 album – produced by Ziggy and reissued for its 40th anniversary. 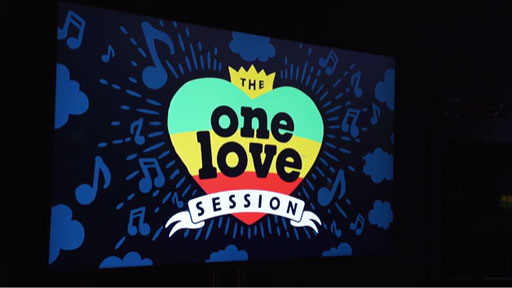 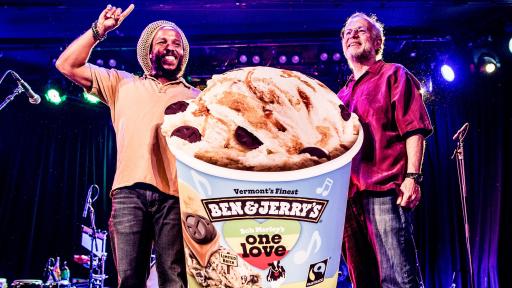 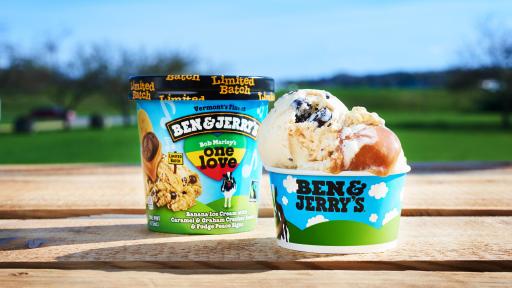 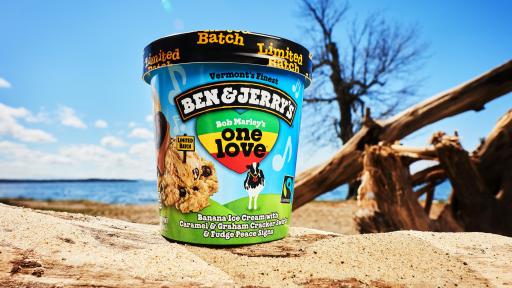 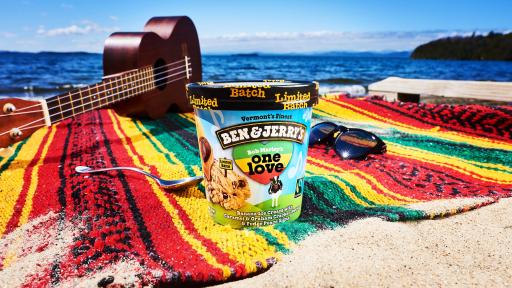 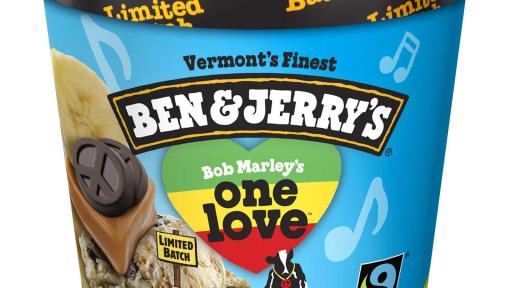 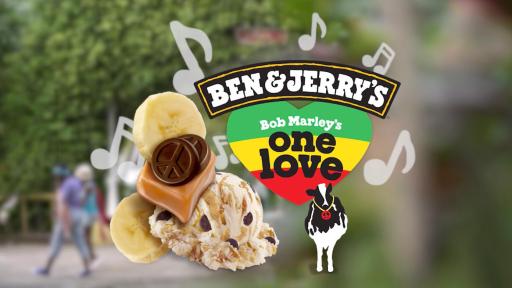 Celebrate the legacy of #BobMarley with @benandjerrys newest flavor, One Love!  Tweet

In song and in words, Ziggy Marley epitomizes his father’s spirit in saying: “The One Love Youth Camp positively affects youth in Jamaica, providing social and interpersonal tools they can use throughout life. The youth are our future and we are thankful for our partnership with Partners for Youth Empowerment and Ben & Jerry’s.”

In a world of uncertainty, there is a lot to be learned from Marley. “Bob Marley stood for more than just music – he advocated for social change and inspired millions to think about peace, love, and equality,” said Jerry Greenfield, Ben & Jerry’s CoFounder. “Ben & Jerry’s has long strived to champion love and social justice, and by partnering with the Marley family we’re happy to play a small role in supporting Marley’s vision for a sweeter world.”

No need to wait in vain for this flavor. Fans can find this limited batch flavor in Scoop Shops & retailers nationwide. For more information about One Love Youth Camp and the One Love ice cream flavor, check out: www.Benjerry.com/onelove

As an aspiring social justice company, Ben & Jerry’s believes in a greater calling than simply making a profit for selling its goods. The company produces a wide variety of super-premium ice cream, yogurt and sorbet using high-quality ingredients. Ben & Jerry’s incorporates its vision of Linked Prosperity into its business practices in a number of ways including a focus on values-led sourcing. In 2015 the company completed its transition to using entirely non-GMO (genetically modified organisms) ingredients by source as well as to fully source Fairtrade-certified ingredients wherever possible, which benefits farmers in developing countries. Ben and Jerry’s products are distributed in 35 countries in supermarkets, grocery stores, convenience stores, franchise Ben & Jerry’s Scoop Shops, restaurants and other venues. Ben & Jerry’s, a Vermont corporation and wholly-owned subsidiary of Unilever, operates its business on a three-part Mission Statement emphasizing product quality, economic reward and a commitment to the community. Ben & Jerry’s became a certified B Corp (Benefit Corporation) in 2012. The Ben & Jerry’s Foundation’s employee-led grant programs totaled $2.5MM in 2016 to support economic and social justice, environmental restoration, and peace through understanding. For the inside scoop on Ben & Jerry’s visit www.benjerry.com.

Bob Marley, a Rock and Roll Hall of Fame inductee, is notable not only as the man who put reggae on the global map, but, as a statesman in his native Jamaica, he famously brought together the country’s warring factions. Today, Bob Marley remains one of the 20th century’s most important and influential entertainment icons. Marley’s lifestyle and music continue to inspire new generations as his legacy lives on through his music. In the digital era, he has the second-highest social media following of any posthumous celebrity, with the official Bob Marley Facebook page drawing more than 74 million fans, ranking it among the Top 20 of all Facebook pages and Top 10 among celebrity pages. Marley’s music catalog has sold millions of albums worldwide. His iconic collection LEGEND holds the distinction of being the longest-charting album in the history of Billboard magazine’s Catalog Albums chart and remains the world’s best-selling reggae album. Marley’s accolades include inductions into the Rock and Roll Hall of Fame (1994) and ASCAP Songwriters Hall of Fame (2010), a GRAMMY® Lifetime Achievement Award (2001), multiple entries in the GRAMMY® Hall Of Fame, and a star on the Hollywood Walk of Fame (2001).  For more information visit: bobmarley.com and facebook.com/bobmarley.