Get Marshmallow Moon for a Limited Time! 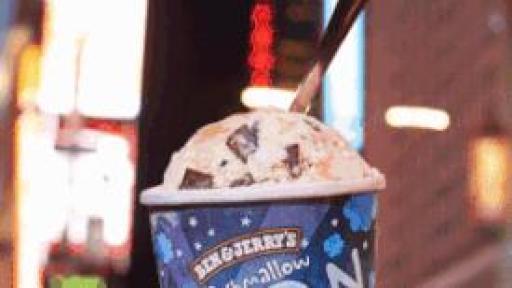 "I'm so excited about Marshmallow Moon. And the name totally makes sense, because the Tonight Show logo has a moon, and I have a body like a marshmallow.”
—Jimmy Fallon

Burlington, VT—November 2, 2017— Tonight Show host Jimmy Fallon had a special treat for lucky fans in Studio 6B last night: they were the very first ones to get their hands on Jimmy’s latest Ben & Jerry’s flavor. The new concoction, Marshmallow Moon, is a vanilla ice cream with marshmallow and graham cracker swirls and fudge flakes and is available only for an extremely limited time on Ben & Jerry’s e-commerce store and participating Scoop Shops. This flavor kicks off Ben & Jerry’s Special Stash offering, where the ice cream maker will churn out small-run artisan batches of funky flavors available in Scoop Shops and store.benjerry.com for fans to purchase for a limited time only.

The Marshmallow Moon flavor was developed over two years ago and almost netted the position in place of Fallon’s current full-time flavor, Tonight Dough. Tonight Dough has earned a spot as one of Ben & Jerry’s top ten flavors ever since its release. Like Tonight Dough, all of Fallon’s proceeds from every Marshmallow Moon pint sold will benefit the SeriousFun Children’s Network - an organization committed to providing children living with serious illnesses with life-changing camp experiences, in the safest and most supportive environment and with the highest-quality medical care. Proceeds from Tonight Dough have raised more than $1.2 million dollars for SeriousFun, supporting programs that have a lasting impact on the lives of children with serious illnesses and their family members around the world, totally free of charge.

“I'm so excited about Marshmallow Moon,” Fallon said. “And the name totally makes sense, because the Tonight Show logo has a moon, and I have a body like a marshmallow.”

While the host poked fun at himself, SeriousFun Children’s Network CEO Blake Maher reiterated the importance of the relationship in a Fallon-friendly format, a thank you note: “Thank you Ben & Jerry’s and Jimmy Fallon for helping us serve up two big scoops of camp magic to kids living with serious illnesses all around the world. Your support in raising both funds and awareness is essential to providing truly transformative camp experiences to children who need them most.”

Ben & Jerry’s is excited to unlock the vault with the first of its Special Stash flavors. Fans can purchase Marshmallow Moon and future Special Stash offerings online at store.benjerry.com and at participating Ben & Jerry’s Scoop Shops. Fans can also request Marshmallow Moon via delivery services including UberEATS, who will be offering free delivery for the flavor in five cities during the launch week including Los Angeles, Seattle, Portland, Memphis, New York City and Hoboken. These small batches are made in an extremely limited number and when they’re gone, they’re gone! 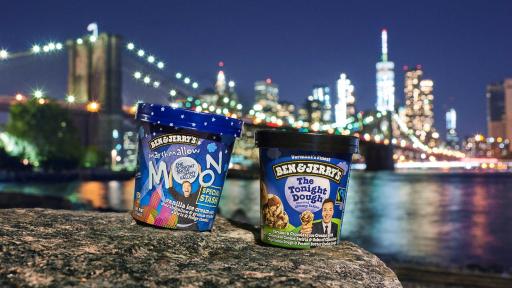 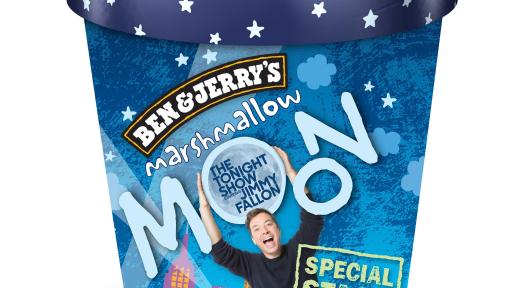 For more information about The Tonight Show starring Jimmy Fallon, SeriousFun Children’s Network, or Ben & Jerry’s follow the links below:

About the Tonight Show
“The Tonight Show Starring Jimmy Fallon” made its debut from Studio 6B in Rockefeller Center on Feb. 17, 2014. Emmy Award- and Grammy Award-winning comedian Jimmy Fallon brings a high-tempo energy to the storied NBC franchise with his welcoming interview style, love of audience participation, spot-on impersonations and innovative sketches. An American television institution for over 60 years, “The Tonight Show” continues to home to big-name celebrity guests and a stage for top musical and comedic talent. Taking a cue from predecessors, including hosts Johnny Carson and Jay Leno, Fallon carries on the tradition audiences know and love. Known for his huge online presence, Fallon also brings along many popular segments, celeb sketches and musical parodies including Hashtags, Thank You Notes and Slow Jam the News. The critically praised Grammy-winning group The Roots serves as “The Tonight Show” house band. From Universal Television and Broadway Video, “The Tonight Show Starring Jimmy Fallon” is executive produced by Lorne Michaels and produced by Gerard Bradford, Mike DiCenzo and Katie Hockmeyer. It tapes before a live studio audience.

About SeriousFun Children’s Network
SeriousFun Children's Network is a global community of 30 camps and programs serving children with serious illnesses and their families, always free of charge. Founded by Paul Newman, SeriousFun has served more than 864,000 children and their family members from more than 50 countries since the first camp opened in 1988. Each member camp is an independent, not-for-profit organization dependent upon private funding to serve all children at no cost to their families. To learn more about SeriousFun, visit www.seriousfunnetwork.org.

About Ben & Jerry’s
As an aspiring social justice company, Ben & Jerry’s believes in a greater calling than simply making a profit for selling its goods. The company produces a wide variety of super-premium ice cream, yogurt and sorbet using high-quality ingredients. Ben & Jerry’s incorporates its vision of Linked Prosperity into its business practices in a number of ways including a focus on values-led sourcing. In 2015 the company completed its transition to using entirely non-GMO (genetically modified organisms) ingredients by source as well as to fully source Fairtrade-certified ingredients wherever possible, which benefits farmers in developing countries. Ben and Jerry’s products are distributed in 35 countries in supermarkets, grocery stores, convenience stores, franchise Ben & Jerry’s Scoop Shops, restaurants and other venues. Ben & Jerry’s, a Vermont corporation and wholly-owned subsidiary of Unilever, operates its business on a three-part Mission Statement emphasizing product quality, economic reward and a commitment to the community. Ben & Jerry’s became a certified B Corp (Benefit Corporation) in 2012. The Ben & Jerry’s Foundation’s employee-led grant programs totaled $2.5MM in 2016 to support grassroots organizing for social and environmental justice around the country.

For the inside scoop on Ben & Jerry’s visit www.benjerry.com.