Learn more about the plan to
save reefs from extinction. #50Reefs

A Global Plan to Save Coral Reefs from Extinction

BALI, Indonesia (Feb. 23, 2017) – A global plan to save coral reefs from complete eradication caused by climate change, pollution and poor fishing practices launched today at The Economist World Ocean Summit in Bali. The initiative, called 50 Reefs, brings together leading ocean, climate and marine scientists as well as conservation practitioners from around the world to develop a list of the 50 most critical coral reefs to protect.

50 Reefs will be the first global plan to save the most biodiverse ecosystem on the planet. The final list and corresponding initiatives, to be announced later this year, will raise awareness of the increasing severity of climate change impacts on the ocean and catalyze the global action and investment required to protect these important reef systems for the future.

The launch comes at a perilous moment for coral reefs, as current estimates indicate that 90 percent will disappear by 2050. A unique philanthropic coalition of innovators in business, technology and government are supporting 50 Reefs, led by Bloomberg Philanthropies with The Tiffany & Co. Foundation and The Paul G. Allen Family Foundation, with the aim of preventing the worst economic, social, and environmental impacts of this enormous crisis.

Coral reefs sustain life, jobs and culture. We can save them if we act now. 50reefs.org #50Reefs Tweet 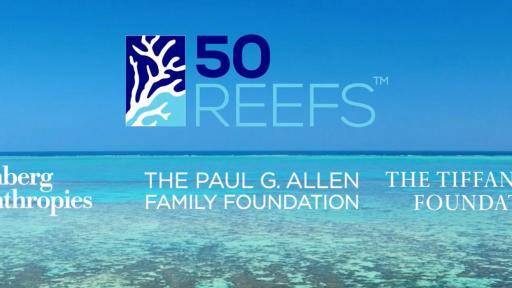 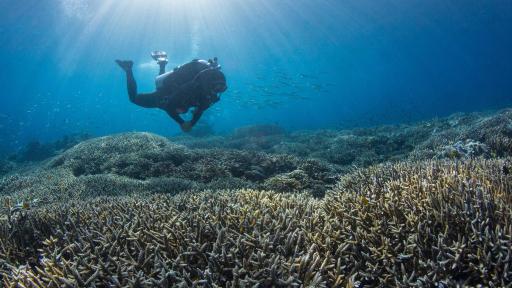 Bleached coral in the Maldives 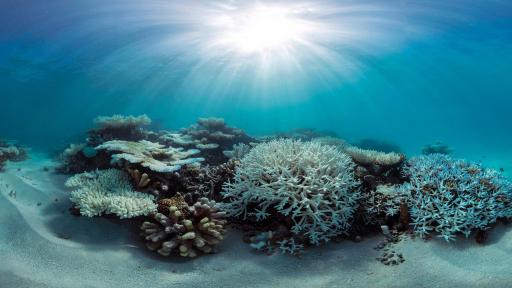 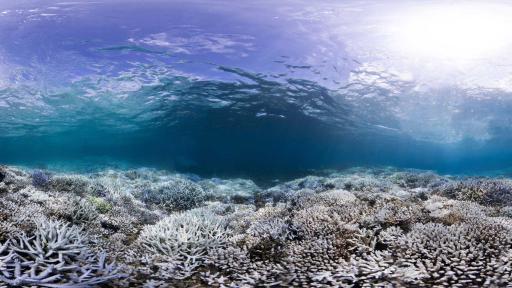 Before and after image of coral bleaching in American Samoa 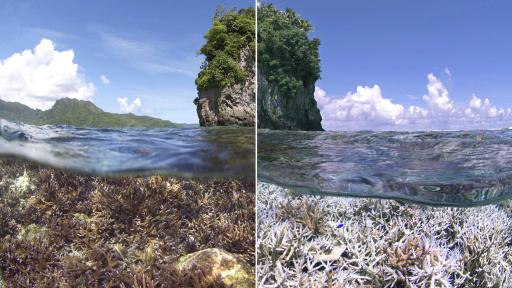 Turtle swimming over coral reef on the Great Barrier Reef 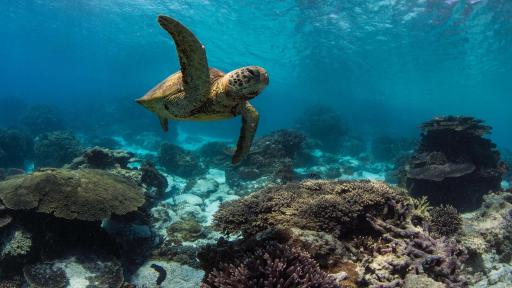 The 50 Reefs initiative builds on The Ocean Agency and the Global Change Institute at The University of Queensland shared experience carrying out the most comprehensive global survey of coral reefs and coral bleaching ever recorded (in partnership with Google and XL Catlin). This work is also the subject of the 2017 Sundance Film Festival Audience Award-winning documentary, “Chasing Coral,” which will be released worldwide on Netflix.

“When people think of climate change, they often think of extreme heat, severe storms, and raging wildfires. But some of the most disastrous effects of climate change are out of sight – on the ocean floor. In fact, 90% of coral reefs are expected to disappear by 2050 and saving the remaining coral reefs are critical. Without coral reefs, we could lose up to a quarter of the world’s marine biodiversity and hundreds of millions of the world’s poorest people would lose their primary source of food and livelihoods. We must not allow this to happen,” said Michael R. Bloomberg, UN Secretary-General’s Special Envoy for Cities and Climate Change.

The impact of climate change can be marked by mass coral bleaching events, which occur when reefs are under stress from rising sea temperatures. The latest global mass coral bleaching event is responsible for the worst coral die-off ever recorded. Scientists predict that within 30 years the planet could face a complete collapse of the coral reef ecosystem, including the loss of thousands of species of fish and other important organisms. Loss of coral reefs poses a threat to the ecosystem as well as to livelihoods connected to oceans.

The over-exploitation of fisheries, coastal development, and pollution has had serious impacts on coral reefs. In some places, reefs have been entirely destroyed, while in others they are a pale shadow of what they once were. The threat of climate change has added an increasing burden and is now considered to be the number one threat to the future of coral reefs. Despite their importance, coral reefs are facing ecological extinction.

Risks to Ecosystems and People:

Coral reefs worldwide have been estimated to have a conservative value of $1 trillion, which generates at least $300-400 billion each year in terms of food and livelihoods from tourism, fisheries and medicines according to recent reports (WWF 2015, Smithsonian Institute).

The extinction of coral reefs poses a critical threat for the hundreds of millions of people in some of the world’s developing countries who depend on reefs for their livelihoods, culture, food security, and nutrition. One in every four fish in the ocean lives part of its life on a coral reef. In the coming decades this could mean that half a billion people will lose access to a major source of protein, with developing countries being disproportionately more vulnerable.

“This is an all hands on deck moment,” said Professor Ove Hoegh-Guldberg, Director of the Global Change Institute at The University of Queensland. “We are establishing the first global coalition of philanthropic, governmental and non-governmental organizations that will be aimed at slowing the decline of the world’s coral reefs -- thereby preserving the livelihoods and culture of reef-dependent communities all over the world.”

Strategy to be Developed by Leaders in Ocean Science and Conservation:

“This initiative was developed after witnessing unimaginable loss of reefs over the last two years,” said Richard Vevers, founder of The Ocean Agency. “Even if the targets set by the Paris climate agreement are met, we will lose about 90 percent of our reefs by mid-century. 50 Reefs gives us hope that we can save enough of these surviving reefs to ensure they can bounce back over time.”

The 50 Reefs initiative employs a three-pronged strategy to address the coral crisis:

The aim is to identify a list of high priority coral reefs that have the best chance of surviving climate change, and which will aid the recovery of coral reef ecosystems once global temperatures have stabilized. The list will be announced in late 2017 and represent a diverse portfolio of reefs to maximize returns for biodiversity, ecosystems and people. This science-based initiative intends to protect enough coral to ensure the re-establishment of coral reef resources in a climate-stable future.

As the project unfolds through 2017, a panel of world leading scientists will oversee a process to prioritize reefs worldwide (deploying a transparent ‘decision algorithm’ developed at The Centre for Excellence in Environmental Decisions at The University of Queensland). The datasets used (e.g. reef biodiversity, climate vulnerability, current health and reef connectivity) will be agreed upon by the independent panel of scientific experts drawn from some of the world’s leading organizations.

“What we already know about the future of our coral reefs is alarming: Without immediate action, we could lose this crucial ecosystem entirely within a few short decades,” said Paul G. Allen, philanthropist and Microsoft co-founder. “What we don’t yet know - the data gap leading scientists are seeking to fill through this initiative - are exactly where to focus critical conservation efforts to ensure the long-term survival of coral reef habitats.”

Conservation experts and practitioners from around the world will identify the types of regional interventions necessary to ensure reef survival until the climate stabilizes. The purpose is to catalyze global action and investments in key reef geographies prioritized in the survey.

To raise awareness of the coral reef crisis and the threat of ocean warming, the 50 Reefs initiative will coordinate communications on the individual reef systems; encourage influential support for effective marine protection; and shine a global spotlight on government and stakeholder action and inaction to stop climate change and to protect the 50 most important reefs.

“It is imperative that we protect coral reefs, cornerstones of healthy oceans, from the myriad of threats they are facing today, including the damaging effects of climate change,” said Anisa Kamadoli Costa, Chairman and President of The Tiffany & Co. Foundation. “We believe that the 50 Reefs initiative’s innovative approach will be critical to protecting beautiful, thriving coral reefs for future generations.”

About the Global Change Institute at The University of Queensland
The Global Change Institute at The University of Queensland (UQ), Australia, was established in 2010 as an independent source of game-changing research, ideas and advice for addressing the challenges of global change. GCI advances discovery, develops solutions and advocates responses that meet the challenges presented by climate change, technological innovation and population change. It has partnered with The Ocean Agency on a number of projects including the XL Catlin Seaview Survey which established the world’s first global baseline for coral reef health in 22 countries using semi-autonomous technologies and computer learning. UQ is one of the world’s premier teaching and research institutions. It is consistently ranked in the top 100 in four independent global rankings. With more than 48,000 students and 6,500 staff, UQ’s teaching is informed by research, and spans six faculties and eight research institutes. www.gci.uq.edu.au

About The Ocean Agency
The Ocean Agency is an Australian Not-For-Profit founded in 2010. It is dedicated to achieving ocean conservation through technology innovation, creative communication and global partnerships. Its first major project was the XL Catlin Seaview Survey (also a partnership with the Global Change Institute), which has become the most comprehensive global survey of coral reefs ever conducted, revolutionizing the speed, efficiency and cost of coral reef monitoring at scale. This is the project behind all the underwater imagery in Google Street View. The Ocean Agency is the only team to have ever travelled around the world to record and reveal a global bleaching event (the imagery taken with their specially developed cameras has appeared in virtually every major news publication.) This work is the subject of a new Netflix Original documentary called “Chasing Coral,” yet to be released.