Learn more about
My Life, Our Future

NEW YORK – February 28, 2017 – Today on Rare Disease Day, My Life, Our Future, a national program founded by leaders in the bleeding disorder community, including Bloodworks Northwest, the American Thrombosis and Hemostasis Network, the National Hemophilia Foundation and Bioverativ Inc., opened the largest research repository of its kind in the world to scientists. The My Life, Our Future Research Repository is a collection of genetic data and blood samples that are linked to phenotypic data from more than 5,000 people in the U.S. with hemophilia, a rare disorder that impairs the ability of one’s blood to clot. The My Life, Our Future Research Repository will allow researchers to advance the scientific understanding of the disorder, including genetic differences that affect bleeding severity and reaction to certain treatments. 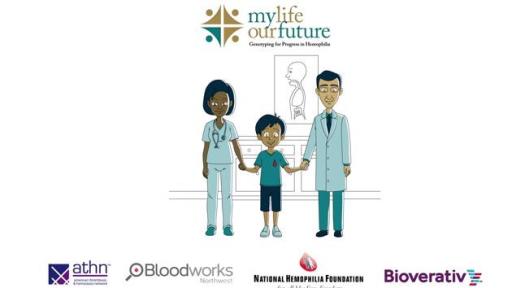 My Life, Our Future Infographic 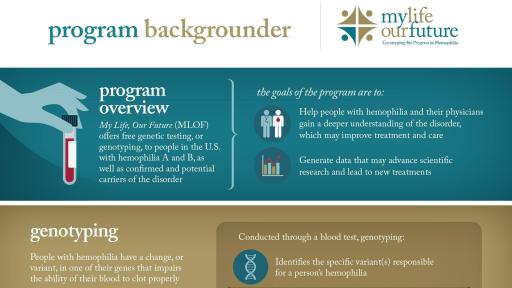 “Hemophilia is a complex disorder and prior to today, there was no genetic and phenotypic database of this scale aiding scientific innovation,” said Barbara Konkle, MD, associate chief scientific officer, Bloodworks Northwest, and principal investigator for My Life, Our Future. “With this new resource, researchers now have one source for the genetic data, repository samples and clinical data needed to investigate the many unanswered questions about hemophilia.”

My Life, Our Future was launched in 2012 to increase genotyping among hemophilia patients in the U.S., many of whom had not received a genetic test due to cost or lack of insurance coverage. By providing free genotyping, My Life, Our Future offers patients the opportunity to learn which genetic change causes their disorder; this is particularly valuable given hemophilia is a complicated disease that can be caused by nearly 4,000 genetic variants (mutations). Already, the initiative has identified more than 600 new genetic variants that cause hemophilia. Through the program, patients can also consent to add their de-identified genetic data and blood sample to the My Life, Our Future Research Repository being opened today for the purpose of advancing research; 83 percent have chosen to do so.

“We’re thankful to the thousands of people with hemophilia across the country who have opted to participate in this program,” said Val Bias, chief executive officer, National Hemophilia Foundation. “They will positively impact the lives of a new generation.”

The My Life, Our Future Research Repository is opening to U.S.-based investigators in 2017, before expanding to international applicants in 2018. Researchers can submit applications by visiting ATHN.org/MLOF. To access the samples and data in the My Life, Our Future Research Repository, scientists must submit a proposal to My Life, Our Future for evaluation by the research review committee – a multidisciplinary group of experts including a molecular pathologist, genetic counselor, research scientist, molecular biologist, genetic epidemiologist, molecular epidemiologist, geneticist, patient representative and hematologists. Approved researchers will be selected based on the scientific merit of their proposals and level of benefit to those with bleeding disorders.

“Over 100 hemophilia treatment centers across the country chose to participate in My Life, Our Future because they believed in the value of genotyping for their patients,” said Diane Aschman, president and chief executive officer, American Thrombosis and Hemostasis Network. “We are hopeful that the genotypic data and samples, when combined with the phenotypic data in the ATHNdataset as collected by the participating centers, will catalyze research that can improve care and outcomes for people with hemophilia.”

“This milestone has been made possible due to collaboration between people with hemophilia and their families, hemophilia treatment centers, and the founding organizations,” said Jaime Morales, MD, FAAP, executive director, medical affairs, Bioverativ. “As a company born from a legacy of innovation and commitment to serving people with blood disorders, Bioverativ is proud to support this unprecedented initiative.”

About My Life, Our Future
My Life, Our Future is a partnership of the American Thrombosis and Hemostasis Network, Bloodworks Northwest, the National Hemophilia Foundation and Bioverativ. The program offers free genotyping to people with hemophilia A and B in the U.S., as well as potential and confirmed carriers of the disorder. It is available at participating hemophilia treatment centers through the end of 2017. For more information about the program and its founding partners, visit www.MyLifeOurFuture.org.

Apply to Access the
My Life, Our Future Research Repository