Be a Community Hero

Crafty DIY-er created her suit from donated goods and won a trip to the Spider-Man: Homecoming premiere

ROCKVILLE (July 7, 2017) — Super hero fans around the country had a chance to put their own Spidey senses to the test by creating original DIY suits inspired by Sony Pictures’ new movie, “Spider-Man: Homecoming,” in theaters today, Friday, July 7 in the U.S. After narrowing the entries down to 10 semi-finalists and then five finalists, one especially crafty entrant won a trip to the world premiere screening of “Spider-Man: Homecoming” on Wednesday, June 28, 2017.

Tiffany Mink (@tiffmink) turned a red dress found at her local Goodwill store into a full-fledged, head-to-toe super hero outfit. Her video showing how she created the suit, along with the submissions from the other finalists, can be viewed at spidermandiy.com. Entrants were encouraged to put their super hero love to work alongside their senses of style, and to act as community heroes by sourcing materials for their suits from Goodwill, where the sale of donated goods creates job preparation, skills training, education assistance and support services for people who face challenges to finding employment. Tiff’s purchases equates to 40 minutes of job search training for a Goodwill participant.

“Tiffany’s crafty sense of style and creative approach set her apart from the crowd,” said Jim Gibbons, president and CEO at Goodwill Industries International. “She captivated our attention by combining the can-do attitude that makes Spider-Man a longtime fan favorite with the DIY aesthetic Goodwill shoppers have cultivated for more than a century.”

Read More
Spider-Man fans can do their part in this social and environmental effort by shopping at Goodwill. 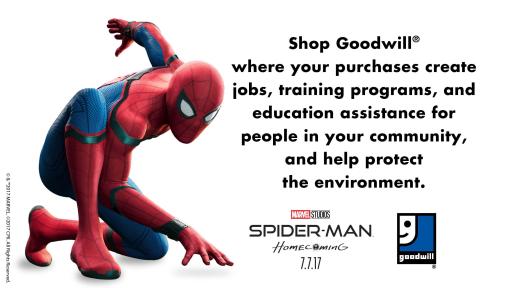 Be a hero in your community 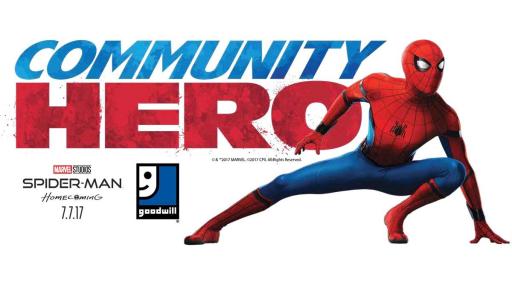 Shop Goodwill! Show your #HeroStyle and help build a brighter future for your community. 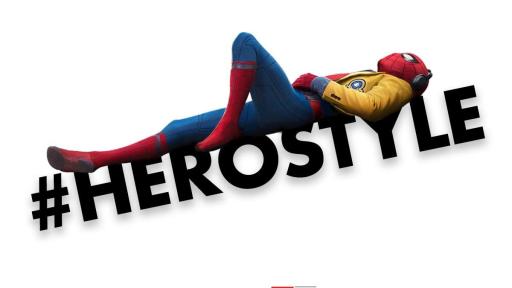 Goodwill, Sony Pictures and Marvel share a commitment to social responsibility and the environment, and will continue to remind the public that they can be heroes in their communities through an ongoing campaign featuring Spider-Man. By collecting and selling donated goods, Goodwill diverts more than 3 billion pounds of clothing and textiles from landfills each year and repurposes clothing donations to change people’s lives. Spider-Man fans can do their part in this social and environmental effort by shopping at Goodwill. By aligning Spider-Man with Goodwill, Sony Pictures and Marvel are demonstrating their commitment to these critical social issues.

About Goodwill Industries International
Goodwill Industries International (GII) is a network of 162 community-based, autonomous organizations in the United States and Canada with a presence in 13 other countries. GII is a 501(c)(3) nonprofit that is recognized by GuideStar with its Platinum Seal of Approval, the organization’s highest rating for charities. GII was also ranked by Enso as the #1 brand doing the most good in the world for two consecutive years, and was the only nonprofit brand rated in Forbes’ 20 most inspiring companies for three consecutive years. Local Goodwill organizations are innovative and sustainable social enterprises that create job training programs, employment placement and other community-based programs by selling donated clothing and household items in more than 3,200 stores collectively and online at shopgoodwill.com®. Local Goodwill organizations also build revenue and create jobs by contracting with businesses and government to provide a wide range of commercial services, including packaging and assembly, food services preparation, and document imaging and shredding. Last year, local Goodwill organizations collectively placed more than 312,000 people in employment in the United States and Canada. In addition, more than 35 million people used computers and mobile devices to access Goodwill education, training, mentoring and online learning services to strengthen their skills, and more than 2 million people received in-person services. To learn more, visit goodwill.org.

For more information or to find a Goodwill location near you, use the online locator at Goodwill.org or call (800) GOODWILL. Follow us on Twitter: @GoodwillIntl and @GoodwillCapHill, and find us on Facebook: GoodwillIntl or Instagram: GoodwillIntl.

About Spider-Man: Homecoming
A young Peter Parker/Spider-Man (Tom Holland), who made his sensational debut in Captain America: Civil War, begins to navigate his newfound identity as the web-slinging super hero in Spider-Man: Homecoming. Thrilled by his experience with the Avengers, Peter returns home, where he lives with his Aunt May (Marisa Tomei), under the watchful eye of his new mentor Tony Stark (Robert Downey Jr.). Peter tries to fall back into his normal daily routine - distracted by thoughts of proving himself to be more than just your friendly neighborhood Spider-Man - but when the Vulture (Michael Keaton) emerges as a new villain, everything that Peter holds most important will be threatened. Directed by Jon Watts. Produced by Kevin Feige and Amy Pascal. Screenplay by Jonathan Goldstein & John Francis Daley and Jon Watts & Christopher Ford and Chris McKenna & Erik Sommers, Screen Story by Jonathan Goldstein & John Francis Daley, Based on the Marvel Comic Book by Stan Lee and Steve Ditko.