Half of Canadian girls feel paralyzed by the fear of failure during puberty*: new Always® #LikeAGirl video aims to change this and encourages girls everywhere to Keep Going #LikeAGirl

TORONTO – August 16, 2017 – At puberty, girls’ confidence plummets. The most recent Always Confidence & Puberty Survey1 reveals that half of girls feel paralyzed by a fear of failure during puberty. This fear is so intense that many girls opt out of important growth opportunities during this time, like taking on challenges and trying new things. Always, the leader in global feminine care, is on a mission to stop this drop in confidence by changing how girls perceive setbacks and encouraging them to embrace failure as part of learning and crucial to growth. 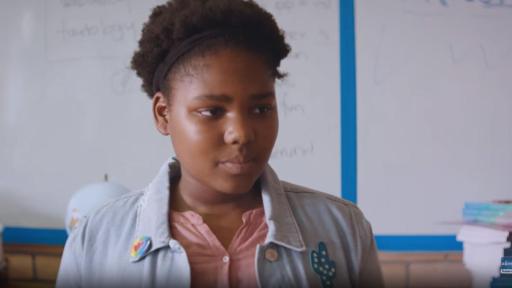 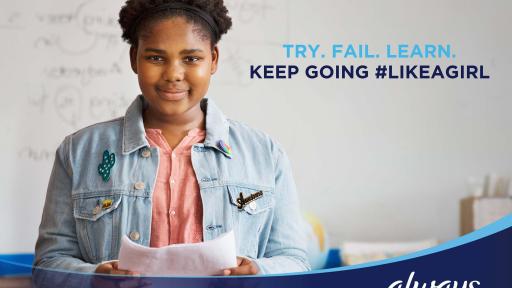 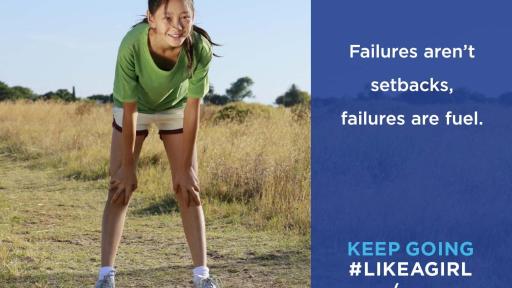 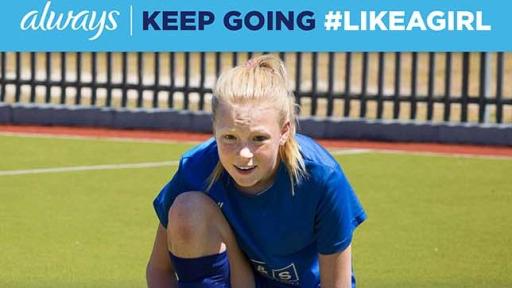 According to the survey of Canadian girls aged 16-24, 85% of girls report that the pressure to please others and be perfect lead them to fear any misstep, and 79% agree that social media is a key contributor in this feeling. But experience, and now research, shows that persevering through a failure is actually key to learning and building new skills. Always wants to encourage all girls to embrace failing when it happens and use it as a tool to build their confidence, empowering them to keep growing and Keep Going #LikeAGirl.

To help shed light on the issue, and to inspire girls to keep going, Always partnered with acclaimed director Lucy Luscombe to show how girls feel about failure, especially during puberty. The new #LikeAGirl video brings a fresh approach to the campaign, following a group of girls through a day in their lives at school. From school projects, to drama rehearsals, chess matches and more, the girls are seen in real-life situations that capture how intense the fear of not measuring up can be. See the video and hear the rallying call for all girls to embrace failure as fuel by watching Always #LikeAGirl – Keep Going here: https://youtu.be/P_MhsbRiFyI

“I am such a fan of the Always #LikeAGirl campaign, so I am thrilled to be part of this important movement” said Luscombe. “I remember so many times when I felt afraid to fall short and the lengths I’d go to avoid it, but I was so inspired by the girls we met during filming. It is my goal that this video helps us all reframe how we think of setbacks and encourage everyone to inspire girls to see these experiences as a way to build their confidence and keep going.”

As they approach adulthood and look back, many girls recognize that the moments when they struggled through a setback led them to grow more resilient. In fact, the top three things gained from working through a failure are increased knowledge, strength and confidence. That’s why it is important for society to encourage girls to keep going even when they don’t immediately succeed. Research shows that girls need that societal support to truly thrive. In fact, more than 90% of girls agree that if girls felt failing was okay during puberty, they would keep doing the things they loved, take on more challenges and grow in confidence.

“Learning from the Always Confidence & Puberty Survey that one in two girls feel that if they fail society will reject them is heart-breaking and moreover alarming,” said Michèle Baeten, Always Associate Director, Procter & Gamble. “Always will do all that we can to normalize and reframe failure as something that is not to be feared, but something that is crucial to growth and building confidence. Our goal is to create an environment where girls feel they have full support to try new things, make mistakes, and are encouraged to keep going.”

Join Always to encourage girls everywhere to keep going, even when they fail. Share a post, video or image to show how you try, fail, learn and Keep Going #LikeAGirl to inspire others to do the same.

In Canada, Always has championed girls’ confidence for over 30 years. In 2016, Always partnered with the Canadian Women’s Foundation by helping to support confidence-focused programming for 1,000 girls in 44 communities. This support will continue through 2017. This year, Always has also partnered with FitSpirit, an organization that provides opportunities for girls 12 to 17 to adopt a healthy and active lifestyle in a fun environment. Since 2007, FitSpirit has reached thousands of teenage girls in Ontario and Quebec through physical activity.

About Always #LikeAGirl
The Always #LikeAGirl movement is being fueled by the millions of girls around the world who are changing #LikeAGirl to mean amazing things. The campaign launched in June 2014 and was inspired by the insight that the start of puberty and the first period mark the lowest moment in confidence for girls. It demonstrated the profound effect the phrase “like a girl” can have on girls’ self-confidence and it inspired a movement, which has started to change public perception. After seeing the Always #LikeAGirl video, most people (76 percent of women ages 16 to 24 and 59 percent of men) said the video changed their perception of the phrase “like a girl,”2 according to the Always Confidence & Puberty Wave II Study. But Always could not stop there. In 2015, a new Always study3 revealed that 72 percent of girls feel society limits them by telling them what they should and should not do or be. And more than half of girls felt that societal limitations would be the same or worse ten years from now. Always could not accept that and launched the Unstoppable #LikeAGirl campaign in July 2015 to empower all girls to show the world that they could do or be anything and everything. In March 2016, the brand tackled the subtle bias conveyed through emojis, and the resulting conversation led the UNICODE Consortium to rethink their approach to emojis – releasing 44 new “girl-power” emojis, now incorporated into mobile operating systems globally. Most recently, in June 2016, the brand released new survey data that found that half of girls quit sports by age 17 and that seven in ten girls do not feel encouraged to play, despite data that links sports participation to increased confidence. To help keep girls in sports, Always launched the #LikeAGirl – Keep Playing initiative, which coincided with the Rio 2016 Olympic Games & was supported by over 30 Olympic Athletes. The campaign resulted in 70 percent now believing that girls would be more confident if they played sports4. For more information about the Always #LikeAGirl movement, visit www.always.com.

In 2016, Always was proud to announce that all Feminine care owned production sites have achieved zero manufacturing waste to landfill. Please visit https://us.pg.com/sustainability/environmental-sustainability/focused-on/waste for more information.