Hundreds of competitive spirits, friends and families gathered at Yas Waterworld for the fun-filled weekend where they had the chance to participate in different challenges to see if they had what it takes to become GUINNESS WORLD RECORDS™ title holders! Participants competed to gain a spot on the top 10 leader board to then qualify for the chance to be judged by the Guinness World Records  adjudicator in an official attempt.

Despite over hundreds of participants trying their hand at these world breaking titles, it was George Massoud, Jacob Cummings, Iryana Suprun, Ryan Watkins and Rashad Al Ghadban respectively that were dubbed champions and official GUINNESS WORLD RECORDS™ breakers.

Ryan Watkins, General Manager at Yas Waterworld Abu Dhabi said: “As the Middle East’s leading waterpark, we were very excited to collaborate with GUINNESS WORLD RECORDS™ on this event and Channel 4 Radio, which allowed us to give guests a unique weekend filled with lots of fun. In this event champions were made, with six new individual GUINNESS WORLD RECORDS™ titles set, and fun memorable moments were created with every record attempted – truly giving guests an experience unlike anything else. I was lucky enough to attend the event with my family and even participate in some of the challenges, ultimately setting a new record and enjoying a win.”

Considered the pearl of Yas Island, Yas Waterworld is a one-of-a-kind waterpark that has been attracting thrill seekers, families and waterpark fans from across the globe for unparalleled water experiences – garnering to date more than 40 industry awards and accolades from leading bodies within the industry. The waterpark is home to 45 rides, slides and attractions, six of which can’t be found anywhere else in the world. Every experience introduced combines innovative aquatic adventures with local personality and draws inspiration from the UAE’s pearl-diving heritage to offer guests an unrivalled waterpark experience.

Managed and operated by Farah Experiences, Yas Theme Parks and attractions offer guests a wide range of family-friendly rides, experiences and entertainment shows. Located within minutes of one another, Ferrari World Abu Dhabi, Yas Waterworld, Warner Bros. World™ Abu Dhabi and CLYMB™ Abu Dhabi continue to abide by precautionary measures to ensure a safe and enjoyable experience for all. 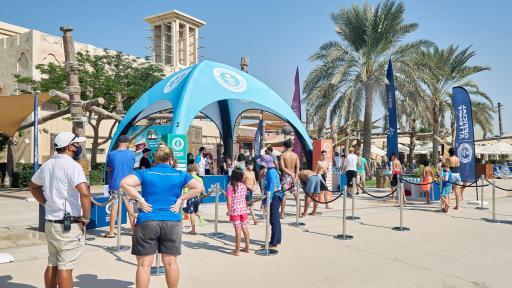 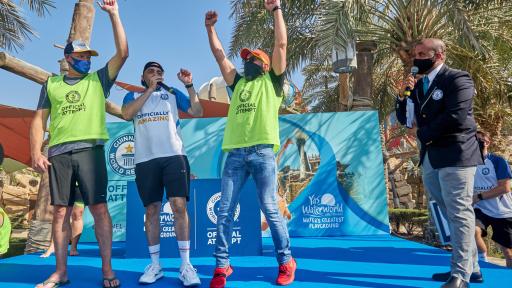 Located in Abu Dhabi, Yas Waterworld is a one-of-a-kind waterpark that draws inspiration from the UAE’s pearl diving heritage offering families fun-packed adventures, the warmest welcome, and the most engaging themed experience.

Home to more than 45 exhilarating rides, slides and attractions, and a diversity of seasonal events and shows, guests of Yas Waterworld can enjoy the chance to create new memories with every visit.

Since opening its doors in 2013, Yas Waterworld took home over 50 accolades from prestigious industry entities. Most recently in 2021, the waterpark was named ‘Middle East’s Leading Waterpark’ at the World Travel Awards and ‘Best Waterpark in the Middle East’ by the International Travel Awards. Yas Waterworld also won a Bronze award at the blooloop Innovation Awards 2021 for its ‘Underwater VR experience’.

Considered the pearl of Yas Island, the UAE’s premium leisure and entertainment destination, Yas Waterworld combines fun aquatic adventures with local personality to provide guests with an experience unlike anything else.