PR Newswire – (San Francisco) – December 1, 2015
BabyCenter®, the #1 pregnancy and parenting digital resource, today released the results of its highly anticipated annual Baby Names Survey and the Top 100 Baby Names of 2015. Jackson held on as the top boys’ name for the third year, and Sophia leads the girls for the sixth year in a row. Sophia, Emma, and Olivia have now been the three most popular girl names for four years running. Despite the staying power of most names, there was some movement; Madison rose into the top 10 again and ended Madelyn’s one-year stint as a top name.

“Our data shows that the top 10 list stays relatively stable for three to five years. Sophia has been a powerhouse for six years, thanks to the variety of spelling options and the multi-ethnic, multi-language appeal of the name. I predict Jackson’s popularity will be more fleeting. We’ll likely have a new number-one boys’ name next year,” said Linda Murray, BabyCenter Global Editor in Chief.

And for the first time, technology and science are emerging as influences on parents’ naming decisions. TV continues as a dominant force, and there’s a cultural shift in our attitudes toward gender. (See below for more detail on top trends for 2015.) 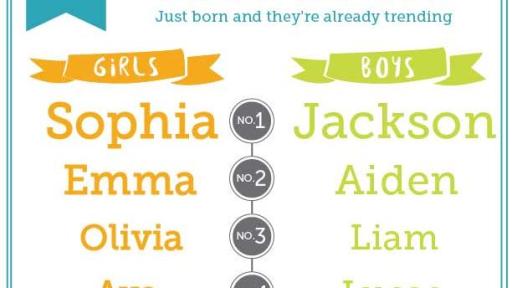 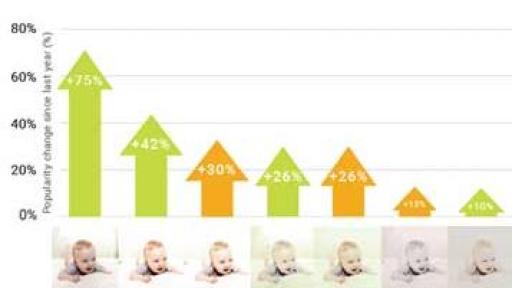 Baby Names That Were Born To Rule 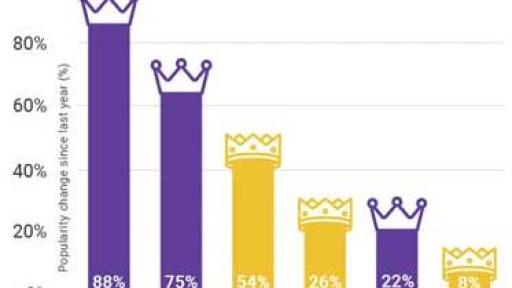 Based on the names of more than 340,000 babies born in 2015 to moms registered on the BabyCenter website, BabyCenter’s Top 100 Baby Names list combines names that sound the same but have different spellings, making it a true measure of baby name popularity. The website also conducts its Baby Names Survey each year, talking directly to new and expecting parents about their baby name decisions and diving deep into the psychology and trends surrounding baby naming.

The hottest baby name trends of 2015

Instagram
The wildly popular photo-sharing app Instagram has become a new source of name inspiration for today’s expectant parents. Many of Instagram’s filter names are gaining in popularity as baby names including Lux (up 75 percent since 2014), Ludwig (up 42 percent), Amaro (up 26 percent), Reyes (up 10 percent), Hudson (up 4 percent), and Kelvin (up 3 percent) for boys. Additionally, Valencia (up 26 percent), Juno (up 30 percent), and Willow (up 13 percent) are on the rise for girls.

“This is the first time we’ve seen technology break through as a source of name inspiration,” said Murray. “Photo-sharing is a daily and emotional part of Millennials’ lives, and those two ingredients can trigger love for a name.” According to BabyCenter’s U.S. Mobile Mom 2015 Report, nearly 75 percent of moms use their mobile phone to share photos or videos of their children and nearly 30 percent are sharing photos daily.

Royalty
Parents have always had a taste for royal baby names, but George and Charlotte are a bit too subtle for today’s parents. If you want a baby name fit for your little queen or king, why not use Queen or King? In fact, the name King increased nearly 10 percent in popularity. But the biggest gains were seen for Royalty (up nearly 90 percent), Duchess (up 75 percent), Reign (up 54 percent), Sultan (up 26 percent), Princess (up 22 percent), and Tiara (up 20 percent).

This increase in royal names is likely fueled by celebrities such as Kourtney Kardashian, whose son is named Reign, and Chris Brown, whose daughter is named Royalty. New television shows such as The Royals and Reign may also be an influence.

The Empire Effect
The TV favorite Empire skyrocketed in popularity, and parents took note of more than the plot twists and hit songs. Names from the show’s family soared up the baby names chart including Dre (up 77 percent), Lyon (up 61 percent), and Hakeem (up 55 percent). And the name Lucious entered BabyCenter’s baby names database for the first time in three years.

Planets and Stars
There is a clear celestial theme to parents’ baby name choices this year. The names Venus (up 68 percent), Jupiter (up 50 percent), Sunny (up 43 percent for boys and 18 percent for girls), Gaia (meaning earth; up 32 percent), and Soleil (up 28 percent) are all on the rise. Additionally, Stella, meaning star, is among the Top 100 names of the year and jumped 11 spots (up 14 percent). There aren’t any babies named Mars … yet.

“In the sixties, celestial baby names had a hippy vibe, but today’s parents are more inspired by planetary science and space travel,” said Murray.

The Gender-Neutral Baby Name
Earlier this year, BabyCenter noticed that neutral names were on the rise and, with 2015 coming to end, we can firmly state that gender-neutral names (those that work well for boys and girls) are one of the biggest trends of the year.

For more information on BabyCenter’s Top 100 Baby Names of 2015, a complete list of trends, and online tools for finding your ideal baby name, please visit: https://www.babycenter.com/top-baby-names.

Information is also available on the top names of the year in Malaysia, Australia, Brasil, and the United Kingdom.

About BabyCenter® LLC
BabyCenter is the world’s partner in parenting. The #1 pregnancy and parenting digital destination, BabyCenter reaches more than 45 million moms and dads monthly in 10 languages and 13 markets from Canada to the Middle East to China. In the United States, 8 in 10 new and expectant moms online use BabyCenter each month.BabyCenter provides parents with trusted information, advice from peers, and support that’s Remarkably Right® at every stage of their child’s development. Products include websites, mobile apps, online communities, email series, social programs, print publications, and public health initiatives. BabyCenter also leverages its industry-leading audience engagement to provide unparalleled insights and innovative marketing solutions to the world’s top brands, retailers, and institutions. BabyCenter is also committed to improving maternal health globally, and, through its Mission Motherhood™ campaign, works closely with nonprofits, NGOs, and governments to help make motherhood safer for all women. BabyCenter LLC is a member of the Johnson & Johnson family of companies. Visit BabyCenter on Facebook, Pinterest, Instagram and LinkedIn or follow @BabyCenter and @MomInsights on Twitter.