Known for using the visual language of contemporary symbology, the New York-based McGinness is credited with elevating the status of the icon to fine art. His works have been exhibited in museums around the world. 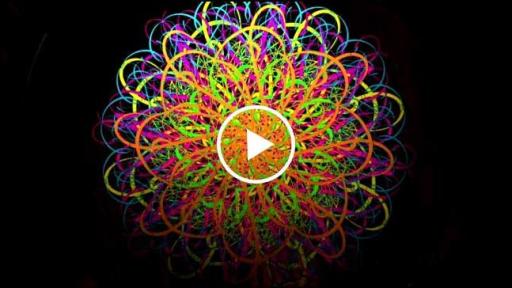 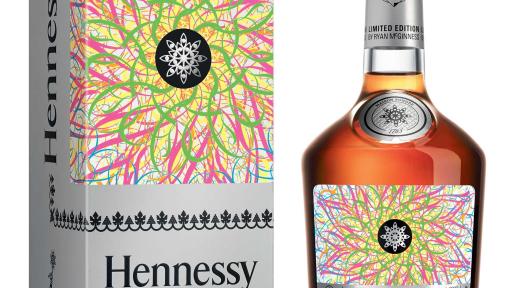 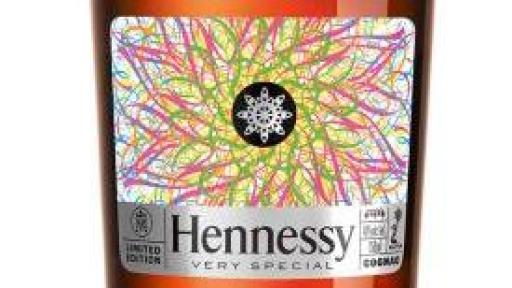 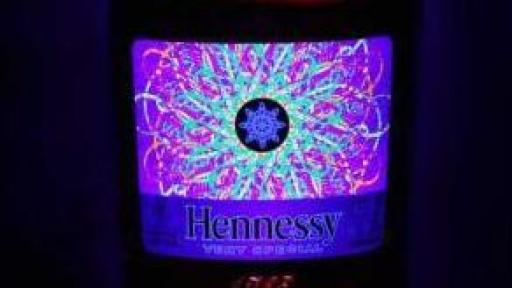 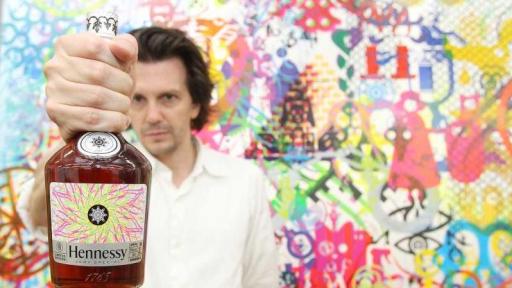 The new Hennessy V.S Limited Edition is the fifth in a series that has included critically acclaimed artists, KAWS, Futura, Os Gemêos and Shepard Fairey, the collaboration with McGinness is a perfect embodiment of Hennessy’s 250 years of dedication to the art of blending. McGinness acknowledges the strong similarities between his artistic approach and the creation of Hennessy Cognac: “My process of combining elements and compounds to form mixtures parallels Hennessy’s artful blending of eaux-de-vie to create Cognac. The shared approach to our crafts is part science and part art.”

The label on each individually numbered 750ml bottle features an innovative brand first: a radiating pattern in bright fluorescent colors that is illuminated when the bottle is placed under a black light. True to his style, McGinness also re-interpreted icons within Hennessy’s motif, including the brand’s coat of arms, and highlighted the bottle’s metadata – information found on the back of the label in fine print – through unique visual symbology.

“Ryan McGinness’ work reflects a fresh, energetic use of multiple elements- from colors to icons-to create designs of enduring impact. We are thrilled to be partnering with Ryan McGinness during our 250th Anniversary year.  This new Hennessy V.S Limited Edition bottle design embodies his passion and commitment to his craft, the same characteristics Hennessy has pursued since 1765,” said Rodney Williams, Executive Vice President of Spirits, Moët Hennessy USA.

In addition to the 750ml bottle (SRP: $32), a limited number of deluxe sets in commemorative gift boxes (SRP: $150) are available. The Hennessy V.S Limited Edition Deluxe set features two individually numbered 750ml bottles with different adaptations of the design by the artist in black and fluorescent colors on a black background. The Deluxe set also includes a keepsake booklet, providing a special inside look at the collaboration, and two exclusive artwork coasters.

Ryan McGinness will embark on a global tour with Hennessy beginning in August, with four US stops: New York, Miami, Philadelphia and Los Angeles.  For more information about the Hennessy V.S Limited Edition bottle by Ryan McGinness, visit Hennessy.com or follow Hennessy on Facebook (facebook.com/Hennessy), Twitter and Instagram (@HennessyUS, #ArtoftheChase).

About Hennessy
In 2015, the Maison Hennessy celebrates 250 years of an exceptional adventure that has linked the Hennessy and Fillioux families for seven generations and spanned five continents. It began in the French region of Cognac, the seat from which the Maison has constantly passed down the best the land has to give, from one generation to the next. Hennessy’s success and longevity are also the result of the values the Maison has upheld since its creation: unique savoir-faire, a constant quest for innovation, and an unwavering commitment to Creation, Excellence, Legacy, and Sustainable Development. Today, these qualities are the hallmark of a Maison – a crown jewel in the LVMH Group – that crafts the most iconic, prestigious Cognacs.

About Ryan McGinness
American artist Ryan McGinness is one of the most noted visual virtuosos of our time. Amidst a 20-plus year career of professional design work and exhibition, the Virginia-born artist has been heralded as “an art star” and “a leading pioneer of the new semiotics” by internationally regarded publications like The New York Times, Black Book and Vogue. By focusing heavily on his primal sensibilities for meaning, Ryan McGinness has created some of the most renowned symbol-driven vernacular in the contemporary art world. His works have graced prestigious galleries and museums in United States and around the world, including the Museum of Modern Art, Museum of Contemporary Art San Diego, the Virginia Museum of Fine Arts, MUSAC in Spain, and the Misumi Collection in Japan.