PR Newswire, NEW YORK – May 25, 2016 – Chopped is heading outdoors to beautiful Beringer Vineyards, located in Napa Valley, California, as sixteen grilling experts compete in Chopped Grill Masters Napa, premiering Tuesday, July 5th at 10pm ET/PT on Food Network. Hosted by Ted Allen, this special five-part themed tournament includes sixteen grilling professionals from around the country facing off for a chance at a $50,000 grand prize. Each episode includes four chefs competing over three rounds, with recurring Chopped and special guest judges deciding the fates for each pro. The winner from each heat wins $10,000 and a spot in the grand finale, to see who will walk away with $50,000 more.

“These talented Grill Masters are dropped into the beautiful wine country of Napa Valley, with their grills fired up to face some of the toughest mystery baskets yet,” said Didi O’Hearn, Senior Vice President Programming, Food Network & Cooking Channel. “With world-class judges watching their every move in this intense outdoor competition, these pros have to prove they have what it takes for a chance at $50,000.”

With access to an outdoor kitchen of ingredients and armed with charcoal and propane grills, as well as a smoker at each cooking station, the sixteen competitors must incorporate mandatory ingredients from the mystery baskets through three rounds - appetizer, entrée and dessert – showcasing their grilling skills to create unique and savory dishes. Over five episodes these grill pros must not only battle each other, but also take on the elements as they face the intensity of the heat from the grills and weather, along with some surprise appearances from bees that make cooking outside that much more challenging.

Get more from the Chopped Grill Masters Napa tournament at FoodNetwork.com/Chopped, where you’ll uncover photo and video highlights and hear from the winners. Join in on all the fun at #Chopped. 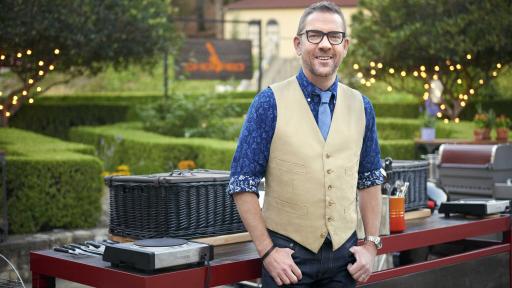 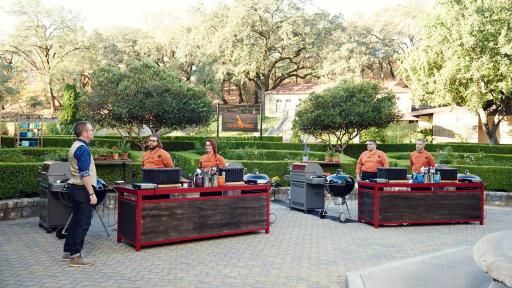 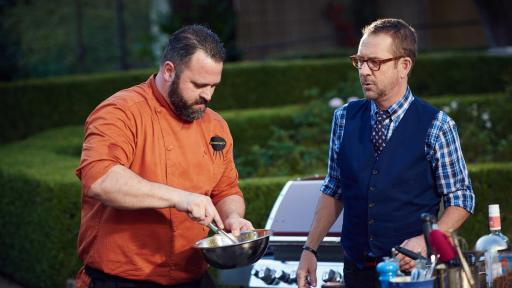 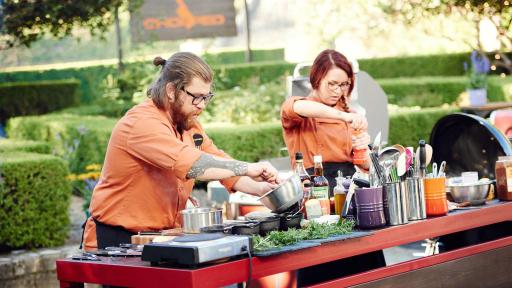 Host Ted Allen and the judges 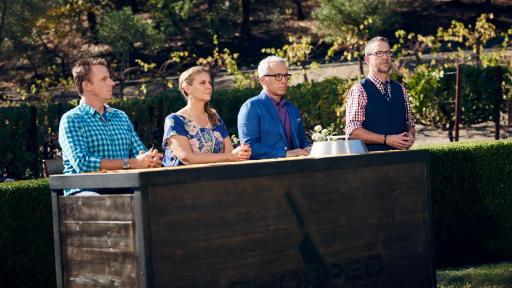 Premiering Tuesday, July 19th at 10:00pm ET/PT
“Chopped Grill Masters Napa: Part 3”
Another group of grillers gets a chance to compete in beautiful Napa Valley! The Grill Masters pound away in the first round, in an attempt to tenderize the seafood protein in the appetizer basket. Then in the second round the chefs get the gift of beef in the basket, but will they focus so much on the beautiful rib-eye that other mandatory ingredients are neglected? The final two chefs get some sweet surprises in the basket that they hope will be a good start for some yummy grilled desserts.
Host: Ted Allen
Judges: Amanda Freitag, John Koch, Marc Murphy
Competitors: Jason Bergeron (San Francisco, CA), Brian Bruns (Chicago, IL), Charles Grund (New York, NY), Daniel Gomez Sanchez (Napa, CA)

Premiering Tuesday, August 2nd at 10:00pm ET/PT - TOURNAMENT FINALE!
“Chopped Grill Masters Napa: Grand Finale”
Four champion Grill Masters are each $10,000 richer. Now they return to see who will claim $50,000 more! Half the basket is taken up with a porky surprise in the appetizer round. A serious display of grilling acrobatics follows in the entrée round, when the three remaining champs must figure out what to do with a surf-and-turf combo. Finally, bananas and wine are two of the tricky dessert ingredients that the last pair of chefs must grapple with, as they battle for the grand prize and the title of Chopped Grand Champion!
Host: Ted Allen
Judges: Amanda Freitag, Marc Murphy, Geoffrey Zakarian

FOOD NETWORK (www.foodnetwork.com) is a unique lifestyle network, website and magazine that connects viewers to the power and joy of food. The network strives to be viewers' best friend in food and is committed to leading by teaching, inspiring, empowering and entertaining through its talent and expertise. Food Network is distributed to more than 100 million U.S. households and up to 35 million unique web users monthly. Since launching in 2009, Food Network Magazine's rate base has grown 13 times and is now the third largest monthly magazine on the newsstand, with over 12.4 million readers. Headquartered in New York, Food Network has a growing international presence with programming in more than 150 countries, including 24-hour networks in the United Kingdom, Asia, and the Europe, Middle East and Africa (EMEA) region. Scripps Networks Interactive (NASDAQ: SNI), which also owns and operates Cooking Channel (www.cookingchanneltv.com), HGTV (www.hgtv.com), DIY Network (www.diynetwork.com), Travel Channel (www.travelchannel.com) and Great American Country (www.gactv.com), is the manager and general partner.