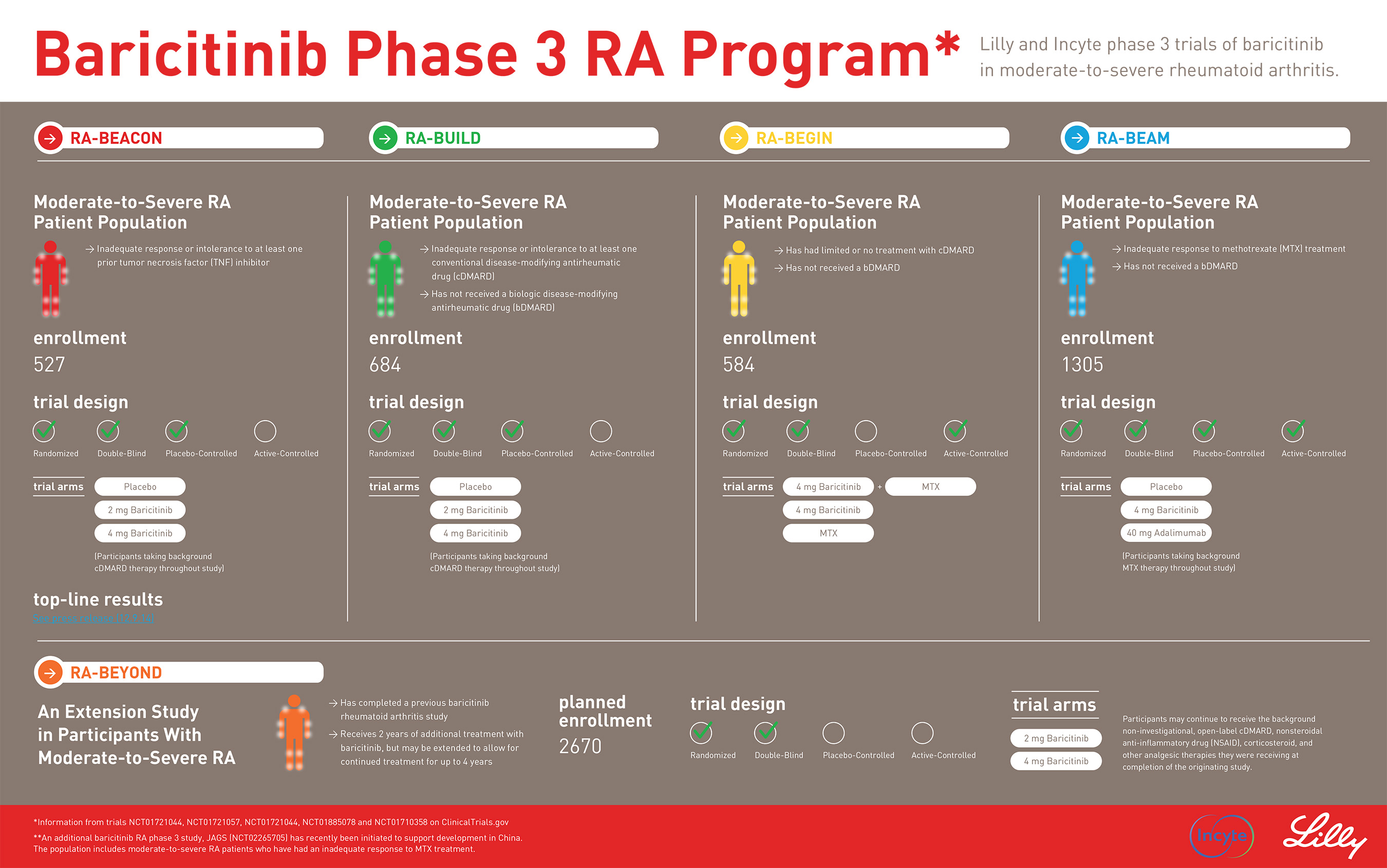 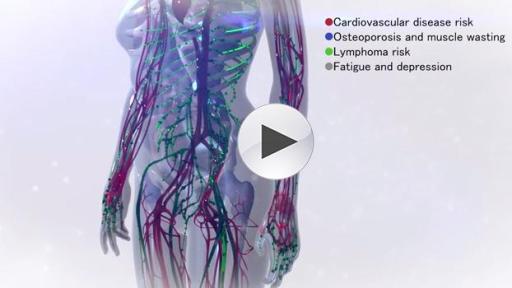 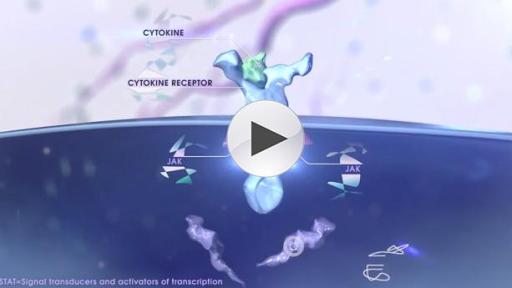 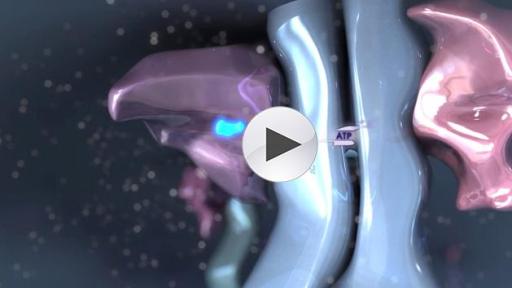 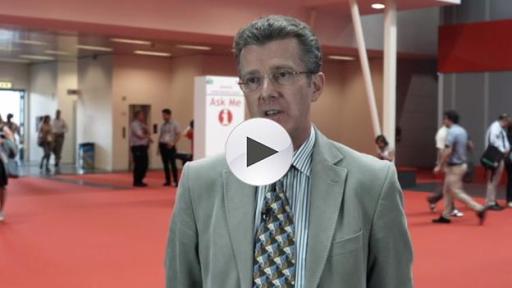 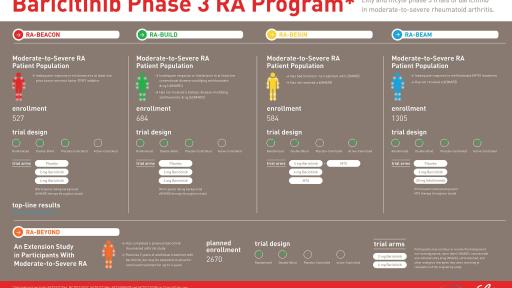 Improvements in mean number of swollen and tender joints and a reduction in pain were seen as early as one week for baricitinib versus placebo. At 52 weeks, baricitinib significantly improved all seven components of the ACR composite score compared to adalimumab, including reducing the number of tender and swollen joints, reducing patients’ pain and improving physical function. Patient-reported outcomes, including degree of tiredness and the severity and duration of morning joint stiffness, assessed daily for the first 12 weeks of the study, were all significantly improved with baricitinib compared to adalimumab.

At week 52, structural changes in the joints, as measured by changes in the modified Total Sharp Score, were significantly improved for both baricitinib and adalimumab compared with placebo. Lilly and Incyte previously announced that the study met its primary objective of demonstrating superiority for baricitinib versus placebo based on ACR20 response rate after 12 weeks of treatment.

“Rheumatoid arthritis is a lifelong condition, but it can be managed with treatment to help control symptoms, including joint inflammation and fatigue, to slow the progression of the disease and improve a patient’s quality of life,” said Peter Taylor, M.A., Ph.D., F.R.C.P., study author and Norman Collisson chair of Musculoskeletal Sciences in the Nuffield Department of Orthopaedics, Rheumatology and Musculoskeletal Sciences at the University of Oxford. “These findings suggest that the once-daily oral drug baricitinib, if approved, could provide another treatment option for those with insufficient response to current therapy.”

Serious adverse event rates were similar for baricitinib compared with placebo and lower for adalimumab, while serious infection rates were similar across groups.** There were no cases of gastrointestinal perforations. One event of tuberculosis was reported, in the adalimumab group. Four deaths occurred, one in the placebo arm, two in the baricitinib arm and one in the adalimumab arm. Two potential opportunistic infections occurred in the baricitinib arm; neither were considered serious. Temporary interruptions in treatment due to adverse events occurred with similar frequency across treatment groups.

Lilly and Incyte announced top-line results in December 2014 for the first phase 3 trial of baricitinib, RA-BEACON; in February 2015 for the second, RA-BUILD; in September 2015 for the third, RA-BEGIN; and in October 2015 for the fourth, RA-BEAM. The companies also will share detailed results from the RA-BEGIN study at the American College of Rheumatology/Association of Rheumatology Health Professionals annual meeting this year, and plan to submit additional detailed data from all four studies for presentation in scientific meetings and publication in peer-reviewed journals in 2016.

Detailed data from the long-term extension study, RA-BEYOND, also will be submitted for presentation in scientific meetings and publication in peer-reviewed journals in 2016.

About Baricitinib
Baricitinib is the only once-daily oral selective JAK1 and JAK2 inhibitor currently in late-stage clinical studies for inflammatory and autoimmune diseases. There are four known JAK enzymes: JAK1, JAK2, JAK3 and TYK2. JAK-dependent cytokines have been implicated in the pathogenesis of a number of inflammatory and autoimmune diseases, suggesting that JAK inhibitors may be useful for the treatment of a broad range of inflammatory conditions. Baricitinib demonstrates approximately 100-fold greater potency of inhibition against JAK1 and JAK2 than JAK 3 in kinase assays.

In December 2009, Lilly and Incyte announced an exclusive worldwide license and collaboration agreement for the development and commercialization of baricitinib and certain follow-on compounds for patients with inflammatory and autoimmune diseases. Baricitinib is currently in phase 3 clinical development for rheumatoid arthritis and phase 2 development for psoriasis, diabetic nephropathy and atopic dermatitis.

About Rheumatoid Arthritis
Rheumatoid arthritis is an autoimmune disease[i] characterized by inflammation and progressive destruction of joints.[ii] More than 23 million people worldwide suffer from RA.[iii] Approximately three times as many women as men have the disease. Patients and physicians indicate there remains an important opportunity to improve patient care. Current treatment of RA includes the use of non-steroidal anti-inflammatory drugs, oral disease-modifying anti-rheumatic drugs such as methotrexate, and injectable biological response modifiers that target selected mediators implicated in the pathogenesis of RA.[iv]

About Baricitinib Phase 3 Trials
Lilly and Incyte conducted four pivotal phase 3 clinical trials of baricitinib in patients with moderately-to-severely active rheumatoid arthritis to support regulatory submission in most countries. An additional phase 3 study was initiated to support clinical development in China. The clinical trial program includes a wide range of patients including those who are methotrexate-naïve, inadequate responders to methotrexate, inadequate responders to conventional disease-modifying anti-rheumatic drugs, or inadequate responders to TNF inhibitors. Patients completing any of the five phase 3 studies can enroll in a long-term extension study. For additional information on this clinical trial program, please visit www.clinicaltrials.gov.

About Incyte
Incyte Corporation is a Wilmington, Delaware-based biopharmaceutical company focused on the discovery, development and commercialization of proprietary therapeutics for oncology and inflammation. For additional information on Incyte, please visit the Company’s web site at www.incyte.com.

About Eli Lilly and Company
Lilly is a global healthcare leader that unites caring with discovery to make life better for people around the world. We were founded more than a century ago by a man committed to creating high-quality medicines that meet real needs, and today we remain true to that mission in all our work. Across the globe, Lilly employees work to discover and bring life-changing medicines to those who need them, improve the understanding and management of disease, and give back to communities through philanthropy and volunteerism. To learn more about Lilly, please visit us at www.lilly.com and newsroom.lilly.com/social-channels.

**Safety data are reported for patients receiving initial assigned treatment and prior to any rescue or switching.

This press release contains forward-looking statements (as that term is defined in the Private Securities Litigation Reform Act of 1995) about baricitinib as a potential treatment for patients with rheumatoid arthritis and reflects Lilly and Incyte's current beliefs. However, as with any pharmaceutical product, there are substantial risks and uncertainties in the process of development and commercialization. There is no guarantee that future study results will be consistent with study findings to-date, or that baricitinib will receive regulatory approvals or prove to be commercially successful. For further discussion of these and other risks and uncertainties, see Lilly’s and Incyte’s Form 10-K and 10-Qfilings with the United States Securities and Exchange Commission. Except as required by law, Lilly and Incyte undertake no duty to update forward-looking statements to reflect events after the date of this release.