Resort to Showcase Works by Local and International Artists including Margaret Boozer, John Safer, Alice Aycock and Sam Gilliam, Among Others

“An unparalleled art program that exemplifies the diversity of the region and captures the spirit of MGM National Harbor, while also being accessible and engaging for everyone, has been a part of our vision from the very beginning,” said Jim Murren, Chairman and CEO of MGM Resorts International. “The Heritage Collection will celebrate and seamlessly blend the creative brilliance, beauty and inspiration of local and international artists. That juxtaposition of global and local is a hallmark of MGM Resorts as a leading creator of entertainment destinations.”

From the moment guests arrive at MGM National Harbor, situated on the shores of the Potomac River in Prince George’s County, Maryland, they will encounter a sensory experience unlike any other. From the three, 60-foot-tall stainless steel figures of the Unity sculpture greeting visitors at the hotel’s porte cochere, to the whimsical seven-foot-tall Cinderella Shoe in the retail promenade, guests will be immersed in a storyline unique to the property. Every aspect of the art - from the piece to the location to the orientation - has been carefully selected and strategically designed to complement the space. The artwork will evoke a sense of wonder and delight as guests wander through the resort, encountering works that are diverse and approachable, rivaling the quality and caliber of masterpieces displayed in public collections throughout the Capital Region.

The MGM National Harbor Heritage Collection will feature pieces from more than a dozen artists working with a variety of mediums including aluminum, clay, stainless steel, bronze, watercolors, photography and more. Objects will range from large-scale sculptures and paintings to photography and LED light boxes, creating a rich visual experience. Some works, like those by Madelyn Keesing and Sam Gilliam, are abstract pieces which echo the historical visual art movement of the Washington Color School that originated in Washington, D.C. Commissioned pieces by emerging artists reflect the rich heritage of Prince George’s County and the greater Mid-Atlantic region, such as the landscape composition fashioned from construction site clay by Margaret Boozer of Red Dirt Studio.

Murren added, “Art is one of the cornerstones of the sensory experience at our resorts, creating environments that are interesting, exciting and distinct. The experience at MGM National Harbor will be exceptional, offering the community and visitors from around the world access to a high-quality special collection.”

Dwyer is an avant-garde artist in every sense of the term, and for this reason, his artwork is widely sought after by galleries and collectors. The unexpected imagery found in Dwyer’s elegant, almost classical female forms provoke endless interpretation and exploration.

MGM National Harbor is in collaboration with the Prince George’s County Arts and Humanities Council, an independent non-profit organization designated by the Prince George’s County government to coordinate financial support and advocacy for the arts and humanities through grants, artistic programs and creative partnerships among business, education, government and residents. For the Heritage Collection, MGM National Harbor has also partnered with Atlantic Arts, a Maryland-based art procurement company, and RareCulture, a women-owned establishment specializing in curating fine art collections.

About MGM National Harbor
The newest addition to the MGM Resorts International (NYSE:MGM) portfolio, MGM National Harbor’s unrivaled setting offers stunning panoramic views of the eastern shore of the Potomac River in Maryland. The $1.3 billion resort sits a short distance from Washington, D.C. to the north and historic sites, including George Washington’s Mount Vernon estate across the river in Virginia. The 24-story, 308-room resort will feature premier amenities and experiences for locals as well as visitors from around the world including a dynamic casino with over 125,000 square feet of space that includes slots, table games and poker; a world-class spa and salon; an entertainment theater with flexible seating for up to 3,000; high-end branded retail; 27,000 square feet of meeting space; and restaurants from renowned local, national and international chefs. MGM National Harbor is slated to open in the fourth quarter of 2016.

About MGM Resorts International
MGM Resorts International (NYSE: MGM) is one of the world’s leading global hospitality companies, operating a portfolio of destination resort brands including Bellagio, MGM Grand, Mandalay Bay and The Mirage. The Company is in the process of developing MGM National Harbor in Maryland and MGM Springfield in Massachusetts. The Company also owns 51 percent of MGM China Holdings Limited, which owns the MGM Macau resort and casino and is developing a gaming resort in Cotai, and 50 percent of CityCenter in Las Vegas, which features ARIA Resort & Casino. For more information about MGM Resorts International, visit the Company’s website at mgmresorts.com.

Forward-Looking Statements
Statements in this release that are not historical facts are forward-looking statements within the meaning of the Private Securities Litigation Reform Act of 1995. MGM National Harbor has based these statements on management’s current expectations and assumptions and not on historical facts. Examples of these statements include statements regarding the contemplated design of the guest rooms and amenities at MGM National Harbor and the expected opening date of the casino resort. A number of important factors could cause actual results to differ materially from those indicated in such forward-looking statements, including effects of economic and market conditions, competition with other destination travel locations throughout the United States and the world, and the design, timing and costs of the projects and risks relating to permits, licenses, financings, approvals and other contingencies and additional risks and uncertainties described in the MGM Resorts International Form 10-K, Form 10-Q and Form 8-K reports (including all amendments to those reports) filed with the Securities and Exchange Commission. In providing forward-looking statements, MGM National Harbor is not undertaking any duty or obligation to update these statements publicly as a result of new information, future events or otherwise, except as required by law. 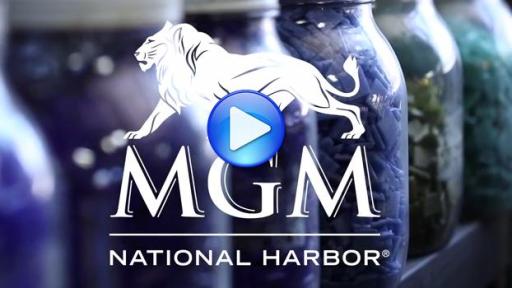