PR Newswire, ADA, Mich. (November 14, 2016)
Americans are becoming increasingly bullish toward business ownership– with a majority citing “self-fulfillment,” “independence from an employer,” and “an opportunity to realize one’s own ideas,” as the top factors they are drawn to when starting their own businesses.

The seventh annual Amway Global Entrepreneurship Report (AGER), published today, measures the public pulse of self-employment around the world. The 2016 study finds 84 percent of U.S. respondents have a positive attitude toward entrepreneurship compared to the global average of 77 percent. 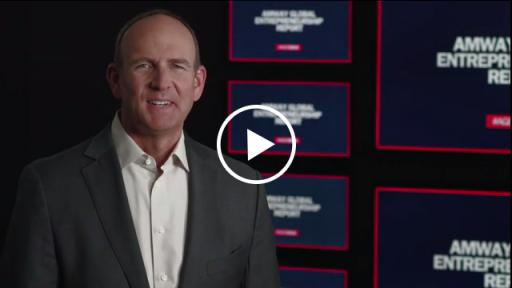 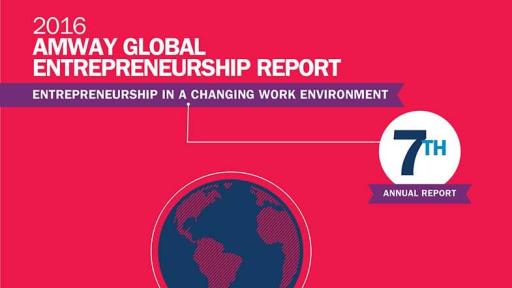 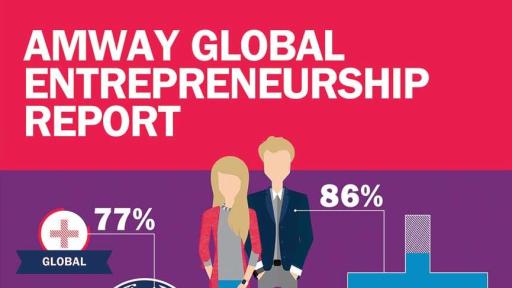 The continued optimism from 2015 is dependent upon age, gender and education levels and may explain the increasing importance of global trends like the gig economy – also known as the sharing economy, on-demand economy, peer-to-peer economy, freelance nation, among others. By any name, the trend of individuals seeking independence from an employer with greater flexibility is on the rise. The 2016 AGER results support this trend, with 40 percent of U.S. respondents and 39 percent of global respondents seeing self-employment more likely in five years than today. Additionally, 66 percent of U.S. respondents and 56 percent of global respondents feel comfortable searching for and acquiring customers – a critical element of self-employment.

84% of Americans are positive toward #entrepreneurship, 7% more than the global avg #AGER2016 @AmwayUS Tweet

“This year’s report reaffirms the growing positivity we’ve seen toward entrepreneurship in the U.S.,” said Dr. David B. Audretsch, professor and director of the Institute for Development Strategies at the Indiana University School of Public and Environmental Affairs. “At seven percentage points higher than the global average, it is clear that positive attitudes toward entrepreneurship in America show no signs of receding.”

“American optimism toward entrepreneurship is gaining significant strength in the U.S. and is expected to continue in 2017,” said Jim Ayres, Managing Director, Amway North America. “This momentum isn’t surprising as the U.S. is a hospitable environment for cultivating entrepreneurs. This year’s report mirrors what we see on a day-to-day basis as an increasing number of Americans are placing a higher value on entrepreneurship and expressing a stronger desire to own and operate their own businesses.”

While the future of work appears to be shifting more toward entrepreneurship than ever before, there are noticeable trends across age, education levels and gender.

Millennials are Most Optimistic about Business Ownership.
Younger generations are more enthused that entrepreneurship in America is on the rise compared to older generations. U.S. respondents under the age of 35 years show a significantly higher desire to starting their own business (70 percent) compared to those over the age of 50 (52 percent). Interestingly, confidence in one’s own capabilities of starting a business peaks (69 percent) for respondents between the ages of 35 and 49 years. Respondents under 35 years are also more convinced that self-employment will be more prevalent in the future (45 percent), compared to those who are 35 to 49 years and those over the age of 50.

Education Matters – College Graduates are More Optimistic Toward Entrepreneurship.
Education appears to have an influence on entrepreneurial potential among U.S. respondents. University graduates (92 percent) are more positive toward entrepreneurship than those without a degree (82 percent). Degreed respondents (42 percent) also believe they are more likely to be self-employed in the next five years than those without a degree (39 percent). Similarly, both groups identically ranked their top reasons for starting a business (self-fulfillment, independence and second income prospects). Furthermore, education levels had no influence on confidence in acquiring customers as university graduates and non-graduates shared similar opinions (66 percent).

Amway Entrepreneurial Spirit Index
The AGER also once again features the Amway Entrepreneurial Spirit Index (AESI). Introduced in 2015, the AESI builds on the theory of planned behavior and measures three dimensions that influence a person’s intention to start a business: desirability, feasibility and stability against social pressure. This year, the U.S. AESI score was 56, slightly higher than last year’s score of 53 and this year’s global score of 50. Additionally:

Full results and more information about AGER can be found here.

ABOUT THE AMWAY GLOBAL ENTREPRENEURSHIP REPORT (AGER)
The first iteration of AGER launched in 2010 as the Amway European Entrepreneurship Report, then expanded worldwide with the 2013 AGER, encompassing 24 countries. This year’s report spans 45 countries, with in-person and telephone interviews conducted with more than 50,000 men and women aged 14-99.

The 2016 AGER was conducted by Amway, in partnership with Prof. Dr. Isabell M. Welpe from the Chair of Strategy and Organization of the School of Management, Technical University of Munich, Germany. Fieldwork was completed by the Gesellschaft fuer Konsumforschung, Nuremberg, from April through June. Results are shared with the scientific community, including the 45 AGER academic advisors and all interested think tanks and academic and public institutions.

ABOUT AMWAY
Amway is a $9.5 billion direct selling business based in Ada, Michigan, USA. Top-selling brands for Amway are Nutrilite™ vitamin, mineral and dietary supplements, Artistry™ skincare and color cosmetics and eSpring™ water treatment systems – all sold exclusively by Amway Business Owners. Global sales in 2015 made Amway the No. 1 direct selling business in the world, according to the Direct Selling News 2016 Global 100. The company’s annual sales figure includes revenue from direct selling operations and other business holdings.