PR Newswire, (Rockville, MD - May 3, 2016)
Recent studies have underscored the overuse of technology in U.S. households. Speech and hearing experts from the American Speech-Language-Hearing Association (ASHA) who were recently polled warn that current tech habits, if left unchecked, could produce a "time bomb" that manifests in the form of diminished communication abilities and skills. This “time bomb” encompasses speech and language development, which is dependent on adequate time for verbal exchange such as listening, talking, reading, and interacting with parents—interactions that technology cannot duplicate—and hearing loss, which impedes communication, academic and social success.

New polling from ASHA finds that informing parents and teens of the potential risks that overuse of personal technology devices poses to speech and language development as well as to hearing health prompts an overwhelming willingness to change usage habits. 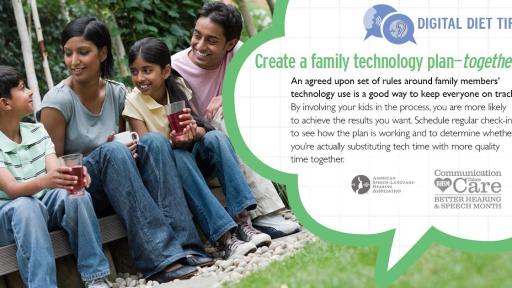 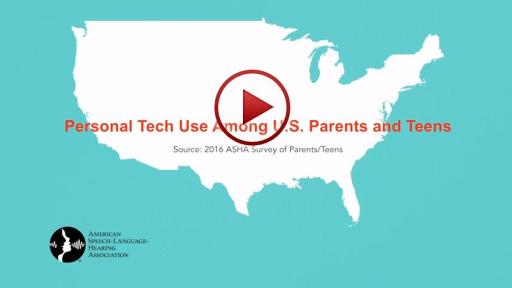 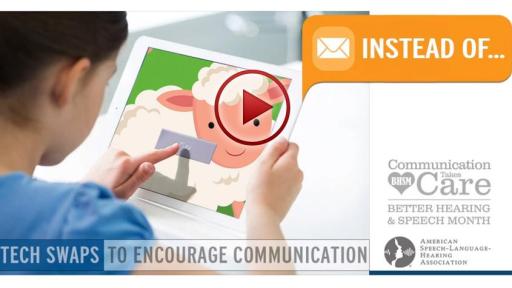 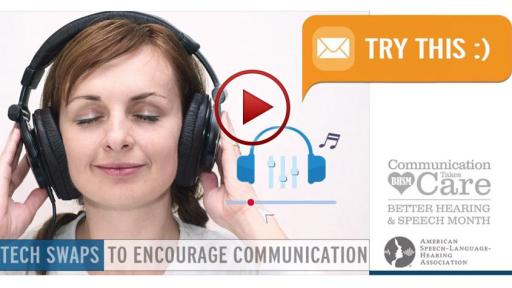 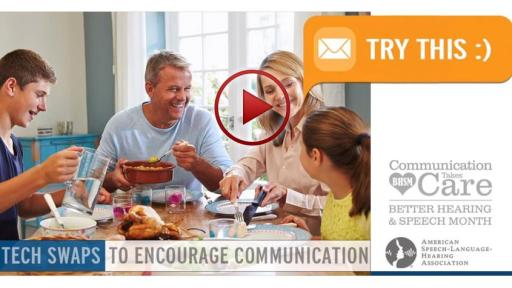 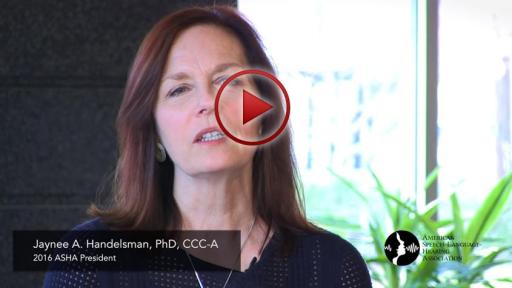 The polling, conducted in recognition of Better Hearing & Speech Month, found that once informed of communication health risks—the potential for impaired speech and language development and the ability to hear, for example—more than 79% of parents said that they are willing to set stronger usage parameters at home and 90% are more likely to change their own personal tech device habits to be a better tech role model for their families.

“The strong interest in adopting safer behaviors is a refreshing and hopeful sign,” ASHA 2016 President Jaynee Handelsman, PhD, CCC-A, says. “It suggests that despite our society’s dependence on technology, parents and teens are willing to change their habits in meaningful ways once they learn that overuse comes with risks. It’s encouraging that millennial parents, who have grown up in the digital age, according to our polling show the most willingness to change.”

The polling shows that both parents and teens, on average, each use tech not only more than 5 hours daily but also when communication abilities and skills are typically developed, including conversations between parents and children as well as family dinners and leisure activities.

Majorities of parents at least sometimes check their phones at the dinner table (50%) and use a device during leisure time with their children (67%). Additionally, 55% of teens reported having no rules limiting tech usage in their homes (although parents disagree: more than two-thirds of parents report implementing at least general guidelines on their children’s use of technology).

The polling also indicates that teens and parents have come to depend on using these devices to solve boredom, get time to themselves, and even communicate with one another rather than talking face to face. For example, more than half of teens (52%) reported often or sometimes using texting or instant messaging to communicate with parents when inside the home.

ASHA experts are urging parents and teens to adopt a new “Digital Diet” to help moderate tech use in favor of more conversation and human interaction. Tips include creating a family technology plan, keeping a log, or sponsoring tech-free nights and events.

“We encourage parents to consult the Digital Diet we have developed for guidance making safer tech usage a reality at home,” Handelsman says. “The steps involved are simple and easy, but they can make a big difference preserving and protecting communication health.”

Handelsman notes that the Digital Diet can help build on another bright spot from the polling: 93% of teens whose parents have set tech usage rules at home considered rules fair. Similarly, 96% of parents who have set usage rules said that they were successful.

ASHA encourages the public to visit www.asha.org/ProFind to find a certified audiologist and speech-language pathologist in their local area if they have communication health concerns.

About the American Speech-Language-Hearing Association (ASHA)
ASHA is the national professional, scientific, and credentialing association for 186,000 members and affiliates who are audiologists; speech-language pathologists; speech, language, and hearing scientists; audiology and speech-language pathology support personnel; and students. Audiologists specialize in preventing and assessing hearing and balance disorders as well as providing audiologic treatment, including hearing aids. Speech-language pathologists identify, assess, and treat speech and language problems, including swallowing disorders. www.asha.org/