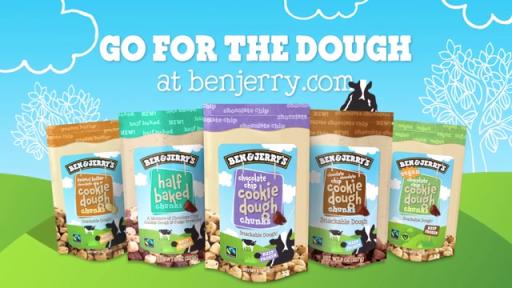 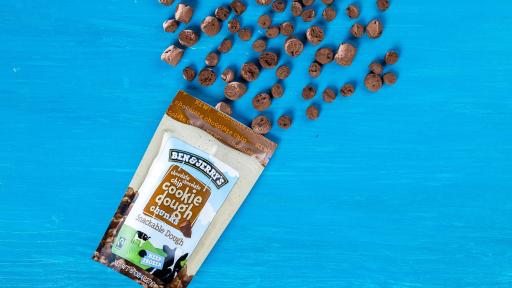 Half Baked Chunks is a mixture of chocolate chip cookie dough & fudge brownies. 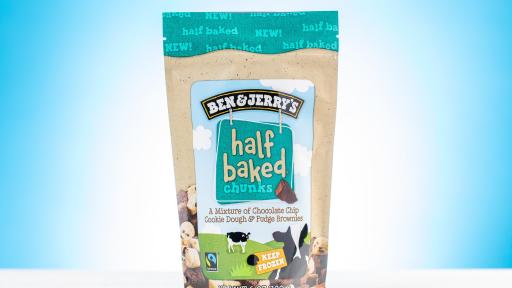 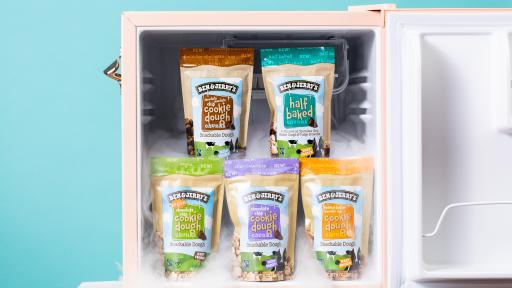 Ben & Jerry’s are the dough-riginals when it comes to adding cookie dough to ice cream. Now available: Chocolate Chocolate Chip Cookie Dough and Half Baked Chunks. 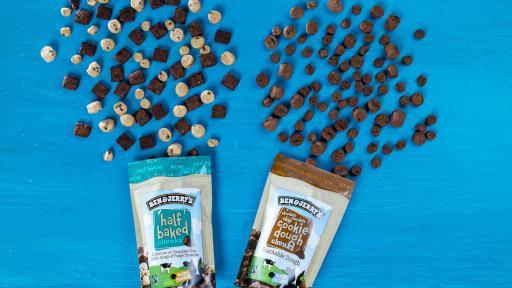 Ben & Jerry’s has added two new flavors to their collection of cookie dough chunks. Drop your spoon and dig in!

Put down your spoon and dig in! Ben & Jerry’s is serving up just the chunks.  Tweet

Raw cookie dough has become a global phenomenon, but Ben & Jerry’s are the dough-riginals. In 1984 they were the first national ice cream company to drop big chunks of chocolate chip cookie dough into a batch of ice cream. Today the company announced two new flavors of cookie dough chunks:

“We weren’t entirely surprised when cookie dough chunks flew off the shelf,” said Jody Eley, the innovation manager in charge of the launch. “Cookie Dough is our #1 fan favorite around the world, and we know our fans often dig around the ice cream to get to the chunks. We just made it a little easier by putting them in a bag.” Eley says dough lovers sprinkle the chunks on their sundae, snack on them mid-afternoon, or eat them right out of the bag on the way home from the supermarket. The dough is safe to eat because it’s made with pasteurized eggs and heat-treated flour.

Cookie Dough Chunks are available in supermarkets and participating Scoop Shops nationwide for a suggested retail price of $3.99-5.49. Learn more or find a store near you at Ben & Jerry’s Flavor Locator.

About Ben & Jerry's
As an aspiring social justice company, Ben & Jerry's believes in a greater calling than simply making a profit for selling its goods. The company produces a wide variety of super-premium ice cream, yogurt and sorbet using high-quality ingredients. Ben & Jerry's incorporates its vision of Linked Prosperity into its business practices in a number of ways including a focus on values-led sourcing. In 2015 the company completed its transition to using entirely non-GMO (genetically modified organisms) ingredients by source as well as to fully source Fairtrade-certified ingredients wherever possible, which benefits farmers in developing countries. Ben & Jerry's products are distributed in 35 countries in supermarkets, grocery stores, convenience stores, franchise Ben & Jerry's Scoop Shops, restaurants and other venues. Ben & Jerry's, a Vermont corporation and wholly owned subsidiary of Unilever, operates its business on a three-part Mission Statement emphasizing product quality, economic reward and a commitment to the community. Ben & Jerry's became a certified B Corp in 2012. The Ben & Jerry's Foundation's employee-led grant programs totaled $3MM in 2019 to support grassroots organizing for social and environmental justice around the country.