Let Nature Back In 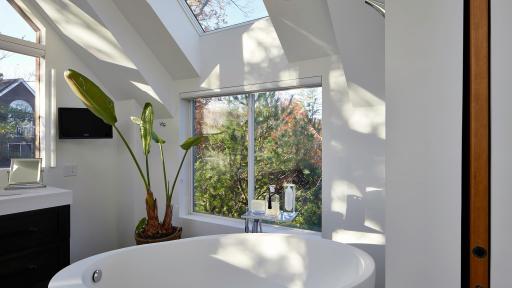 FORT MILL, SC, June 5, 2019 – VELUX Skylights, the global leader in skylights and roof windows, today released findings that depict modern society’s vanishing relationship with the natural environment. The survey included over 16,853 adults across 15 countries, including the US, Germany, France, Denmark, Spain, Poland and the UK. In the US, 63% of participants said they on average only spend one hour or less a day in nature, but 88% agreed they would like to spend more time. In addition, 71% of the US participants said they believe nature, daylight and fresh air have a positive impact on stress levels while 69% agreed that those factors have a positive impact on mental well-being.

A separate study, commissioned by the VELUX Group and published by RAND Europe, finds emerging evidence for a positive association between nature and mental health. The independent scoping study reviewed the recent academic literature on the effect of exposure to nature on mental health.

“Exposure to nature such as trees, plants and views of open spaces, has been found to improve the cognitive ability to focus and read social cues,” says Arie Greenleaf, Associate Professor of Counseling at Seattle University. “Even ADHD symptoms in children are mitigated by views of and interactions with nature in a host of different ways. Worker productivity, how people feel about the work they do and the level of engagement, improves with a view of nature.”

Globally, the survey results showed that despite 90% of respondents stating that they would enjoy spending more time in nature, like their American counterparts over half (52%) said that in a week they on average only spend one hour or less a day in it, and 85% believed that they typically spent more time in nature as a child than children do today, indicating that this is a mounting global problem.

“With work and family responsibilities we can’t always fit spending time outside into our busy schedules, effectively making us the indoor generation,” said Peter Foldbjerg, Head of Daylight, Energy and Indoor Climate, from The VELUX Group. “One thing we can do is improve how our homes connect to nature: From houseplants and nature-inspired art to skylights and screened porches, there are a wide variety of options for creating nature connections in the place we spend most of our time – our homes.”

The RAND Europe scoping review identified several qualitative studies that find a positive association between people’s exposure to nature and their mental health, such as their perceived stress state. Restorative environment research studies have also documented how being in nature or exposed to nature can increase wellbeing.

“Nature can reduce risk of illnesses involving chronic stress, as well as promote a range of intermediate outcomes such as subjective wellbeing,” said Professor of environmental psychology Terry Hartig, Uppsala University, Institute for Housing and Urban Research, in Sweden.

The survey found that globally 77% think they should make changes to their daily routine and lifestyle to enable them to spend more time in nature. Canada is the nation in which percentages are the highest of people spending one hour or less a day in nature (69% compared to a 52% global average).

This new population survey echoes VELUX’s new global campaign, ‘Let nature back in,’ which highlights the risks of a nature deficient society. It explores the effects that indoor-based lifestyles can have on our overall wellbeing amid a shift to an increasingly urbanized population, illustrated in a film directed by Martin de Thurah, showing how children from previous generations played outdoors, to the children of today who are far more likely to stay inside in front of various screens.

To watch the film, go to https://www.youtube.com/watch?v=0Yv8gcFaJL0. Complete US survey data and the full RAND Europe study available on request.

About VELUX
VELUX is the world leader in skylights and roof windows and is one of the strongest brands in the global building materials sector. VELUX America products are available nationwide through home centers, building material suppliers, lumberyards and independent door, window or roofing retailers. Consumers can locate local suppliers and installers and access information on skylight selection and the benefits of bringing more natural light and fresh air into the home by visiting https://whyskylights.com/outside-in.

RAND Europe is a not-for-profit research organization that helps to improve policy and decision making through research and analysis. Their findings and recommendations are based on rigorously peer-reviewed research and analysis, aiming to benefit the public interest through the impact and wide dissemination of their work.