In the ad, Chris Evans is outside a coffee shop in the heart of Boston and notices someone trying to park in a very narrow spot. Comedienne Rachel Dratch walks up and they discuss, in a way only true Bostonians can, how there is no way a car can get in that spot.

The first car drives away and suddenly an all-new 2020 Sonata appears. The window rolls down revealing John Krasinski at the wheel. He sees Chris and Rachel and in perfect Boston accents they talk about this impossible park job. John gets out of the Sonata and showcases Hyundai’s “Smaht Pahk” technology that remotely moves the vehicle into and out of the tight parking spot with ease. While he is commenting on all of the iconic Boston places he’s parked the car, David Ortiz, who is in a nearby building, unexpectedly opens a window and shouts down at the group to ask what is going on, before also finding out about Hyundai’s new remote parking technology. 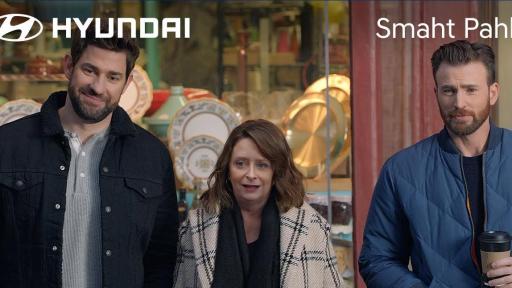 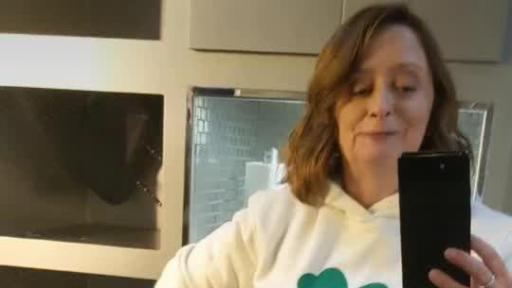 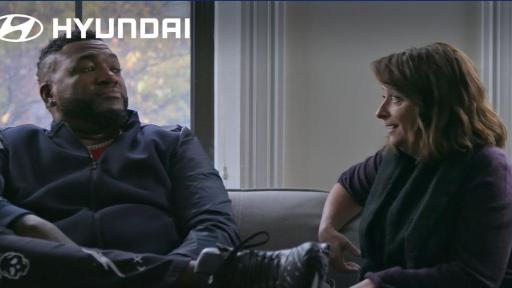 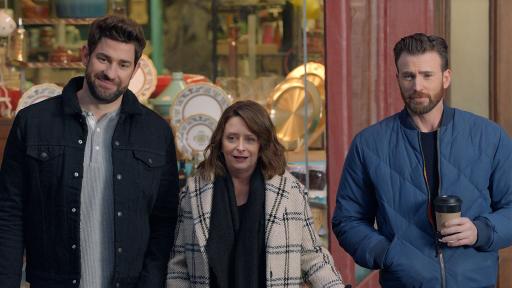 The commercial also includes several Boston “Easter eggs” for viewers paying close attention, including the well-known Boston song “Dirty Water” by the Standells that plays towards the end of the spot.

“Using the Boston accent as our creative hook was something that quickly became a favorite during the creative development process,” said Angela Zepeda, CMO, Hyundai Motor America. “Remote Smart Parking Assist was difficult to say and remember, but a truncated ‘Smaht Pahk’ caught on when one of our creatives said it in a Boston accent. We thought it was a fun, charming and memorable way to tell people about this incredible new technology using one of America’s most-recognized and beloved regional accents.”

“It’s a common construct for Big Game commercials to avoid the product for 45 seconds, then slip in a mention,” said Barney Goldberg, INNOCEAN USA’s executive creative director. “We took the opposite approach and feel the ad is stronger—and funnier—for it.”

Hyundai Goes Boston
Hyundai’s amplification strategy began earlier this month when it released a teaser, Dialect Coach, showing Rachel Dratch helping David Ortiz prepare his Boston accent for the spot. Today, Hyundai launched the first automotive brand campaign on TikTok, where Rachel Dratch completes the #onedayafterwatching challenge. This popular TikTok challenge is where people show how watching a TV show, movie or being in a location over time slowly changes who they are. Rachel was able to complete the challenge because she had just spent a lot of time reconnecting with her Boston roots while filming the commercial.

As part of the social media campaign in support of this year’s Big Game ad, Hyundai and INNOCEAN have invited two well-known Boston-area comedians to help take on Hyundai’s Twitter duties during the game. Robert Kelly (@RobertKelly) and Tony Viveiros (@TonyVComic) will be responding in real time to fans and viewers, plus adding their own commentary on the game and other commercials. The pair will also host four segments of The Hyundai Quartertime Show that will be filmed, edited and published online throughout the game. Kelly has appeared in the movie Trainwreck and many television shows, and often performs at the Comedy Cellar in Manhattan. He currently hosts his podcast, “You know what, dude?” Viveiros has been performing for over 35 years, appearing on Late Night with Conan O’Brien, Denis Leary Comics Come Home, and in films The Town and The Heat.

Hyundai is also taking the campaign directly to the city of Boston with a letter of appreciation running in the Boston Globe, local radio buys voiced by Rachel Dratch, billboard advertising and targeted social media activities showing Hyundai’s love for Boston’s quirks.

Hyundai Sonata and Remote Smart Parking Assist
Sonata, the vehicle highlighted in the ad, is Hyundai’s longest-standing and most successful model, and the all-new 2020 version offers a bold, distinctive design, and numerous convenience and safety technologies. The car uses an extensive application of advanced technologies to boost comfort, convenience and active safety, including the class-exclusive Remote Smart Parking Assist. This feature helps maneuver the car directly into or out of parking spaces, boosting convenience for customers. Before a driver attempts to load or unload passengers or luggage, the remote parking function can prove particularly useful, bringing the vehicle directly into and out of a tight space. The driver simply uses the key fob to drive the car forward or backward into or out of a parking space, without needing to be physically inside the vehicle.

Hyundai’s 2020 Big Game marketing campaign was developed and is being executed by its agency of record, INNOCEAN USA, while its media agency, Canvas, coordinated the media buy. The Big Game will be played on February 2, 2020, in Miami and will be televised on FOX.

Hyundai Motor America
At Hyundai Motor America, we believe everyone deserves better. From the way we design and build our cars to the way we treat the people who drive them, making things better is at the heart of everything we do. Hyundai’s technology-rich product lineup of cars, SUVs and alternative-powered electric and fuel cell vehicles is backed by Hyundai Assurance—our promise to create a better experience for customers. Hyundai vehicles are sold and serviced through more than 830 dealerships nationwide and nearly half of those sold in the U.S. are built at Hyundai Motor Manufacturing Alabama. Hyundai Motor America is headquartered in Fountain Valley, California, and is a subsidiary of Hyundai Motor Company of Korea.