Check Out the Toys!

The Latest Toys Revealed At The American International Toy Fair

This year marks the 117th American International Toy Fair. It is the largest toy trade show in the Western Hemisphere, the third largest in the world and a critical time for the approximately $22 Billion U.S. traditional toy industry. More than 1,600 manufacturers, distributors, importers and sales agents from 30 countries will be showing more than 100,000 toys.

The show is closed to consumers, but Chris Byrne The “Toy Guy” provides an exclusive inside look from the show floor.

Farm-to-Table Play Kitchen/KidKraft
Inspire delicious fun for little foodies with the trendsetting KidKraft Farm to Table Play Kitchen with EZ Kraft Assembly™! Kids can show off their green thumbs as they tend to the adorable window box with planted carrots and purple onions that can be pulled and chopped on the cutting board with the wooden knife. With convenient hanging hooks to hold the included spatula, pot and pan and a large chalkboard to feature the daily specials, this kitchen whips up fun and cooks up memories for little chefs. Retails at $199.99

Fisher-Price Imaginext DC Super Friends Super Surround Batcave/Mattel
Introducing the largest, most interactive Batcave ever within the world of Imaginext. This Batcave is surrounded by multi-color LEDs, content and an extreme amount of play space to keep them busy for hours. This set comes with 5 exclusive figures, but kids can bring their vehicles and figures to the Immersive Batcave. Retails at $149.99 and available Fall 2020

Fly Wheels/Jakks Pacific
Fly Wheels™ are one of the fastest wheels around! Rip them up to 200 scale MPH! Hit the Extreme Stunt Ramp and jump up to 30 feet in the air! Retails at $9.99 each for a 2 Pack & Stunt Ramp

Monopoly Speed Board Game/Hasbro
Not a lot of time? No problem! The MONOPOLY SPEED board game can be played in under 10 minutes! Everyone rolls and buys at once so players don't have to wait for their turn. During 4 rounds, players race against the timer to buy, trade, and sell properties faster than ever. The MONOPOLY SPEED board game is great choice for family game night, parties with friends, and a quick break from the every day. Retails at $19.99

PLAYMOBIL Scooby-Doo! Mystery Machine/PLAYMOBIL
Time to solve some mysteries with the members of Mystery, Inc. in the SCOOBY-DOO! Mystery Machine™! This psychedelic vehicle always has everything you need for your ghost-hunting adventures. Retails at $44.99 and sold at Walmart exclusive until May 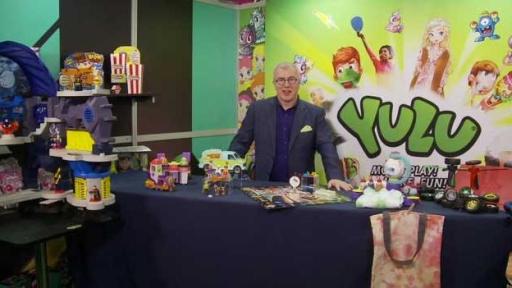