When the park opens this summer, Batman fans will have the chance to walk the streets of Gotham City alongside notorious Super-Villains such as The Joker, The Riddler, Scarecrow, Catwoman and Harley Quinn. The immersive land will feature interactive experiences, including four all-new state-of-the-art rides and attractions, authentically themed restaurants and memorabilia shops — all inspired by the characters and stories from DC’s famed comic books and movies.

Mark Gsellman, Park General Manager, stated: “Home to fan-favorite DC Super Heroes, we’re very excited for our guests to experience the immersive environment of Gotham City, where Batman will emerge from the shadows to help fight crime and stop the city’s Super-Villains. From heart-pounding flight simulators to authentic landmarks, this land is sure to leave a lasting impression on guests of all ages.”

In Gotham City, guests will be able to climb aboard a one-of-a-kind robotically controlled flying Batwing vehicle to help the Caped Crusader bring crime to its knees in Batman: Knight Flight — a highly exhilarating dark ride, providing drops, climbs, spins, and rolls. On this ride, guests will step through a secret panel at Wayne Tech headquarters where they will be recruited as test pilots for the newest prototype of the ultimate urban patrol vehicle. Launching out of the Batcave and soaring over moonlit rooftops, guests will forever remember the experience of thwarting criminals alongside Batman. This ride combines a high-tech flight simulator with immersive scenery and state-of-the-art special effects for a thrilling experience.

Amongst the shipping yards of Gotham City’s wharf, fans’ adrenaline will soar on the Scarecrow Scare Raid, a rousing flight experience that will rattle the cage of any bat or man. This ride blends wild interactive adventures with dizzying maneuvers from Scarecrow’s latest psychological experiments. This diabolical interactive experience features dramatic aerobatics and whirlwind barrel rolls, which are sure to leave an unforgettable impression.

Other exciting attractions to visit in Gotham City include The Riddler Revolution — a rocking, spinning rollercoaster designed by The Riddler himself. In addition, guests can visit The Joker’s Funhouse, a villainous twist on the classic carnival walkthrough experience. The Joker’s Funhouse features a series of physical and mental challenges conjured up by Batman’s biggest foe, including a hall of mirrors, a shrinking corridor, a labyrinth, a hallucination hallway and moving carpets— among many other memorable encounters. A host of delightfully puzzling games also await park guests at Rogues Gallery Games. Ranging from the Hi-Striker, the Whac-A-Bat, and the Get-Away Car, to the Toxic Blast and the Bazooka Blast, guests will have a chance to use their skills to reclaim Gotham Pier— a once peaceful landmark now held hostage by The Joker and his henchmen.

Hungry, law-abiding citizens can satisfy their appetites at Gotham City’s Finest — the Police Department’s own favorite hangout spot. If guests prefer living on the other side of the law, the Hall Of Doom, hidden in an abandoned subway station, hosts a dinner service for some of Gotham City’s most feared Super-Villains. If savory delights don’t do the trick, guests with a sweet tooth can visit the Mr. Freeze Ice Scream Truck for an ice-cold dessert.

Friends and families can commemorate their visit to Gotham City by visiting souvenir shops filled with mementos and memorabilia, such as Park Row Pawn Shop and Monarch Theater Gifts.

When it debuts to the public, Warner Bros. World™ Abu Dhabi will feature a total of 29 state-of-the-art rides, interactive family-friendly attractions and unique live entertainment across six fully immersive lands, including Metropolis, Gotham City, Cartoon Junction, Bedrock, Dynamite Gulch, and Warner Bros. Plaza. From the action and adrenaline-fueled adventures of DC to the wacky and wonderful world of Warner Bros. Animation, Warner Bros. World™ will offer captivating and interactive experiences that bring together some of the world’s most iconic characters and stories under one roof for the first time in the region.

Warner Bros. World™ Abu Dhabi will unveil more exciting details on the park’s six unique lands, including the unique variety of rides and attractions to be featured at Bedrock and Dynamite Gulch, along with the opening date. 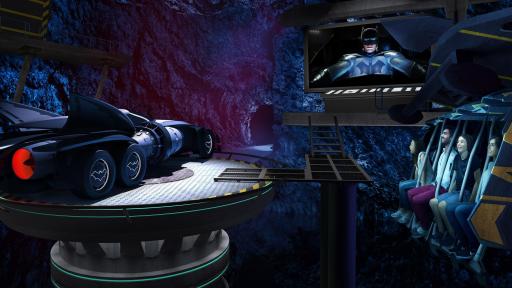 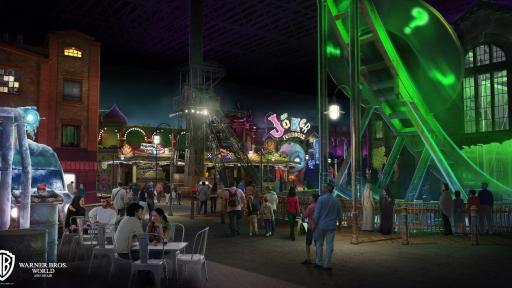 When it opens on Yas Island in 2018, Warner Bros. World Abu Dhabi will be the world’s first-ever Warner Bros. branded indoor theme park, delivering an unparalleled fan experience. Guests will be transported to six immersive lands including Metropolis, Gotham City, Cartoon Junction, Bedrock, Dynamite Gulch and Warner Bros. Plaza, and enjoy 29 state-of-the-art exhilarating rides, interactive family-friendly attractions and unique live entertainment. From the action and adrenaline-fueled adventures of DC Entertainment to the wacky and wonderful world of Warner Bros. Animation, this interactive new experience will bring together some of the world’s most iconic characters and stories under one roof for the first time in the region. Warner Bros. World Abu Dhabi – set to become one of the world’s largest indoor theme parks - will play host to DC, Looney Toons and Hanna-Barbera characters such as Batman, Superman and Wonder Woman as well as Bugs Bunny, Scooby-Doo, Tom and Jerry and The Flintstones, among others.

Warner Bros. Consumer Products (WBCP), a Warner Bros. Entertainment Company, extends the Studio’s powerful portfolio of entertainment brands and franchises into the lives of fans around the world.  WBCP partners with best-in-class licensees globally on an award-winning range of toys, fashion, home décor, and publishing inspired by franchises and properties such as DC, J.K. Rowling’s Wizarding World, Looney Tunes and Hanna-Barbera. The division’s successful global themed entertainment business includes groundbreaking experiences such as The Wizarding World of Harry Potter and Warner Bros. World Abu Dhabi (opening 2018). With innovative global licensing and merchandising programs, retail initiatives, promotional partnerships and themed experiences, WBCP is one of the leading licensing and retail merchandising organizations in the world.

DC Entertainment, home to iconic brands DC (Superman, Batman, Green Lantern, Wonder Woman, The Flash), Vertigo (Sandman, Fables) and MAD, is the creative division charged with strategically integrating its content across Warner Bros. Entertainment and Time Warner. DC Entertainment works in concert with many key Warner Bros. divisions to unleash its stories and characters across all media, including but not limited to film, television, consumer products, home entertainment and interactive games. Publishing thousands of comic books, graphic novels and magazines each year, DC Entertainment is the largest English-language publisher of comics in the world.