CHÂTEAU QUINTUS GROWS WITH THE ACQUISITION OF CHÂTEAU GRAND-PONTET 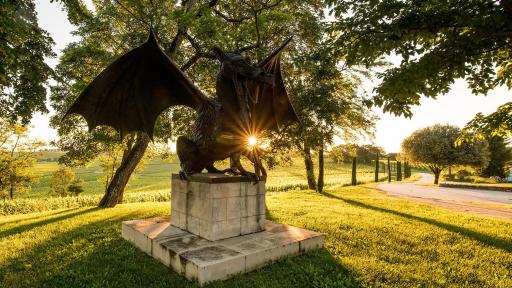 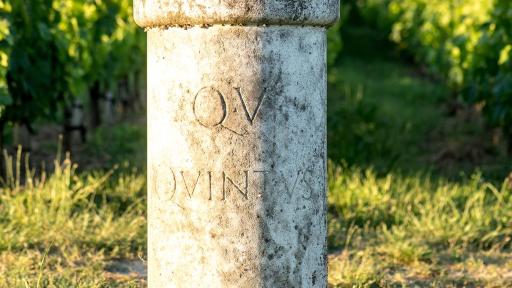 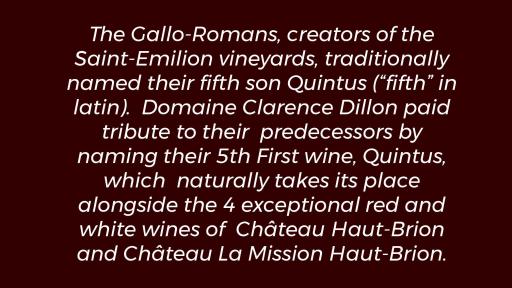 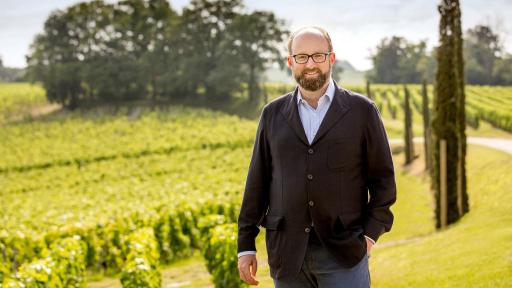 CHÂTEAU QUINTUS GROWS WITH THE ACQUISITION OF CHÂTEAU GRAND-PONTET

Château Quintus grows with the acquisition of Château Grand-Pontet

An age-old vineyard, with an extraordinary past, present and future

The history of Quintus is closely linked to that of Saint-Emilion, one of the oldest winegrowing areas of the region.  Perched on a limestone promontory, culminating at an altitude of 62 metres, Quintus offers up a breath-taking 360-degree view across the Dordogne valley.  Its topography, boasting a plateau and featuring north, west and south facing slopes, comprises an incredible abundance of micro-climates and limestone soils, especially well suited for extricating the finest qualities of the Merlot and Cabernet Franc grape varietals.

Established in 2011, Château Quintus released its 10th vintage this past year, with its highly acclaimed 2020.

“In 2011, my family, our team and I expressed our ambitious goals, with our communicated desire to craft one of the very finest wines possible in Saint-Emilion. By assembling some of the most promising parcels and terroirs we would attempt to create a new star of the Right bank; Quintus. After more than 10 vintages, I am proud to say that our exceptional winemaking team are excelling at meeting this challenge. The addition of this promising terroir at Grand-Pontet, not only re-affirms our deep commitment to this venture but also provides our oenologists with a larger and more diverse palette to be able to realise our shared dream.” 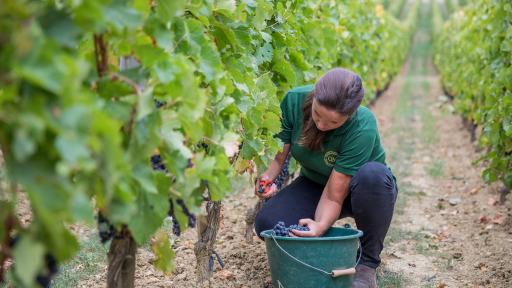 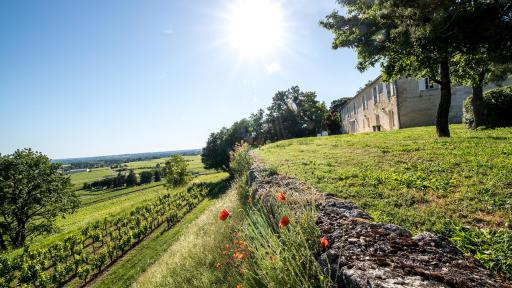 Quintus grows with the acquisition of its close neighbour, Château Grand-Pontet

Château Quintus is acquiring Château Grand-Pontet, a Grand Cru Classé, located in an exceptional position just a few metres from the famous village of Saint-Emilion and only 1 km to the north of its existing parcels. This property is surrounded by three prestigious Premiers Grands Crus Classés: Châteaux Canon, Clos Fourtet and Beauséjour Bécot, on the Western plateau of Saint-Emilion.

With the addition of these parcels, Quintus also becomes one of Saint-Emilion’s largest properties, representing 45 hectares (111 acres), 42 (104 acres) of which are planted in vines.  The addition of this illustrious historical terroir offers the wine making team with ever greater possibilities for creating their wines from a very stringent selection at this Right bank estate. 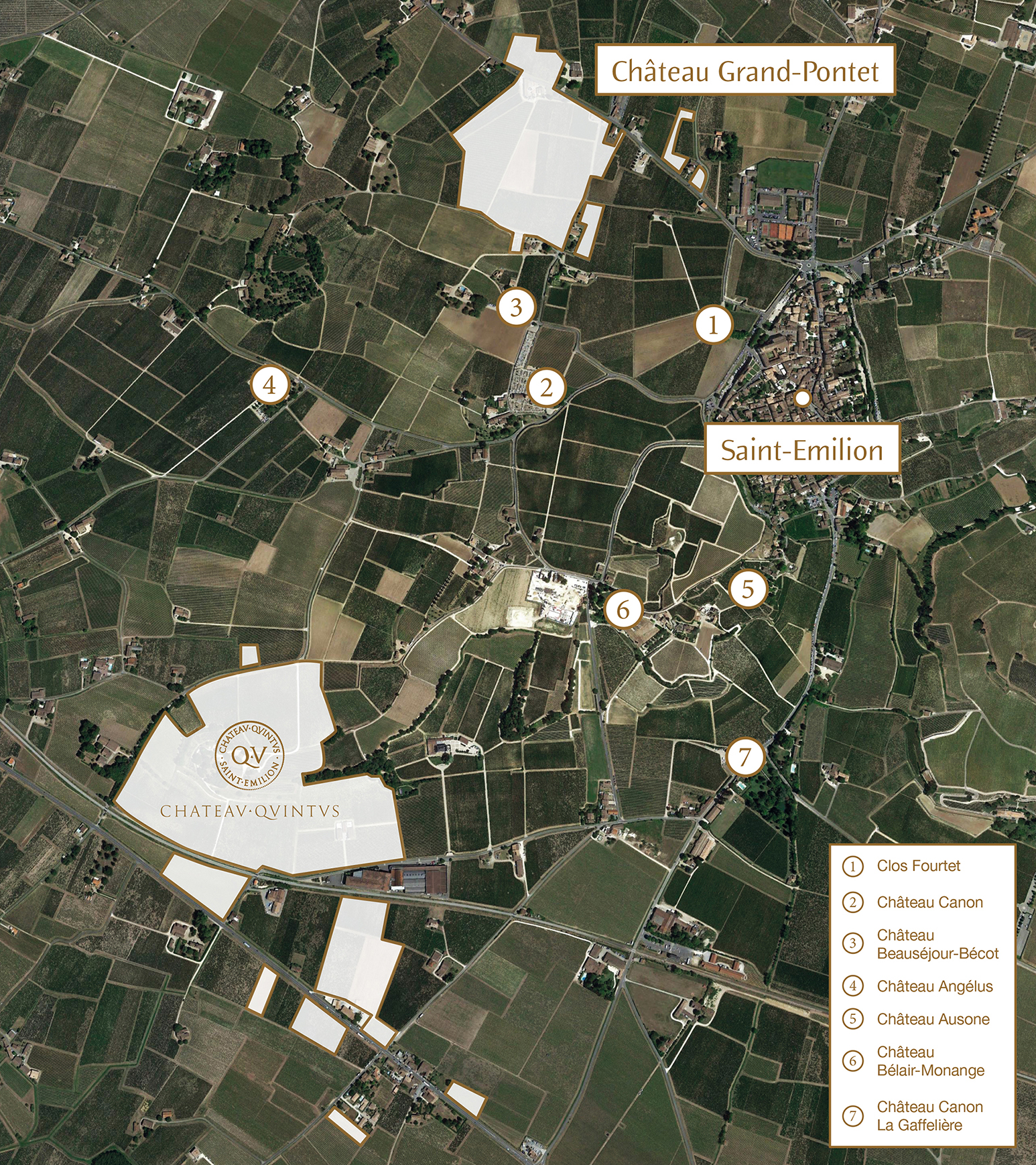 Grand-Pontet and the two prior estates, united over a decade to form Château Quintus, figure among the oldest and most exalted growths of Saint-Emilion and historically were all three featured as “Premier Cru de Saint-Emilion” in the Féret wine guide, published between 1908 and 1949.

Excerpt from the Féret wine guide of 1908, concerning Mr Combrouze, then owner of Château Grand-Pontet and Mayor of Saint-Emilion: “Giving a new lease of life to one of the oldest Premiers Crus…”

Excerpt from the Féret wine guide of 1974: “Its unique position makes it one of Saint-Emilion’s most beautiful sites.  The very old vines that form this vineyard, spared by the frosts of 1956, bring out the very distinctive character of its wine, full of power and delicacy, whose bottles are renowned for the fact of their age worthiness of fifty years and more.”

Mariette Veyssière represents the 5th generation of the Veyssière family devoted to the terroir of Saint-Emilion. Having honed her skills through numerous work experiences at Château Haut-Brion, Château La Mission Haut-Brion, Pétrus, Château Latour and in California, Mariette joined the team at Château Quintus at the end of 2013. Initially charged with QSE (Quality Security & Environment) her knowledge and responsibilities have evolved naturally over the years.  She inspires a progression in winegrowing methods at the estate.  The continuous efforts of all the Quintus teams involved in these environmental procedures have been rewarded by the estate obtaining dual certification: High Environmental Value (HEV) in 2018 and ISO 14001 in 2019.

All of these environmental considerations are shared by the Pourquet-Bécot family, whose team will now join the Quintus family under the new management of Mariette Veyssière.

The environmental specificity of Château Quintus lies in its Mediterranean Green Belt, a true haven of biodiversity. The sublime natural gardens and terraces of Quintus, representing two hectares, are enchanting from the very the first glance. These boast numerous hedgerows, majestic holm oaks, low stone walls and verdant escarpments.  These treasures of the landscape heritage that surround the plots of vines are important shelters for natural allies, vital to the success of the vineyard.

The recent inventory of the profusion of auxiliary fauna and flora of the property, carried out with the assistance of a doctor of entomology and landscape ecology, reveals a rare abundance of species: 800 types of auxiliary fauna gathered, divided into 200 different species and 80 varieties of wild flower were counted at the estate.

To supplement these natural assets and enrich this breeding ground of biodiversity, the vineyard workers sow wild flowers on fallow land on the escarpments of the hillside slope, and in plots where vines have just been uprooted.  They also plant hedgerows of local varieties, creating ecological corridors in the less wooded areas.

In order to protect this biodiversity, no insecticide product has been used at the property since 2017.