Teens were asked what would stop them from texting while driving.
Their top answer: they worry about crashing.

PRNewswire, Bloomington, Ill., October 19, 2015
In observance of National Teen Driver Safety Week, State Farm released the results of a recent survey of young drivers ages 16-19. The focus of the survey was to learn more about their attitudes and behaviors when it comes to distracted driving.

The survey revealed that nearly all teens, over 90 percent, say they understand texting while driving is distracting, yet 44 percent say they do it. When asked to choose the top three things that would deter them from reading or responding to text messages, concern about crashing was the number one answer (51 percent), followed closely by getting caught by police (50 percent). Other common responses included:

Read More
A new survey from State Farm reveals that 44% of teen drivers text while driving, despite dangers 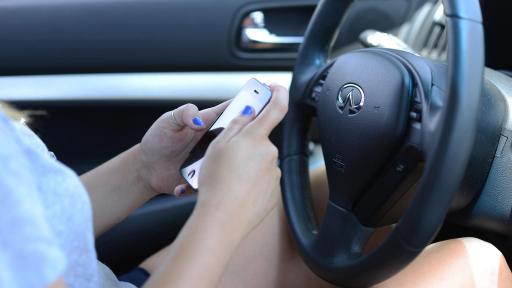 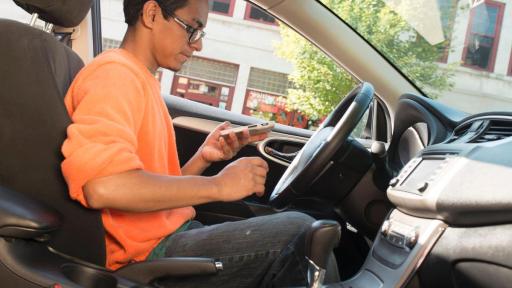 Over 90% of teens understand texting while driving is distracting 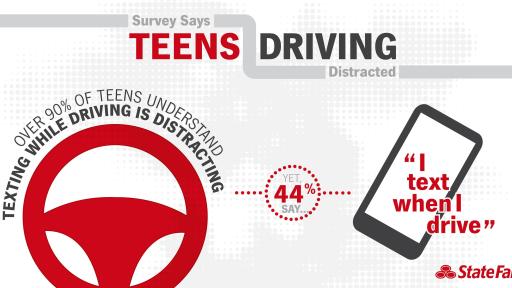 What do teens say would keep them from texting while driving? 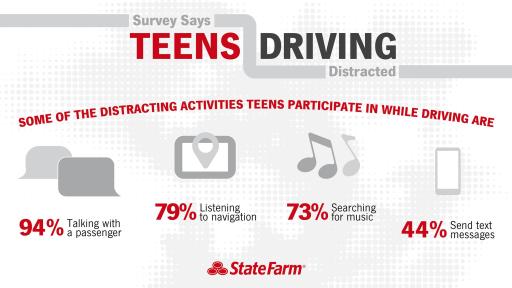 Some of the distracting activities teens participate in while driving 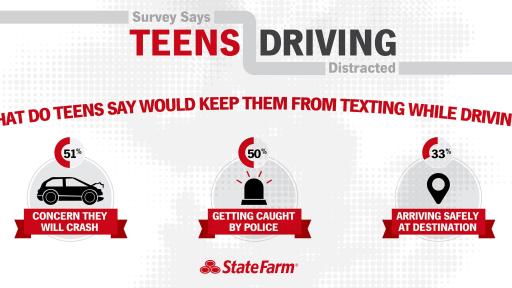 New drivers, because they are especially vulnerable to crashes, should be focusing all their attention on their drive. Yet phones are not the only distraction teen drivers told us they must contend with when they’re behind the wheel. Besides texting, teens reported searching for music, interacting with a navigation system/GPS, talking with passengers while behind the wheel and other activities which could potentially divert a young driver’s attention away from the road.

[email protected] reports over 90% of teens understand the dangers of texting while driving, yet 44% still do it. st8.fm/teen15 Tweet

“As nearly all teenage drivers now own smartphones, we must continue our work to understand and address the wide array of distractions that young people face,” said Chris Mullen, Director of Technology Research at State Farm. “This survey shows us some of the perceptions that influence distracted driving behavior for teens, reinforcing the need for consideration of the best educational, technological, and legislative solutions, and continued parental support to help curb these types of behaviors among teens.”

The State Farm survey revealed that distracting behaviors become more common among older teens, with those ages 18-19 much more likely than those ages 16-17 to report participating in the activities listed in this study.

Driving situations can play an important role in teen drivers’ decisions to participate in cellphone-related distracted driving behaviors that involve looking at the cellphone and interacting with the screen and/or buttons.

About the Survey
In August 2015, the State Farm Strategic Resources Department used an outside panel vendor to conduct an online survey of U.S. consumers ages 16-19. Survey responses were received from approximately 1,000 teens who identified themselves as having a valid driver’s license. Nearly all of the teens (96 percent) responding to this survey reported owning a cellphone, and almost all of those teens (94 percent) said they owned a smartphone and drove a median five hours per week.

About State Farm®:
The mission of State Farm is to help people manage the risks of everyday life, recover from the unexpected, and realize their dreams. State Farm and its affiliates are the largest providers of auto, home and individual life insurance in the United States. Its 18,000 agents and more than 65,000 employees serve more than 82 million policies and accounts – nearly 80 million auto, home, life, health and commercial policies, and nearly 2 million bank accounts. Commercial auto insurance, along with coverage for renters, business owners, boats and motorcycles, is available. State Farm Mutual Automobile Insurance Company is the parent of the State Farm family of companies. State Farm is ranked No. 41 on the 2015 Fortune 500 list of largest companies. For more information, please visit https://www.statefarm.com.