New Firmware and GUI Is Custom-Built For Gaming Traffic Control

Playa Vista, CA and Austin, TX – August 21, 2017– Linksys®, a leader in home and business networking solutions and Rivet Networks, makers of the award winning line of high-performance Killer™ Networking products for desktop and notebook PCs, today announced at Gamescom in Cologne, Germany, the upcoming availability of the new Linksys WRT™ gaming edition router – the WRT32X.  This first of its kind collaboration, Linksys and Rivet Networks teamed to incorporate the Killer Prioritization Engine (KPE) to provide serious online gamers the only router optimized for high-speed gaming for users with Killer-enabled gaming PCs. The KPE optimizes traffic for low latency and less lag and ensures that the Killer-enabled PC’s gaming, audio, and video is fast and smooth, while simultaneously managing other online traffic in the home to ensure other devices and activities are not compromised. The new firmware and graphical user interface (GUI) was also custom-built from the ground up with a focus on monitoring and controlling gaming network traffic.  The Linksys WRT32X is available for pre-order starting today and plans to ship starting in September 2017.

The global gaming market of more than 2.2 billion gamers are expected to generate $109 billion dollars of revenue this year of which 27% is from PC Gamers and 31% from Console Gamers or combined 58% according to the latest Global Gaming Market Report from Newszoo. “Serious gamers are spending money on game play and expect to have technology that provides significant advantages to beat their opponents”, said Vince La Duca, global product manager at Linksys. “The Linksys WRT32X provides advantages that no other routers have – and that is the Killer Prioritization Engine. The router, when paired with a Killer-enabled PC –from makers such as Alienware®, Gigabyte®, MSI® or Razer®, and others provides a powerful end-to-end connection to prioritize gaming traffic to reduce peak ping times up to 77%*, providing a real advantage for faster kills over opponents that use regular “so-called” gaming routers.” 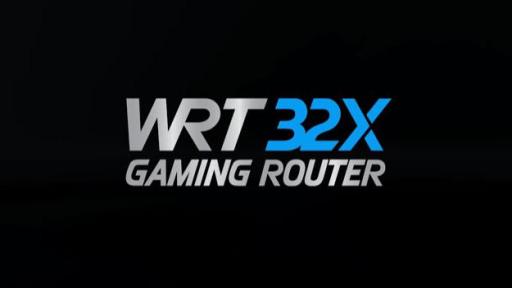 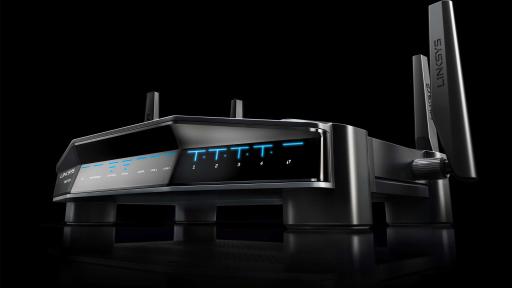 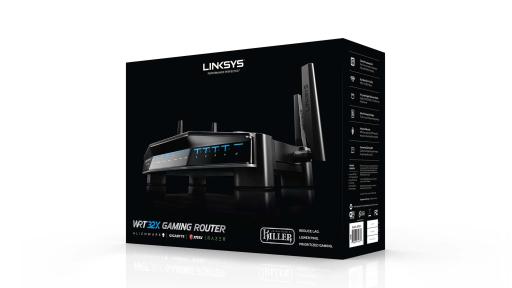 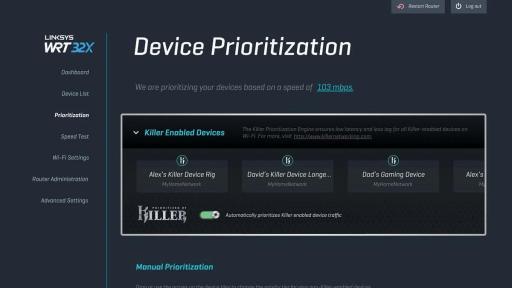 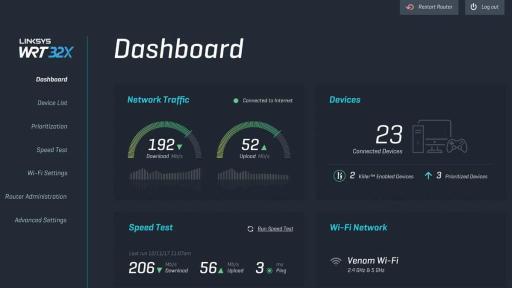 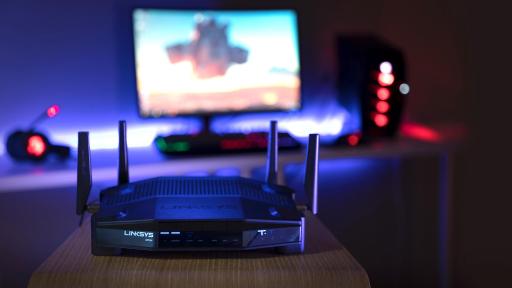 La Duca continued, “When exploring how online gaming enthusiasts used their internet connections and the networking technology in their home, we witnessed use of what others called "gaming routers", but on deeper investigation, all we found were standard consumer routers but with some "gamer-bait" visual accents coupled with some smart marketing, but no real technical substance or innovation. This drove us to create a true gaming-focused router that delivers the best networking experience for online gaming with low latency and the fastest speeds. The WRT32X utilizes enterprise-grade hardware DNA found in the WRT line of routers, but the WRT32X takes on a unique persona from both a visual standpoint as well as a firmware/software perspective. The new stealth livery informs this is not the WRT router you know, but WRT as a performance networking platform built to deliver the best online gaming experience.”

“Integrating Killer Networking technology to the WRT32X is a huge win for gamers” said Bob Grim, vice president of marketing and business development at Rivet Networks. “For the first time, Gamers will have a router that is designed specifically to work with their Killer-enabled PCs to identify and prioritize important gaming network traffic and ensure their online gaming experience is fast and smooth no matter what else is going on in their home network.”

The Killer Prioritization Engine (KPE)
The WRT32X utilizes the Killer Prioritization Engine (KPE) to determine which devices are connected to the router that are enabled with and using Killer Networking hardware. This hardware can be found in gaming and performance PCs and motherboards from companies like Dell® (Both Alienware and XPS models), Gigabyte, MSI, or Razer, as well as Acer®, Lenovo®, and more.

The KPE works in tandem with Killer-enabled computers to prioritize important gaming and video networking traffic above other devices in the home.  When a user starts a game, the Killer hardware on the PC communicates with the router and tells the router to treat the gaming packets special and with high priority.  If the network is bogged down from other users, the WRT32X is able to keep the gameplay fast and smooth because it prioritizes the Killer game traffic above other traffic in the home.  Conversely, the PC also communicates to the router when a less important activity is taking place (like a download) so that the router won’t let the download impact the Internet experience of other users in the home.

Since network priorities are fully customizable on Killer-Enabled PCs, the KPE on the WRT32X is able to honor those priorities.  So if the user configures the Killer Control Center to make streaming videos their top priority, the WRT32X will treat those packets like gold and ensure nothing in the home slows down those streaming video networking packets.

The Custom-Built Firmware and Graphical User Interface (GUI)
Gamers will also welcome the new custom-built firmware and GUI specifically for this WRT32X.  The firmware won’t be found on any other router.  The GUI is used to promote important network settings for gaming, provide network usage statics, and it’s wrapped in a design that appeals to gamers while matching the edgy design of the WRT hardware. The new GUI also has a unified responsive design across the desktop, tablet and mobile device.

Users on a Killer-enabled PC will also now see a “router” tab on Killer’s Control Center App on the PC when the WRT32X is attached.  This provides easier access to router KPE controls for settings while gaming without launching the router GUI.

The WRT32X will be on display at the Linksys Booth - Hall 5, Stand D042 at the Gamescom show in Cologne Germany this week.

Pricing and Availability
The new Linksys WRT32X Wi-Fi Gaming Router is available for pre-order starting today at Amazon, BestBuy.com and Linksys.com and plans to begin shipping September 21, 2017. The WRT32X will being rolling out to leading retailers such as Best Buy, B&H, Fry's, Micro Center, New Egg and Target, throughout September for an estimated MSRP of $299.99 USD.

About Rivet Networks
Rivet Networks is a technology and products company that focuses on creating the best possible networking experience. Rivet offers a mix of hardware, software, and cloud-based technologies to deliver solutions that are both powerful and intuitive. Through their Killer™ line of networking products, Rivet Networks offers unprecedented speed, intelligence, and control for gamers and performance users alike. For more information about their Killer brand of technologies, please visit www.killernetworking.com.

About Linksys
The Linksys brand has pioneered wireless connectivity since its inception in 1988 with its leading innovation and engineering strategies, and best-in-class technology, design, and customer service. Linksys enables a connected lifestyle for people at home, at work and on the move, and with its award-winning products, simplifies home control, entertainment, security and Internet access through innovative features and a growing application and partner ecosystem. For more information, visit linksys.com, like us on Facebook, follow us on Twitter or watch us on YouTube.

*Killer reduces peak ping by 77% calculated from the reduction of peak ping rate from 74 milliseconds (ms) to 17 ms when using the Killer Prioritization Engine on the WRT32X and a Killer-enabled PC using a 10 megabits per second (Mbps) down/2Mbps up internet connection that has mul­tiple devices consuming the 10Mbps connection.

‡ The standard transmission rates—450 Mbps or 2600 Mbps (for 5 GHz), 600 Mbps (for 2.4 GHz), 54 Mbps—are the physical data rates. Actual data throughput will be lower and may depend on the mix of wireless products used and external factors. Maximum performance derived from IEEE Standard 802.11 specifications. Actual performance may vary, including lower wireless network capacity, data throughput rate, range and coverage. Performance depends upon many factors, conditions and variables, including products used, interference and other adverse conditions. In order to achieve the best performance, this router must be used with a compatible AC2600 wireless device. Specifications are subject to change without notice.  An active, customer-purchased Internet Service Provider broadband account is required for connection of these routers and other connected computers and devices to the Internet.  Some devices may require additional wireless adapters or an Ethernet cable to connect to these routers. May require a software/firmware update available for download at linksys.com/support.

© 2017 Belkin International, Inc. and/or its affiliates. All rights reserved.

LINKSYS, WRT and many product names and logos are trademarks of the Belkin group of companies. Third-party trademarks mentioned are the property of their respective owners.