About the Alberta Securities Commission

The Alberta Securities Commission (ASC) is the regulatory agency responsible for administering the province's securities laws. It is entrusted with fostering a fair and efficient capital market in Alberta and with protecting investors. As a member of the Canadian Securities Administrators, the ASC works to improve, coordinate and harmonize the regulation of Canada's capital markets.

Every year, the ASC delivers a PR campaign in conjunction with Fraud Prevention Month with the goal of educating Albertans on ways to recognize and avoid common scams. “This time, we wanted to do something more impactful than we had in the past,” said Nicole Tuncay, Senior Communications Advisor at the ASC. “Scam artists are good at what they do, so it can be easy to fall for a scam. No one is really safe.”

ASC deployed a three-part campaign to maximize the Fraud Prevention Month hook. To give the campaign a longer lifespan, each part was designed to feed CheckFirst, the ASC's consumer website, which provides information, quizzes, and case studies on recognizing and avoiding investment fraud. Pre-Event

To create dramatic impact (and a share worthy educational moment) the ASC produced a fake real estate investment seminar modeled after those produced by actual fraudsters. “We consulted our enforcement team on every detail to truly replicate a real investment seminar put on by scam artists,” said Tuncay.

An actor was hired to play a high-ranking financier at the non-existent firm, Maplestock Investments. The team created a fake online presence for Maplestock Investments that included a company website, Facebook page and even a LinkedIn profile for the actor. The seminar was marketed heavily on channels commonly used by scam artists such as Eventbrite, Facebook, Craigslist and Kijiji.

The group also planted plenty of “red flags” within the campaign -- opportunities for would-be investors to discover the truth. For example, neither the fake company or the financier were registered with the ASC, which is a requirement for selling investments in Alberta. Furthermore, the event ads included promises of “guaranteed returns.” No investment is a guaranteed money-maker.

Halfway through the well-attended event, the audience learned that the entire seminar was a set up. Video footage was edited into a powerful educational video that shows the reveal and the shocked reactions.

Post-Event To promote the successful stunt to the public, the ASC's PR agency, Edelman, recommended using Cision's Multichannel News Release (MNR), a custom web page designed to host and promote multimedia content. Here, the team was able to consolidate and showcase all the campaign's assets alongside a news release (also distributed by Cision Distribution by Canada Newswire) explaining how the event came together, why the ASC did it, and summarizing the red flags investors need to watch for when considering an investment opportunity. The MNR also contained a click-to-tweet option right at the top, allowing readers to share the story quickly and easily. 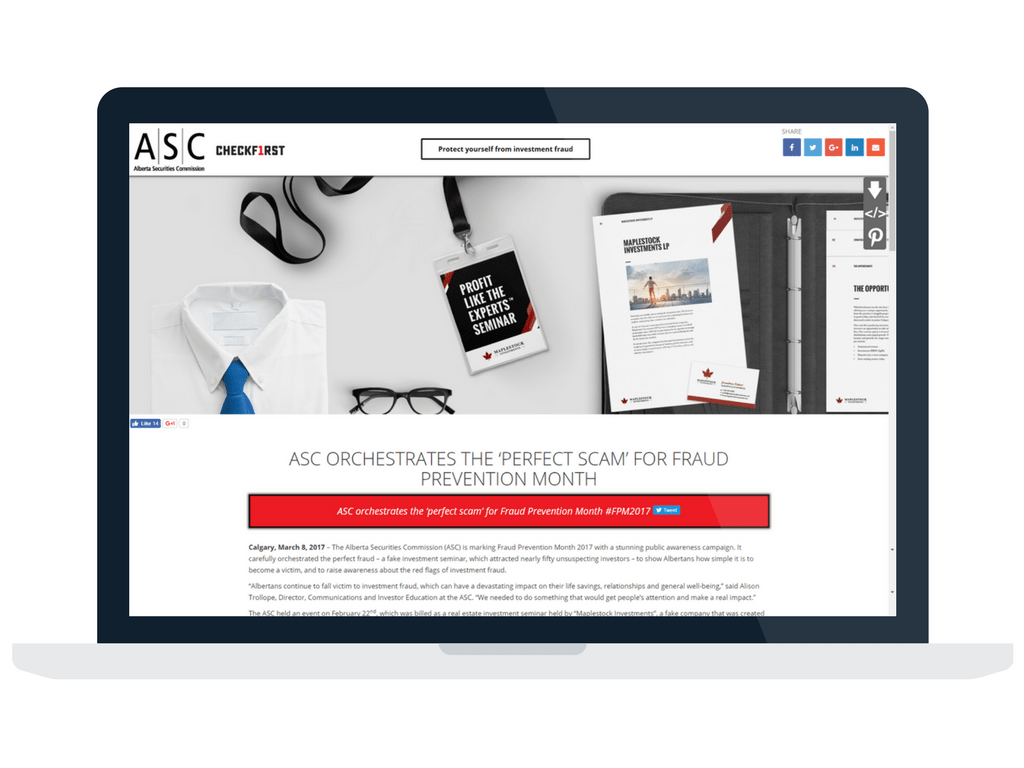 “We saw the Multichannel News Release as an efficient and effective way to have all of our multimedia assets available in one place,” said Tuncay. “We didn't invite media to the event, so it was important to have those assets readily available for them to understand our message.”

From start to finish, the ASC saw stunning results throughout its campaign. The event advertisements were viewed by Albertans nearly six million times and more than 8,500 clicked on links within those ads. The event itself drew 48 registrants with 22 actual attendees.

The ASC was particularly satisfied with the reach and engagement with its MNR promotion. “We received multiple interview requests within the first day of the Multichannel News Release site going live,” said Tuncay. The multimedia assets each saw hundreds of views and the ASC's investor education website, CheckFirst.ca, received a spike in traffic. The MNR also generated multiple social shares on Facebook, Twitter and LinkedIn.

While most earned media coverage was local within Alberta, the ASC also received national and international coverage from several outlets including CBC, Financial Post and Bloomberg. “We aimed to grab the attention of Albertans, but were excited to see that our campaign was noticed by national and international media outlets,” said Tuncay. Using Cision Distribution by Canada Newswire's Visibility Reports feature, the team could see that MNR traffic spread beyond national borders to several states within the U.S. 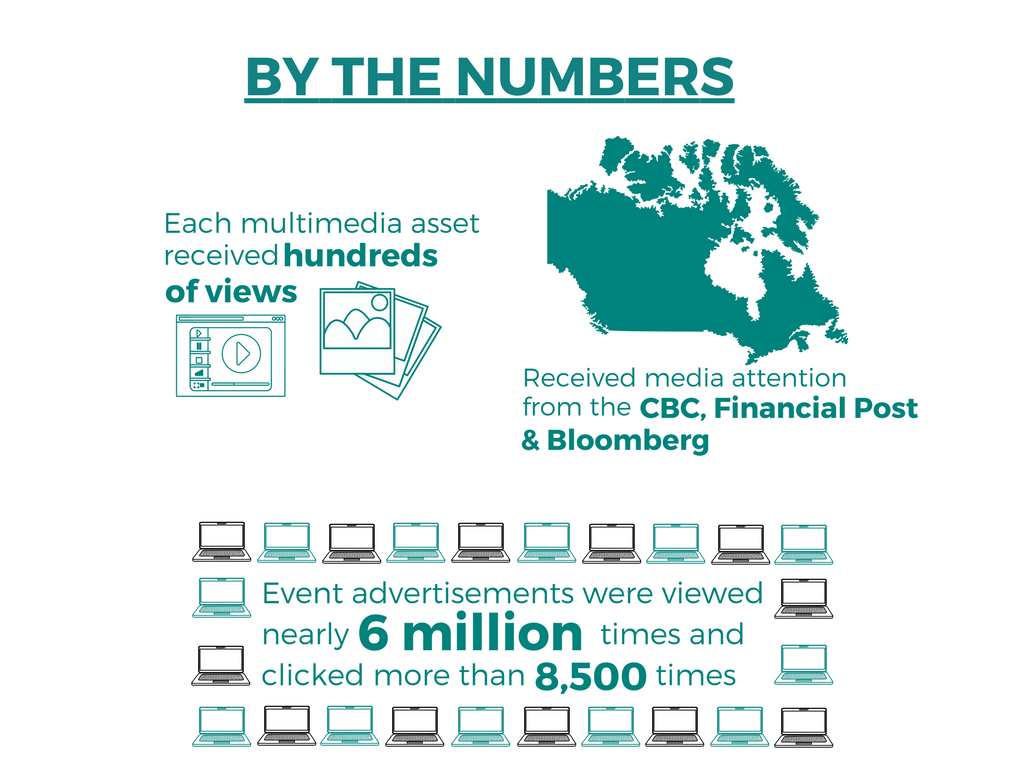 When it came to the design and delivery of the Multichannel News Release feature, the ASC's experience was quick and efficient. “Our turnaround time was much faster than what was quoted,” said Tuncay. The MNR design replicated the CheckFirst website, ensuring consistent branding across all campaign assets.

Tuncay's advice for PR professionals looking to use a Multichannel News Release? “Ensure that you have multiple assets to share on your page (images, videos, etc.) to maximize your audience engagement.”