Raynaud's Association Gets Interactive with MultiVu

Raise awareness and educate the public about Raynaud's Phenomenon during Raynaud's Awareness Month in October.

The Raynaud's Association partnered with MultiVu to produce a Multichannel News Release (MNR) to reach media and consumer audiences across the web, and an interactive quiz (Catalyst) to give visitors a quiz self-check for common symptoms.

The Raynaud's Association is a national non-profit 501(c)(3) organization whose mission is to provide support and education to the millions of sufferers of Raynaud's Phenomenon, an exaggerated sensitivity to cold temperatures.

The Association was created to raise awareness and educate the public about Raynaud's, which can be painful and, for some, may cause serious blood vessel damage. The Association exists to help people understand that Raynaud's should not be dismissed as a mere nuisance. Seeking medical attention is important both to find treatment and to rule out the possibility that an underlying, serious disease may be causing Raynaud's symptoms.

The Raynaud's Association is a non-profit organization dedicated to raising awareness and educating the public about Raynaud's Phenomenon, a widespread but little-known medical condition that reduces blood flow to the small blood vessels of the extremities. When a person with Raynaud's is exposed to cold or stress (or both), their hands and/or feet may spasm or change colors, and they are likely to experience an exaggerated level of pain, numbness, throbbing, and/or tingling in their extremities. The organization also provides a haven where Frosties – the name that those with the syndrome call themselves – can learn about and discuss treatments and remedies with each other.

Raynaud's affects an estimated 15 to 30 million people in the U.S., but only ~10% of sufferers are aware that there is a medical name for their pain and discomfort. This gap in recognition provides the Raynaud's Association with a huge opportunity each October as the temperatures are starting to drop to raise awareness about Raynaud's in an effort to promote treatment options and empowerment resources for Frosties in time for when they will need it most.

"[Some] Doctors will tell you there's nothing you can do for it. Move south, or learn to live with it, and wear gloves to keep yourself warm," explained Lynn Wunderman, founder and chair of Raynaud's Association. "But there are drugs – both topical and oral – that won't [make it] go away but will open blood vessels to help blood move more freely and provide some relief." Wunderman also explained that there are some lifestyle changes that can help Frosties live a better life, but for them to learn about those, they need to know about Raynaud's in the first place!

Over the next few years, they continued to add to their best practices and tactics for getting the word out: they produced two public service announcements (PSAs), and in 2018, they added a Multichannel News Release (MNR) to their efforts. The MNR offered the opportunity to include several engaging assets, including infographics, public service announcements, and a live video of a Raynaud's attack. Plus, the MNR included several call-to-action links for generating traffic to the organization's educational resources, marketplace with helpful product reviews, membership sign-up form, and donation page. The MNR+digital resource combo received great coverage, resulting in 103% more traffic than the press release+multimedia asset distribution from 2017's campaign.

For 2019's campaign, in contrast to previous years where themes were a little more playful ("zombie hands" in 2017 and "the cold shoulder" in 2018, to name a few), this year's was a little more serious. "Ninety percent of people living with Raynaud's have the primary form (no underlying ailment and no medical explanation for cause); the other 10% have the secondary form where their Raynaud's is a byproduct of a more serious autoimmune disease," says Wunderman, so for 2019, the emphasis was on taking Raynaud's seriously.

Getting the Word Out

Based on the strong results from 2018's MNR, it was a given that the MNR would be a main component in 2019's campaign. To give an extra boost to consumer engagement, the Raynaud's Association inquired if the team could develop an interactive quiz as the call to action for the MNR page, and the team suggested taking advantage of its new Catalyst (interactive content experience) product for this capability. This led to the creation of a quick, interactive quiz to give site visitors a self-check for common symptoms and to encourage their exploration of the educational resources on Raynauds.org.

MultiVu's client success team was by Wunderman's side every step of the way. "We provided copy, and your folks made it look attractive on the page. They picked it up quickly, took the ball, and ran with it," she said. "The quiz was up in a week; I was very impressed with how fast your team could pull that together."

Once the MNR landing page and Catalyst quiz were in their final state, including a prominent call to action featuring the new quiz, MultiVu executed the MNR's distribution package. A link to the landing page and its quiz and multimedia assets were distributed on the wire and shared on PR Newswire's related industry Twitter feeds. As part of the MNR package, an awareness photo showing a patient's fingers turning white during a Raynaud's attack was shared on a digital billboard in Times Square. The PSA video was shared on video sites. The pageview guarantee delivered traffic directly to the landing page. 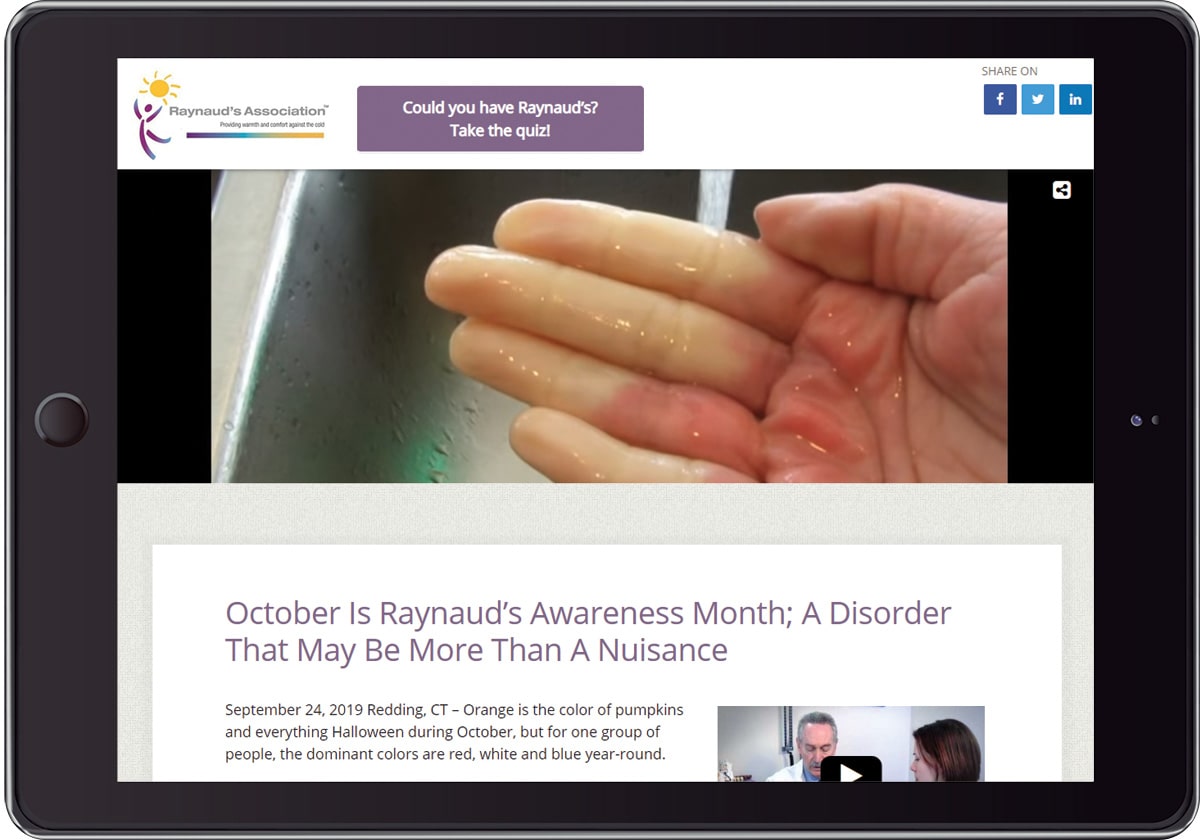 For their own promotion, the Raynaud's Association featured the quiz on Raynauds.org and shared it on their social media sites using a hashtag campaign centered around #raynaudsaware. In addition, the Association also launched Google search ads to drive traffic through Google's non-profit grants program. "We want to reach a huge audience," Wunderman explained, "and Google offers the ability to get the word out about Raynaud's to potential sufferers when they are searching for information and resources. Our campaign efforts could change someone's life and help them find relief."

Because Wunderman has been systematic in adding tactics each year, she has been able to effectively track the results of each new component, looking at the increases from September to October across the years. For example, she always sees an uptick in newsletter sign-ups and Raynaud's guidebook pageviews around the October Awareness Month campaign. Since using MNRs, their seasonal lift in guide impressions has roughly doubled, and the lift in newsletter sign-ups has more than tripled. "While we always see a seasonal boost between September and October months, what the numbers demonstrate is that the lift in October traffic after we started using the MNRs nearly doubled in 2018 (up 103% vs. 59%). Adding the quiz in 2019, the boost more than doubled again (up 240% vs. 103%)!" Wunderman shared.

The success of using the Catalyst interactive quiz was apparent very quickly. Within the first week the Catalyst quiz went live, ~300 people had taken the quiz. By early November 2019, 4,300 people (and counting) had taken the quiz, and 600 had visited the Raynaud's Association's web site from the URLs featured on the quiz results page. Diligent usage and tracking of UTM codes – in addition to the in-depth reporting from the MNR and Catalyst platforms – helped Wunderman attribute the strength of incoming traffic from both the MNR and quiz

"Between Google search ads promoting the information and the MNR with the quiz behind it, I feel that everything was working well together and was well-orchestrated to get the most out of each of those efforts," said Wunderman.

View All Success Stories
Next StoryBANFIELD